REVIEW & GIVEAWAY: WORTH THE WAIT by JULIE ANN LEVIN 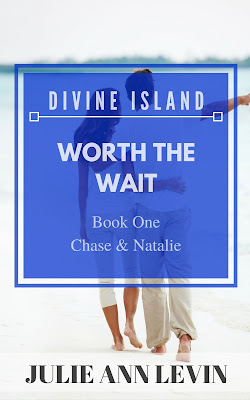 For Chase Hammond, being back in Divine Island is temporary. But with Natalie all grown up, and tempting him with her gorgeous curves, it's hard for him to remember that fact. Except with Natalie determined to keep their relationship casual, Chase knows he needs to do all he can to convince her that he's nothing like her ex, and that giving him a chance could lead to a love that will last forever.


Right from the beginning, Ms. Levin blew me away with this story, as it contains a few tropes that I enjoy. Those being the friends to lovers, the sisters best friend, and the second chance romance tropes. Immediately, I was drawn into this story due to the teasing banter between Chase and Natalie. Certainly, she likes to prove how capable she is and that she doesn't need anyone because she's already been let down by the man she married and is now divorced from. However, it just goes to show that someone needs help every once and a while, whether they want it or not.
The dialogue was compelling, and I loved the challenge Natalie provides Chase. Who knew she was so stubborn? Didn't she know that asking for help isn't a weakness? There were some really good light-hearted moments between Natalie and Chase as well as the main and secondary characters that had me smiling. The Hammonds treat Natalie like family, and it was nice to know that they would stand by her side, if Chase didn't realize how much the heroine meant to him and that their relationship was worth fighting for.
I really liked both Chase and Natalie as well as the secondary ones. Chase's family desperately want him to come home more regularly or even permanently, and I liked their advice on the couple's growing relationship, especially Chase's mom. He needed a reason to convince Natalie that he wanted her, and  his mom certainly provides him with one. While Chase's brothers, I liked how they treated Natalie, and that they would do anything to protect her.
Natalie is strong, brave, independent, stubborn and tenacious. She's determined to become a registered nurse, and works hard to achieve her goal. Because she already makes an excellent nurse with how she interacts with her patients as well as Mr. Hammond whose life she saved. I felt sorry for her when it came to her family. Aren't parents supposed to be proud of their children, even if they don't follow the path their parents expect of them? How could parents be so cruel? How could they let her sister-in-law be so negative towards the heroine? Luckily, she has Chase by her side to set them straight.
While Chase, he's kind, caring, and I liked how determined he was to make things right with Natalie. He's also out to prove that he's a good guy to his parents. That he is no longer the out of control man he used to be and is someone to be proud of. Then there's the way he is with Natalie. They have really good chemistry, which eventually spills over onto the pages in hot sex scenes.
Overall, Ms. Levin has penned an incredible read where the fast-paced plot kept me entertained from start to finish. The way this story ended was perfect, as Chase didn't give up on Natalie. He wasn't about to let her get away when they were so right for each other. I would recommend Worth the Wait by Julie Ann Levin, if you enjoy the friends to lovers trope, the sister's best friend trope, or second chance romances.
OVERALL RATING:

BLURB:
Tropical beaches and second chances...
As a rule, Chase Hammond avoided going home to Divine Island whenever possible. But when his father has a heart attack, he's left with no other choice but to go back and hope that he can avoid trouble and stay focused.
Recently divorced and struggling to keep all the elements of her life together, Natalie Rey has absolutely no desire to make her life any more difficult than it already is. But when Chase Hammond shows up on her doorstep, the man who rejected her years earlier, she'll have to do her best to avoid the monumental distraction.
The last thing either of them needs is their sizzling chemistry getting in the way of their goals.
Can Natalie resist the sexy man who broke her heart years ago?
Will allowing him back into her life only lead to more heartache?
Buy Links:       Amazon 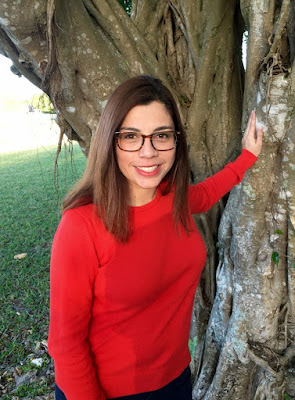 
Julie Ann Levin grew up in Miami, Florida. She graduated from Florida State University with a degree in English, majoring in Creative Writing. She loves to read all genres of Romance and especially loves contemporary, suspense, and paranormal.

She is known to binge read and is always binge writing.

Worth the Wait is the first book in the Divine Island Series and it’s a second chance romance about long-time friends Natalie Rey and Chase Hammond. It’s so hard to pick your top three scenes from your own book, but here we go…

Favorite Scene #1
Natalie owns two houses that sit on the same property. She’s allowed Chase to stay in her rental house while he is in town. Mind you, Natalie hasn’t seen Chase in eight years, and she’s harbored a crush on him since she was a teenager.

----------------------------
The next morning, Natalie groaned at the sound of her phone ringing in her ear. She'd studied late into the early morning for an upcoming exam and managed only four hours of sleep. There'd been studying, but she'd spent some of that time staring up at the ceiling and thinking about Chase.
Her phone continued to scream. With her eyes still closed, she reached out to turn it off but hit her glass of water instead.
“Whoa,” Chase said.
Natalie's eyes flew open. She gasped, her hand flying to her chest, as Chase righted the glass on her nightstand.
Words. She needed words. To come out of her mouth. Instead, she was broadcasting the beating of her heart loud and clear. Not even her phone was as loud as the sound of the blood rushing in her ears.
Chase stood before her, in her bedroom of all places, just out of the shower. He wore nothing but a towel, her towel, hanging dangerously low on his waist. She couldn't focus on any one part. There were his shoulders, arms, and his chest poised right above a set of abs that made her brain short circuit and her mouth water. But none of it compared to the glorious vee that dipped low into the towel.
“Wh—What are you doing?” she asked. Tiny droplets of water slid down his shoulders and ran down his chest.
“Are you going to get that?” Chase asked, pointing at her phone.
She could only manage to blink up at him.
“Water heater's broken in my place. You were dead to the world. I didn't think you'd mind.” His head cocked to one side, and the corner of his mouth tipped up in amusement. “You're not all there in the morning, are you?”
Natalie lunged for her phone to turn the alarm off. The only other choice was to continue staring at Chase's might-as-well-be-naked body.

Favorite Scene #2
Natalie has been friends with the Hammond brothers for almost half her life, and since Chase is staying at her house, they have no problem making themselves at home.

“This is funny to you guys?” Natalie asked. “Ruining my dating life? I can't believe you offered him a beer. It was awkward enough that the man had to return me to my house with three men sitting on my front porch.”
Natalie walked inside her house and shut the door. In the kitchen, she filled a glass of water from the tap and drank. The front door opened and closed. Chase was there and Natalie met him in the living room, geared up for a fight.
“Where are Tweedledee and Tweedledum?” she asked.
“What does that make me?”
“The dodo bird.”
“They went home,” he said, his face tightening.
“All of a sudden everyone knows how to disappear?”
“Why, were you going to invite Steve in?”
“It's Dave,” she said, with over pronunciation. “And probably not. But what does it matter to you if I did invite him in?”
“It matters to me because I had my tongue down your throat not eight hours ago. I'd venture a guess it would matter to him too.”

He closed the door behind him as Natalie came barreling down the stairs and jumped him. He caught her, which wasn't easy, but they didn't fall over. She had glue and small scraps of discarded wallpaper in her hair.
Between the sand and the glue, Natalie's hair was getting wilder by the second.
She had a little piece of a cookie crumb in the corner of her mouth, but he wasn't about to tell her it was there. Later, when she found it, she'd yell at him for not telling her, and he would pretend like he hadn't even noticed.
Her eyes were wide and bright, and she ran her fingertips across his unshaven face. “I can't wait to show you what I found.”
“Upstairs or downstairs?” he asked.
She hesitated. “Wait, I'm enjoying this too.” She slid her hands down his arms, feeling his muscles. He flexed for her because he was a guy and that's what guys do: act stupid around pretty women.
He needed to tell her about the job. That he was leaving. But he couldn't bring himself to do it, not when she was looking at him like that.
He kissed her, supporting her bottom with his hands. Her hands slid into his hair. He didn't know how long he kissed her, but it was long enough that his arms were getting tired. But there was no way in hell he was going to let on that she was getting heavy.