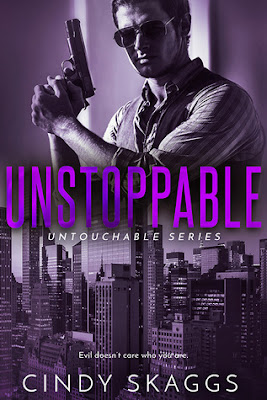 In Unstoppable (Untouchable #4) by Cindy Skaggs, Destiny Harper will do whatever it takes to protect her witness; a young boy who has lost everyone he cares for. Going on the run from the bad guys is her only option, but having Mick Donovan by her side is a distraction. Even worse, he's wanting her to return to the one place she never ever wanted to go back to. But with a dangerous threat hanging over all of their heads, she realizes she has no choice. Will the bad guys find them before the FBI Task Force Harper is a part of find the evidence needed to take down a dangerous man that believes he's untouchable, or will she and Mick win to have their chance at happy ever after?

Although I have enjoyed the other books of this series, I believe this one is the best. With such a wild and thrilling start to this story, I found myself flipping the pages quickly, determined to find out what would happen to the hero and heroine, as they did their best to protect a young boy from a very dangerous man. However, it was the growing relationship between the hero and heroine and their back stories that really had me intrigued, because Mick and Destiny know that any distraction could get one of them killed.

The dialogue was riveting and intense due to the main characters back stories and all that this couple go through in trying to get the information they need to put a really bad guy away, so he can't hurt anyone else. Who betrayed them, forcing Destiny to face her past; a past she'd rather continue to forget? Why is Mick determined to use any means necessary to see justice served, even if it means working outside the law? Moreover, the dialogue wasn't all intense and I liked every moment between the hero and heroine. There's some seriously strong chemistry between them, which is impossible for them to resist no matter how hard they try. Until eventually, their chemistry spills over onto the pages in nicely-detailed sex scenes.

Both the main characters, as well as the secondary characters kept me entertained from start to finish, especially the heroine due to her back story. Destiny's past is something she never thought she'd have to face, but the only way to protect the boy in their custody is to face it, no matter how hard it is for her. Reuniting with her aunt isn't easy, but I liked how they got along. Her aunt is an absolute hoot the way she teases Destiny. Furthermore, Destiny is strong and brave the way she faces everything thrown at her such as an ex-boyfriend who is a total jerk that deserves everything Destiny does to him and the major twist that the bad guys know will keep her from disrupting their plans. Will Destiny be able to convince those she needs to that she didn't do what they're accusing her of? Also, I liked how determined she is to protect the boy and make certain nothing else bad happens to him. He's already lost too much and doesn't need to lose anyone else, especially those that are protecting him.

While Mick, he's a total bad boy, determined to see justice served by any means necessary and I liked that Destiny wasn't about to let him do what he suggests. Since the boy under their protection does not need to be placed in any more danger than he's already in. Although, in saying that, I could understand why he suggests such a plan, because his brother and all the bad guys other victims deserve justice. I also liked how protective Mick was of the heroine, even though he knows she can handle herself, which is proven by what she does to her ex.

Overall, Ms. Skaggs delivers a fantastic read in this book, which was filled with the perfect combination of romance and suspense and made this story a total page turner. The way this story ended had me on the edge-of-my-seat due to the danger the main characters face. Would they both survive and be able to keep the boy safe? However, it was the epilogue that wrapped everything up perfectly, as I learnt how far the main and secondary characters have come since what happened to them. As if Destiny would ever be able to resist Mick. I would recommend Unstoppable by Cindy Skaggs, if you enjoy romantic suspense, the sexy protector trope or books by authors Kaylea Cross, Katie Ruggle, Incy Black or Dana Marton.

BLURB:
Bad boy Mick Donovan has dedicated his life to avenging his brother’s death, even aligning himself with an FBI Task Force to achieve his ends. Which leads him to the mess he's in now--undercover as the husband of the woman he's been fantasizing about, despite knowing how off-limits she is, to protect an innocent child.
After an ambush, Destiny Harper is on the run and out of places to hide from a ruthless drug lord hellbent on claiming his son. Charged with protecting the boy, Dez lands in the mountains on a collision course with Mick, a blizzard, and a past she’d rather forget. But even as the close quarters ignites the passion between her and the sexy biker, she knows there's no future with him. Mick will sacrifice everything for revenge—even her.
BUY LINK:  Amazon