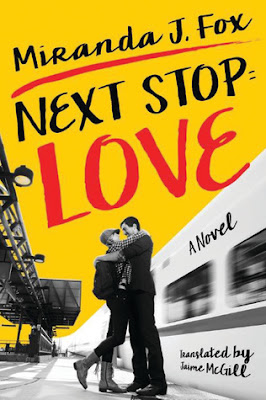 In Next Stop: Love by Miranda J. Fox, Sophia Neumann has decided it’s time to start living her life the way she wants, instead of continuing to follow the expectations dictated by her overbearing mother. An interview with an entertainment company is the perfect opportunity to start afresh. Yet, she has to survive the train ride to Berlin first, after a ticketing error forces her to share a train compartment with sexy businessman, Luca Marcs. Read Full Review @ HJ>>>
OVERALL RATING:

Publication: September 15th, 2015 | Amazon Crossing |
Twenty-five-year-old Sophia Neumann has a big interview in Berlin, and if it goes well, the new job will allow her to escape her overbearing mother and make a life on her own. Unfortunately, the trip starts off on the wrong foot when she is forced to share a train compartment with an arrogant and devastatingly handsome businessman, one who both provokes and intrigues her. Once they arrive, Sophia is relieved to leave him behind—until she walks into her interview at Marcs Entertainment and discovers that he’s Luca Marcs, her potential new boss.

With office politics in mind, Sophia is determined not to mix business with pleasure. Yet what began as discord soon turns to desire, and when Luca reveals his feelings for her, Sophia will have to ask herself: Is this just a case of interoffice lust, or is Luca the real deal?