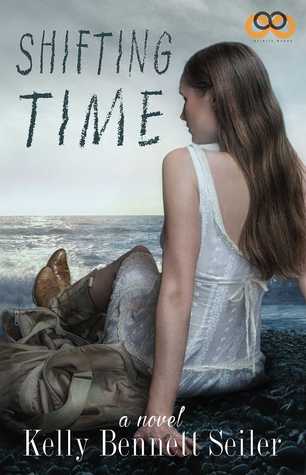 In Shifting Time by Kelly Bennett Seiler, it’s been fifteen years since the death of her high-school sweetheart, Daniel. Yet, the pain of losing him hasn’t faded one bit, for Meade Peterson. She’s often wondered what life would be like if Daniel had lived. At least until she meets Tanner. A man that brings excitement to her life, the sort she hasn’t experienced in a long time. But there’s no way she can give Tanner a chance, not after the promise she made Daniel. Until a visit to her hometown changes her life in a way she never expected. FULL REVIEW @ HJ
OVERALL RATING:

BOOK INFO:
Publication: September 22nd, 2015 | Infinite Words |
In this entertaining and thought-provoking novel, a thirty-something woman wakes up one day to discover her long-lost love has come back to life. But is this new reality truly the answer to her heart’s desires?
Despite her great life in New York City as a prestigious book editor, Meade Peterson can’t shake the heartache of losing her high school sweetheart. Fifteen years after his death, she still thinks about all the things—love, family, happiness—she’ll never have, now that Daniel’s gone. That is, until a new man, Tanner, enters Meade’s life and brings her the kind of joy she hasn’t experienced in years. She’s torn, though, over whether she can bear giving her heart away again. Taking time to reflect, Meade returns to her hometown of Austin for what should be a relaxing visit—but instead, she becomes the victim of a violent crime.
Upon waking from her real-life Texas nightmare, Meade finds herself in another world where she doesn’t recognize anything, until she realizes the man in bed beside her isn’t a stranger—it’s Daniel. Meade has awakened into an alternate existence where Daniel is very much alive, and has been part of her life for the past fifteen years.
Meade can’t believe her good fortune—she’s finally experiencing the life she’s always wanted! Or is she? As Meade quickly learns, if one thing in your life changes, nothing else may stay the same. And now she’s forced to face the question: Is what she’s gained worth what she’s destined to lose?
at 08:22