REVIEW & GIVEAWAY: THE WRONG KIND OF COMPATIBLE by KADIE SCOTT 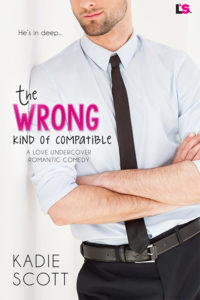 Data analyst Cassie Howard may be brilliant (and, okay, a little awkward), but she’s worked hard to get where she is. She definitely doesn’t need some sexy new analyst coming in and taking credit for her work. Or the inappropriate thoughts that keep popping out of her mouth she’d rather he not hear.

For undercover FBI agent Drew Kerrigan, computers have always made more sense than people, but he’d better develop some slick social skills in a hurry if he’s going to win over the too-tantalizing-for-his-sanity Cassie. Hacking their systems was easy. Now he’s just got to hack the one person in the company most likely to see through his ruse…

In The Wrong Kind of Compatible (Love Undercover #1) by Kadie Scott, FBI agent Drew Kerrigan faces a tough undercover assignment when he's tasked to work alongside someone who has just as impressive computer skills as he does. Too bad she's his target and the only way to get close to her is to unleash his charm on her; charm he needs to find quickly, considering he's better with computers than people. However, the closer he gets with Cassie, the harder he finds it to believe she's responsible for what's going on inside the company she works for. But when the truth comes out about his true identity and why he's working as a data analyst, will Cassie be able to forgive him or has he ruined their chance at happy ever after?

What a fun and interesting read Ms. Scott has penned in this first story of her Love Undercover series, which drew me in from the very beginning due to the heroine's reaction to her new co-worker. Seriously, she had me smiling, as she says whatever is on her mind, even if whatever is on her mind isn't supposed to spill from her mouth. Will her tendency to verbalize her every thought get her in trouble?

As for the dialogue, it was very entertaining due to the hero and heroine's witty banter. The nerdy innuendos and jokes had me chuckling, because it helps Drew overcome his social awkwardness and get closer to Cassie. Then there's the investigation into the information Drew is looking for that makes things interesting. Is Cassie innocent or guilty? Why are the FBI looking at her as a suspect? However, it was the characters back stories that I really enjoyed, as Cassie comes from this wonderful family where she's well-loved, but she doesn't feel like her parents are as proud of her as they are of her siblings. Will she finally realize the truth when things start going wrong for her?

Both the main characters were enjoyable and I loved how things turned out between them in the end. Cassie is strong and brave in the way she stands up for herself when she learns the truth about Drew. I also liked how hard-working she is, and that she doesn't let anything stand in her way of finishing a task she's been assigned. While Drew, I could sympathize with him when it came to deciding between whether Cassie was guilty or innocent. I also liked how he handled his co-workers when it came to their opinions. He would finish the assignment he was tasked with no matter what.

Overall, Ms. Scott has penned a really good read in this book where the chemistry was strong, the romance was delightful and the way this story ended had me smiling because of how everything worked out for Cassie and Drew. No way was Cassie going to go down without a fight when it came to the investigation. Furthermore, the epilogue wrapped this story up nicely, because readers discover what happened to Cassie in terms of her job and how far the hero and heroine have come in their relationship. Certainly, they've found the perfect addition for their household. I would recommend The Wrong Kind of Compatible by Kadie Scott, if you enjoy romantic comedies or books by authors Jennifer Blackwood, Nina Croft or Donna Michaels. 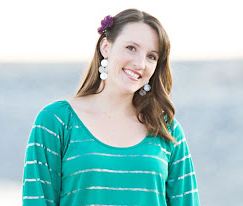 Award-winning contemporary romance author, Kadie Scott, grew up consuming books and exploring the world through her writing. She attempted to find a practical career related to her favorite pastime by earning a degree in English Rhetoric (Technical Writing). However, she swiftly discovered that writing without imagination is not nearly as fun as writing with it. No matter the genre, she loves to write witty, feisty heroines, sexy heroes who deserve them, and a cast of lovable characters to surround them (and maybe get their own stories). She currently resides in Austin, Texas, with her own personal hero, her husband, and their two children, who are growing up way too fast.

a Rafflecopter giveaway
at 21:11