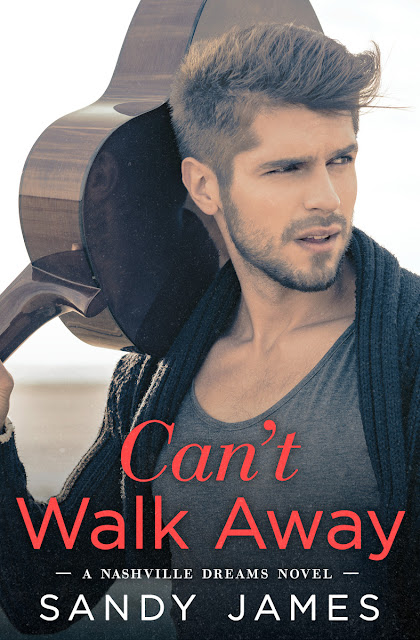 In Can't Walk Away (Nashville Dreams #1) by Sandy James, Brad 'Hitman' Maxwell was once a brilliant songwriter, but he gave it all up when he discovered his late wife's betrayal. Now he owns a successful bar and loves how pouring beers helps distract him from what happened in the past. However, the moment Savannah Wolf steps onto the stage and sings, Brad finds himself pulled back into the world he left behind, especially since Savannah inspires him to write songs again. Yet, when the past begins to rear its ugly head and Savannah finds herself a target, will Brad be able to help her fight fire with fire or will they lose everything they've worked so hard for?

What a fascinating and delightful read Ms. James has penned for this first book of her Nashville Dreams series where the main characters had me enthralled from the very beginning, because Savannah is an absolute mystery to Brad, even though he should know who she is. However, it was from the moment where the hero and heroine came face-to-face for the first time that had me enjoying the way this couple's relationship started, because it's palpable Savannah makes an excellent muse for Brad when it comes to creating music again; something he never thought he'd do again.

As for the dialogue, it was intense due to the main characters back stories, what happens to the heroine that has her making erroneous decisions, which could put her and her daughter's future in jeopardy. Will Brad be able to help her make the right decisions and fight for their future together? However, the dialogue isn't all intense. There are some light-hearted moments that had me enjoying this couple's growing relationship and the tight friendship Brad shares with secondary characters, Russ and Ethan. Furthermore, the heroine is strong, brave and I liked how determined she was to succeed when it came to her dreams for her future. I also liked how good of a mom Savannah is and that she would do anything for her daughter, even if it means making decisions that could get her in trouble. Yet, what I liked most of all about the heroine is how she gave Brad a chance, even knowing his reputation with women.

While the hero, he's confident, hard-working and I liked how determined he was to win the heroine over because she's special and unlike any woman he's ever known. I also liked how protective he was of the heroine when it came to everything she goes through from handling the media to dealing with her ex. Not that it's easy for the hero to handle the media when they make him out to be the bad guy. Is his association with the heroine doing more damage to Savannah's reputation or his? Yet, what I liked most of all about the hero was his growing bond with the heroine's daughter.

Overall, Ms. James has delivered a really good read in this book where the chemistry between this couple was intense; the romance hot; and the ending had me totally captivated because of what the heroine does to make certain her future is secure. No longer is she going to let what her ex did in the past rule her and it's about time she fights back. Her demands were fantastic. I would recommend Can't Walk Away from Sandy James, if you enjoy the opposites attract trope or books by authors Erin Nicholas, Serenity Woods, Kelly Jamieson and Ann B. Harrison.

In Nashville the stars shine a little brighter, songs sound a little sweeter, and love lasts a lifetime.

Young, rich, and better looking than a man has a right to be, successful songwriter Brad "Hitman" Maxwell was once Nashville's biggest celebrity. Then a heartbreaking loss and a shocking betrayal caused his light to go out. Now, instead of pouring his soul into song, he pours beers at Words & Music. His bar is the perfect escape--a place to forget his past--until the night she takes the stage...

Savannah Wolf used to dream of becoming Nashville's hottest star. Now, as a young single mom, she dreams of a steady income and being home to tuck her daughter into bed. So when Brad Maxwell offers her the gig of a lifetime--playing as the headliner at Words & Music--Savannah discovers the best of both worlds. And she refuses to ruin this opportunity by falling for her sexy boss. Except that Brad suddenly starts writing music again... music inspired by her.

By the fifth take, Brad was losing his patience.

Had he been wrong in thinking Savannah was something special, something new? He sure as hell didn’t think so.

Then why couldn’t he get her to sing with the passion she’d shown back at Words & Music?

Maybe it was the song. “That Smile” was his first attempt at writing in a long time. Perhaps it wasn’t up to snuff?

No. When Brad had heard Savannah sing it earlier, he’d known he’d written a strong song with a good melody and a catchy beat.

Something was clearly blocking her talent.

“I’m sorry, Brad.” She dropped the headphones from her ears to let them rest around her neck. Then, head bowed, she started shuffling through the sheet music.

He watched her closely, trying to find some telltale clue as to what was going on today that had robbed Savannah of the passion and talent he’d counted on. Her hair was braided, the braid an eclectic mixture of blond and blue. A blush tinted her cheeks, and he could hear her nervousness through the quaver in her voice, especially in the last notes of her fifth recording.

Something was definitely wrong, and he was going to have to find a way to fix it. But he couldn’t do that from another room. Even though he could see her, something told him she needed something more personal. Unsure of whether being closer to her would make a difference, he figured it was worth a shot.

Brad started a new recording so he could capture the song if he was able to help her, pushed himself away from the console, and headed to the recording booth with his remote control in his pocket. He pulled the door open and stepped inside.

Savannah glanced up from the music, offering him a wan smile that made his frustration evaporate. She knew something was wrong, too. Maybe if they put their heads together, they could get back the magic.

After pulling a stool beside hers, he sat. Then he gently took off her headphones, plucked the pages from her hands, and placed them back on the music stand. She let her eyes meet his, and he could see her concern.

He nodded and scooted closer. Then he wrapped his hand around one of hers. “You’re not going to think about recording.”

“Nope. This time you’re just going to sing to me. That’s all.”

Her whole body relaxed, and Brad had to fight the desire to smile.

She nodded, and before she could get a chance to think about what he was doing, he pulled a remote from his pocket and began the music playback so that it echoed through the room.

The notes of the intro flowed around them, and he kept her grounded by not allowing her to glance away. When she opened her mouth to sing, he gave her hand a reassuring squeeze and offered her an encouraging smile.

And sing she did. Each delightful note came from deep inside her, and he found himself caught in some kind of spell, the same type she’d woven around him back at Words & Music. He hung on each rise and fall of that delicious voice until the last note echoed through the booth.

The song might have ended, but not the magic. Brad found himself leaning closer, his eyes fixed on her soft, pink mouth. Desire ripped through him as she mimicked his action, drawing ever so slowly closer until he could feel the sweet heat of her breath against his face.

With a groan of surrender, he captured her mouth with his own, giving her no warning as his tongue swept deep inside.

Savannah nearly knocked over her stool when she rose to thread her arms around his neck. She was such a little bit of a thing that he could stay seated and draw her between his outstretched legs without interrupting the kiss. As she moved closer, Brad wrapped his arms around her waist and pulled her hard against him.

The kiss turned ravenous, and he realized that he was done fighting this attraction.

Sandy James lives in a quiet suburb of Indianapolis and is a high school psychology teacher.  She owns a small stable of harness racehorses and enjoys spending time at Hoosier Park racetrack.  She has been an Amazon #1 Bestseller multiple times and has won numerous awards including two HOLT Medallions. 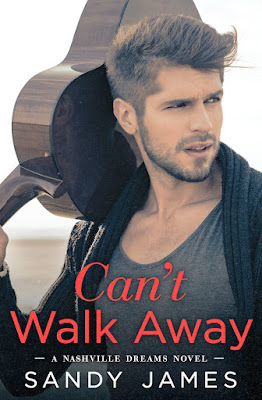