REVIEW: TO CONQUER A SCOT by TAMARA GILL 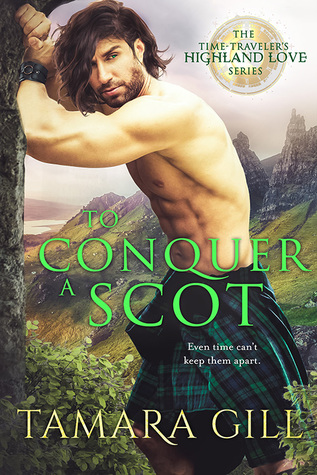 In To Conquer a Scot (Time-Traveler's Highland Love #1) by Tamara Gill, when Abigail Cross finds herself in a different period in time all due to time-traveling, she never imagined she'd meet the man of her dreams. Even if he's an insufferable man that she finds difficult to understand all because their opinions of the world differ. Still, the more time Abigail spends with Laird Aedan Macleod, the more she finds herself falling for a man from a different time to hers. Is a lifetime of happiness between them possible or are they too different to ever have a shot at happy ever after?

This book was so much fun to read, as Abigail and Aedan prove that opposites do attract. Really, and this story provides readers with plenty of chemistry between the main characters, wonderful dialogue, lots of tension and a plot that was fast-paced and compelling. Really, the way this story started had me loving the hero immediately, as the hero is protective of his sister and determined not to let her do anything stupid, which could end up exposing her magic. Will he get through to her? However, it was from the moment the hero and heroine comes face-to-face for the first time where this story really takes off, as this couple don't get off to the best of starts since Abigail is nothing at all like Aedan wants for a wife, and yet, he's intrigued by her.

As for the dialogue, it was intense due to the main characters back stories and everything this pair go through on their journey to happy ever after. Being in a different time; a time so far back in the past (1601 to be exact) is worrisome for Abigail. Will she be able to handle being in such a different time zone? Will anyone learn the truth that she's from the future? Will she ever be able to return to her time? Moreover, the heroine is resilient and courageous, as she begins to deal with the fact that she's in a different time period and may not be able to return home. I also liked how Abigail challenges the hero, especially since he's the Laird and the person that everyone is supposed to listen to when it comes to the clan. While the hero, he's gruff, obnoxious and I liked how he progresses throughout this story. Certainly, he has some big decisions to make. I also liked the close relationships he has with those he considers family as well as those of his family, especially his sister, even if she's an interfering, audacious woman that goes against his wishes at times.

Overall, Ms. Gill has delivered a really good read in this book where the chemistry was strong; the romance was wonderful, as the hero begins to realize that he'll do anything to protect Abigail and keep her safe; and the ending had me loving how strong the friendships are that Aedan has and that the hero was willing to do whatever it takes to be with the heroine no matter the consequences. Yet, it was the epilogue that wrapped this story up nicely, as Aedan and Abigail have so much to look forward to. I would recommend To Conquer a Scot by Tamara Gill, if you enjoy Historical Romance, the mysterious strangers trope, Time-Travel Romance or books by authors Heather McCollum, Callie Hutton, Vanessa Kelly and Tara Kingston.

Time-traveling isn’t what Abigail Cross had in mind for her Scottish vacation, nor was a potential marriage to the Laird Aedan Macleod. The fact that the obnoxious, yet hot, and definitely sexy Highlander sees the world very differently than she does, is beside the point.

Aedan Macleod knows what he wants in a wife, and Abigail certainly doesn’t meet his Highland standard, even though he must rein in his desire, because beautiful, opinionated Abigail would never suit as a laird’s wife.