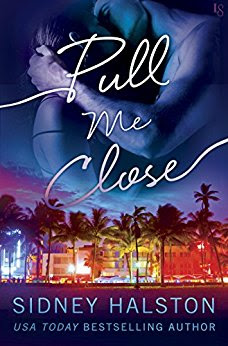 Nick Mereno doesn't have time for women, and certainly not a woman that reminds him of his ex. Yet, there's something about Katherine Wilson that draws him to her, even though his head is screaming for him to stay away from the woman that struggles with several phobias. Can he find a way to help her and prove that falling in love can be enough for her to conquer her fears?
What a powerful and emotional first book of The Panic series Ms. Halston has penned, encompassing a heroine determined not to let her fears win and a hero determined to help her. Right from the beginning, I was hooked with what happens to Katherine. She's been through so much, and yet, she's trying her best to face her fears. Unfortunately, she's not as successful as she would like to be. How is she going to convince Nick that her passing out is from an anxiety attack? Will he even give her a chance to explain?
The dialogue was intense due to the main characters back stories, especially that of the heroine. Her harrowing past has been haunting her for many years, and she knows she needs to overcome it. She can't continue the way she is. But at the same time,  how can she overcome it when everything reminds her of the worst moment of her life? Will Nick be able to help her once he learns some of her past and why certain things cause her to panic? However, the dialogue wasn't all intense. There was certainly some playful dialogue between Nick and Katherine that had me liking this pair every time they were together. Nick doesn't know whether giving Katherine a chance is worth the trouble, yet she pulls him in with her determination to conquer her fears.
As for the heroine, she was an incredible main character. Her courage to overcome her phobias has its up and downs, and I could understand why the negatives made her consider giving up on her plan to get better. Yet, I'm glad that Nick challenged and encouraged her. Honestly, he was a godsend. With the way he helped her fight to overcome various things that scare her everyday. While Nick, he has the weight of his world on his shoulders after the trouble that rocked his family. And although I didn't always agree with how he dealt with things such as his brother and pushing Katherine to step outside her comfort zone, it was totally necessary. Because his brother needed to make Nick realize that he was there to take away some of the pressure the hero was under and Katherine needed all the help she could get to face her fears. Really, he was good for the heroine.
Overall, Ms. Halston has penned a great start to this series where the sex scenes were hot and illustrated the strong chemistry Nick and Katherine had really well. Chemistry that continued to grow with every obstacle they faced until the sexual tension between the pair became too much and spilled over onto the pages in nicely-detailed romantic moments. The way this story ended totally took me by surprise with what happens to Nick, which in turn made Katherine realize that nothing could hold her back from having the hero in her life permanently. I would recommend Pull Me Close by Sidney Halston, if you enjoy a story about a heroine determined to face her fears and a hero willing to help her.
OVERALL RATING:

BLURB:
Welcome to Panic, a sultry Miami nightclub where bodies and hearts move to a beat that doesn’t stop at sunrise—the setting for an emotionally charged series from the bestselling author of the Worth the Fight novels.

When Katherine Wilson passes out in the arms of the hottest man she’s ever seen, it’s not because of the lights, the pulsating music, or the crowded dance floor. It’s because she can’t enjoy a night out like a normal person, not with her debilitating anxieties. These panic attacks are going to destroy her life unless she takes control—or gets a helping hand. So after the club’s bad-boy owner personally escorts her home, Katherine feels something urgent and primal awaken inside of her.


Nick Moreno doesn’t need a headache like Katherine. A drug bust has put his father behind bars and forced Nick to take over the daily business of his family’s South Beach nightclub. His head tells him to walk away—but his body has other ideas. Katherine’s vulnerability, her grace and courage, compel him to reach out. And when they kiss, Nick is overcome by desire: to pull her close, and promise that his embrace will always be the safest place on earth.

“Do one thing that scares you every day,” I say to myself as I walk to the elevator.
I keep thinking that if I can get in that stupid elevator, I can go to my sister’s wedding. Because nothing can be worse than being in a tiny steel box held up by a cable. If it malfunctions, either I’ll plummet to my demise or I’ll be stuck inside, helpless and in the dark.
For weeks now I’ve walked over to it every day, pressed the button, and then run back to my apartment when it dings open, like it’s a monster coming to get me. I know that I’m working myself up. I know what reality is, and I understand the extremely low statistical likelihood that any of the things I envision will actually happen. I’m not completely insane. But I also can’t help the fear that bubbles up inside me and distorts my logic.
Today, however, I woke up with a new sense of bravery and determination and I’m going to take advantage of it.
I know that the cable is made of steel and it will not break.
I know that the elevator is in working order.
I know that it takes only 22.9 seconds from the time it closes on the fifth floor to the time it opens in the lobby.
Still, I’m nervous. Less so then previous days, though.
I dial Nico because even with everything that I know, I need someone with me.
“My sweet Katherine,” he says over the music in the background.
“I need you.”
I notice the change in him, even over the phone. “Wait, what? I’ll be right there.”
The fact that he is so quick to rush to my rescue is heartwarming, but I don’t need him physically here, so I clarify quickly. “No, no, no. Stay there. That’s not what I meant. I need you to stay on the line with me.”
“Okay. Hold on a second—I need quiet. I can barely hear you.” I hear the music become quieter and quieter. “All right. What’s going on?”
“If I say the safe word and tell you to call the police or firemen or whatever, just do it, no questions asked, okay?”
“What?” He sounds alarmed. “What the hell is going on, Katherine?”
“I’m getting on the elevator and I’m going to the lobby. If it gets stuck, I need you to call for help.”
“For fuck’s sake, Katherine, you scared the hell out of me.” He lets out a breath. “Okay, I’ll wait on the phone. Or do you want to wait for me to come over? I can be there in ten minutes and do this with you,” he says while I press the button.
“No. I need to do this alone. Also, what good would it do me if you’re stuck in there with me?”
“It’s not going to get stuck,” he says with a chuckle, and I can practically hear him rolling his eyes on the other end of the line.
“So how’s the club tonight?”
“I heard the ding, baby. Stop procrastinating and get inside.”
I look at the open door. The elevator car looks so ominous, and now I don’t know if I can do it.
“Get that cute little ass in the elevator.”
“Never mind—I changed my mind.”
“No. You’ve never called me for this before. You’re obviously feeling good about it. I’m proud of you for doing this.”
As the door starts to close I press the button again, and the closing doors reopen.
“So get inside. You can do this.”
“Nico, I don’t—”
“Yes, you can. Don’t finish that sentence. You’ve done more in the last few weeks than you’ve done in a long time. You can absolutely do this. I know you can. Don’t you want to be free?”
I do. Damn it, I do. I take a step and then another one. My feet feel heavy and my heart is beating a mile a minute. I can hear that he’s breathless too.
“Corazón, just roll with it. Get inside,” he says softly. 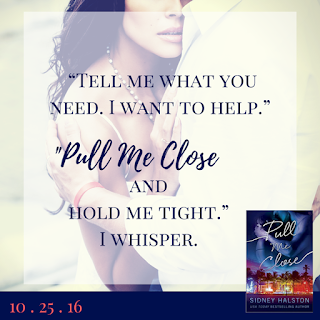 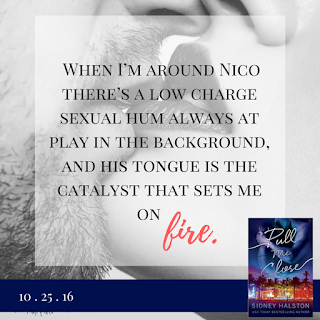 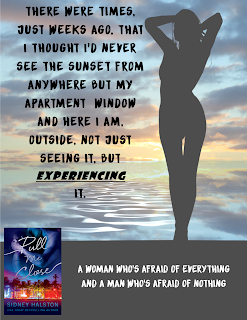 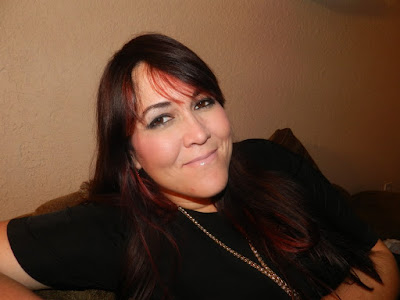