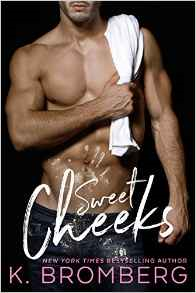 In Sweet Cheeks by K. Bromberg, Saylor Rodgers can't believe her ex-boyfriend is sending her an invitation to his wedding; a wedding that would have been theirs, if they hadn't broken up. With the choice of whether she'll go or not taken out of her hands by accident, Saylor knows there's only one way she'll be able to get through the event and that's by accepting her high school sweetheart's offer of going with her. The only thing is he's a famous actor and if there's someone with a camera around and a shot to be taken, he'll be front and center. But when the spotlight is shined on her and not in a positive way, can Saylor handle the attention or will she run from her second chance with Hayes Whitley?

This book was recommended to me by a couple of book blogs I follow, and I've got to say that I'm absolutely glad I took the chance on reading it, because it was incredible. Saylor receiving her ex's wedding invitation and whether she'll accept or decline the invite sets the fast-pace of this story, and makes this book a real page turner, as I wondered how she was going to handle the choices she makes. Will she give Hayes another chance, even though he's more than likely to leave again once the wedding is over? How will she handle all the horrible things people are saying about her because she left her ex? How far will she go to make certain her bakery starts prospering instead of her needing to close the doors on her dream?

The dialogue was well-written and the perfect combination of intense and playful. The intense due to the main characters back stories, especially that of the hero because of what's happening between him and one of his former co-stars. Then there's the history between Saylor and Hayes that doesn't make it easy for the heroine to give him another chance after how he left ten years ago. However, there were so many light-hearted moments that had me laughing or smiling. Such as the moments when he expects her to call him 'Captain', the things one does with a Grudge Cupcake, and the twitter feed where Hayes does everything to win Saylor back after their fallout (sometimes pick-up lines can be so bad that it's no wonder a woman can't help but laugh at the guy saying them.)

Both the main characters were fantastic, and I was hooked by the history between them. Saylor's brother, Ryder, is Hayes's best friend, so that's an obstacle in itself, because Ryder is protective of Saylor and doesn't want to see her hurt again. Yet, at the same time, it seems he couldn't care less about his sister and best friend being together because they're good for each other (well that's my opinion anyway because Ryder just wants Saylor to be happy, and clearly Hayes made her happy ten years ago and now). Then there's Saylor's assistant, Dee Dee, who I thought was great with her fan-girling moments of Hayes when she first meets him and her questions for Saylor on how she knows the actor. Then there's all she does to help Saylor when it comes to Hayes. She wants her friend to be happy after everything Saylor's been through since breaking up with her ex. With her bakery not doing so well and the fact that her and her ex's mutual friends have deserted her.

Saylor has so many great qualities that made her a wonderful heroine. She's strong and brave by going with Hayes to her ex's wedding to finally see if she did the right thing by breaking things off between them. She's also independent, hard-working and I liked how she dealt with things that upset her. Then again, her career can be quite therapeutic and good for when relationships go sour. While Hayes, he's confident, cocky, and I liked how willing he was to help Saylor. She desperately needs someone to help distract her from the trash talk circulating about her and the harsh looks aimed her way at the wedding. Good thing Hayes knows what to do and isn't afraid to use his celebrity status to do it. Until being a celebrity becomes more of a hindrance than help when it comes to achieving Saylor's goal of saving her bakery and showing people that she's more than what they think of her.

Overall, Ms. Bromberg weaved a spell on me with this book, hypnotizing me from start to finish with its hot, steamy romance; compelling characters - both the main and secondary; a storyline that provided some tough obstacles for Saylor and Hayes to overcome and entertaining dialogue. The way this story ended was perfect, as Hayes proved to Saylor how much he loved her and that he'd never stopped in the ten years they were apart, no matter how hard he tried. Furthermore, the epilogue wrapped this story up nicely with the surprise Hayes had for Saylor. It was very romantic. I would highly recommend Sweet Cheeks by K. Bromberg, especially if you enjoy the brother's best friend trope or second chance romances.

BLURB:
It all started with the invitation. To my ex-fiance’s new wedding.

I should have ignored it. Thrown it away. Set it afire. But I didn’t. I replied.

With a plus one.

And then my assistant accidentally mailed it.

Enter Hayes Whitley. Mega-movie star. The man who has captured the hearts of millions. But I gave him mine years ago. He was my first love. He was my everything. Right until he up and left to chase his dreams without so much as a simple goodbye.

And now we’re left wondering if the pieces of the life we once shared still fit together somehow. First loves are hard to forget. The question is, do we want to forget? Or do we risk the chance and see what happens next?
BUY LINK:  Amazon
at 23:00