In Jen Gilroy’s Back Home at Firefly Lake, Cat McGuire and Luc Simard find love and second chances in a heartwarming small-town romance that fans of Women’s Fiction and Susan Wiggs’ The Lakeshore Chronicles will love! 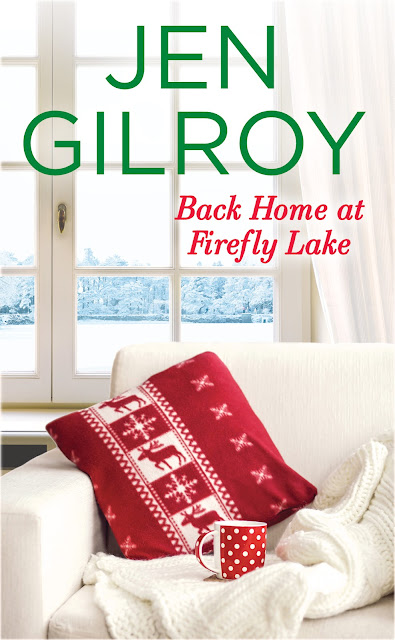 In Back Home at Firefly Lake (Firefly Lake #3) by Jen Gilroy, after losing his wife and his career, Luc Simard has returned to Firefly Lake to pick up the pieces of his life and hopefully begin to heal. Determined to give back to the community, he's coaching the local kids' hockey team, which is something that brings him joy, but he never imagined he'd find love again. However, spending time with Cat McGuire and her daughter is bringing happiness back into his life. Will he be able to convince Cat to give him a chance, or will they lose their shot at happy ever after because they're both afraid?

The first two books of this series are extremely enjoyable reads, but this book is the most captivating of Ms. Gilroy's Firefly Lake series yet. Really, it had absolutely riveting main characters that find love when they least expect it; compelling dialogue that had me loving the growing relationship between the hero and heroine as well as the interactions between the main and secondary characters; and a fast-paced plot that kept me entertained from start to finish due to everything this couple go through to be together including needing to keep the heroine's daughter happy, so the young girl knows she's loved and not being pushed aside because her mom may be ready to get back into the dating game.

The way this story started had me liking the heroine immediately, as she's a great mom that would do anything for her daughter, because moving her to Firefly Lake was necessary and she wants her daughter to be as happy as possible, which means registering her to play the sport she loves the most. However, it was from the moment the hero and heroine come face-to-face for the first time that had me loving how this couple's relationship grows from friendship to love.

As for the heroine, she's a great single mom and I could understand why she fears getting involved with another man after what happened with her child's father that makes her wary to trust men, even though Luc is the most genuine person ever and wouldn't do anything to hurt her. I also liked how strong and brave she is by everything she's done to make a good life for her and daughter. Will she be able to make things even better for her daughter's future with all the effort she's going to with her job? Yet, what I liked most of all is the decisions the heroine makes for her daughter and herself when it comes to her job and doing what's right for her daughter, even if it means letting others handle her daughter when the young girl gets a little out of control.

While the hero, he's held a ton of guilt since the death of his wife, which is totally understandable because he wasn't there for her when she needed him. Yet, I liked that he's determined to do what's right for Cat and her daughter, even if it means facing the town's gossip and not allowing it to interfere too much that it tears them apart. Will Luc be able to convince Cat that he likes that the townspeople know they're a couple? Yet, what I liked most of all was the hero's determination to help the heroine's daughter, because she's talented at the sport that the hero lived and was so successful at for years.

Overall, Ms. Gilroy has delivered another fantastic and worthwhile read in this book where the chemistry between this couple was heady and convincing; the romance shows how good these two are together and that they shouldn't let anything stand in their way of their happy ever after because the heroine needs Luc just as much as he needs her to finally move on from the hurts of their pasts; and the ending had me worried for this couple's happy ever after, but in the end, left me completely satisfied by the hero's determination to win back the heroine, even if it means using any means necessary to get her to listen to what he has to say. However, it was the epilogue that wrapped this story up nicely, because no one is more deserving of happiness than these two, especially after the surprise the heroine had for the hero that could have broken their relationship for good. I would recommend Back Home at Firefly Lake by Jen Gilroy, if you enjoy small town romances, the friends to lovers trope, or books by authors Sarah Morgan, Jill Shalvis, Lori Wilde and Rachel Gibson.

She has a million reasons to leave. Can he give her the one she needs to stay?

Cat McGuire's return to Firefly Lake is turning into much more than she bargained for. Sure, she missed the crisp pine-scented air and the comfort of having her family around her. But being home makes her feel less like the successful single mom she is--and more like the awkward teen who never fit in. It doesn't help that hockey-pro Luc Simard is back in town, too. Luc was her childhood crush, the hometown hero who never noticed her, and yet somehow he still makes her heart skip a beat.
Luc's homecoming has been bittersweet. He's lost his wife and his career, but there's no better place to start over than Firefly Lake. Coaching the local kids' hockey team makes him feel alive again, and he thinks his life is complete--until Cat arrives. The shy girl he always wanted to protect is now the gorgeous woman who's stealing his heart and making him believe in second chances. But how can he convince Cat that Firefly Lake is where she truly belongs?

Praise for Back Home at Firefly Lake:

Luc’s heart squeezed. Cat was embarrassed to ask her family for help, like he’d have been embarrassed asking his. Except, that would never be an issue because he had more money than he could spend in one lifetime. Money to finance the creamery expansion his dad had talked about for years, and to send his folks on that cruise they’d hankered after but could never afford because of the cost of raising four kids and putting most of them through college. Money for everything except what mattered most—taking care of his wife and their child like he’d planned.


“Pay for the hockey registration when your grant comes through.” He tried to smile. “I know you’re good for it.”

“Thanks.” Cat’s voice cracked and she took one hand away from her bag to rub it across her face. “Hockey means everything to Amy. I want her to be able to play, but she’s growing so fast right now.”

“Hockey’s an expensive sport.” He slid an arm around her shoulders and gave her a little squeeze. The same kind of friendly squeeze he’d given her all those times back in high school when she’d saved his butt in chemistry. Before today, however, his fingers had never tingled when he’d touched Cat. His body had never heated, either.

Cat started and pulled away at the same instant he did. “Hockey can be a dangerous sport too, and now Amy will be playing with boys. She hasn’t played with boys since she was seven. She could get hurt.

Like he had, hurt so bad it had ended his career. “Amy’s playing minor hockey. At her age, there is a rule about no body checking.” He tried to make his tone reassuring. “I promise I’ll keep a close eye on her.” It was his job as her coach, and he’d do the same for any kid. It had nothing to do with the strange and unexpected attraction he all of a sudden had for this woman he’d known his whole life, who he’d never really looked at until today.

A woman who wasn’t Maggie. Luc’s stomach clenched in a tangled lump of guilt and grief, tied tight with a slippery ribbon of disloyalty. Maggie was never coming back, but that didn’t mean Luc could forget her. Or that he wanted to.

Other Books in the Firefly Lake Series: 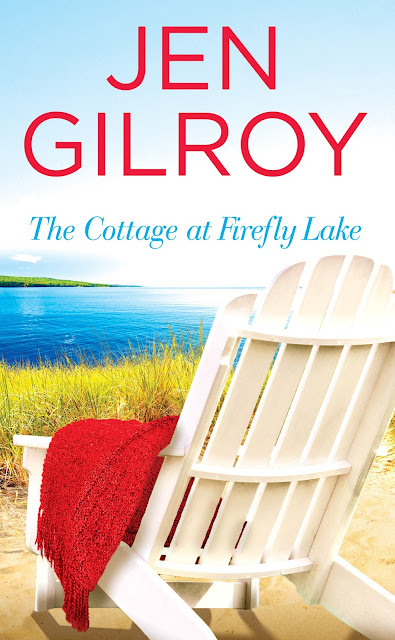 Charlotte Gibbs wants nothing more than to put the past behind her, once and for all. Yet now that she's back at Firefly Lake to sell her mother's cottage, the overwhelming flood of memories reminds her of what she's been missing. Sun-drenched days. Late-night kisses that still shake her to the core. The gentle breeze off the lake, the scent of pine in the air, and the promise of Sean's touch on her skin…True, she got her dream job traveling the world. But at what cost?

Sean Carmichael still doesn't know why Charlie disappeared that summer, but after eighteen years, a divorce, and a teenage son he loves more than anything in the world, he's still not over her. All this time and her body still fits against his like a glove. She walked away once when he needed her the most. How can he convince her to stay now?

Add to your “Want to Read” shelf:  Goodreads

Praise for The Cottage at Firefly Lake:

“Gilroy’s debut contemporary is packed with potent emotions…[the] protagonists tug at the heartstrings from the beginning of the story and don’t let go. Long on charm, this story invites readers to come in and stay a while.” – Publishers Weekly 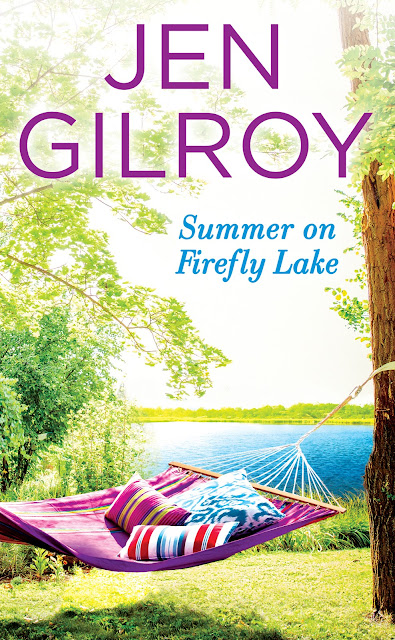 Sometimes love is better the second time around.

Mia Gibbs spent her marriage putting her husband’s needs before her own. And now, after a painful divorce, she’s building a new life for herself and her two daughters back home at Firefly Lake. The last thing she needs is a man to complicate things. But former bad boy turned friend Nick McGuire—and the one kiss they’ve shared—has turned everything upside down.

Attorney Nick McGuire wasn’t meant to be a family man. His career has always been his focus, and after taking time out to help his mother, he’s ready to get back to the city…until Mia and her daughters arrive at Firefly Lake. Mia is beautiful and intriguing, and it doesn’t take long to realize being “just friends” will never be enough. As the summer nights turn colder, Nick will have to choose between the life he’s always wanted…and the woman he can’t live without.

Add to your “Want to Read” shelf:  Goodreads

Praise for SUMMER ON FIREFLY LAKE

“Has charm to spare… The delightful supporting cast and expertly plotted story add depth and richness to this tale, leaving readers eager for another visit to Firefly Lake.”—Publishers Weekly 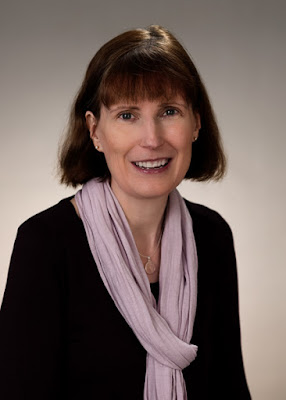 Jen Gilroy lives in a small town in eastern Ontario, Canada where her Irish ancestors settled in the nineteenth century. She's worked in higher education and international marketing but, after spending too much time in airports and away from her family, traded the 9-5 to write romantic women’s fiction to bring readers' hearts home.

Jen likes ice cream, diners, vintage style and all things country. Her husband is her real-life romance hero, and her teen daughter teaches her to cherish the blessings in the everyday.

The Cottage at Firefly Lake, the first book in her Firefly Lake series, was a finalist for Romance Writers of America’s Golden Heart® award in 2015. It was also shortlisted for the Romantic Novelists’ Association Joan Hessayon Award 2017.