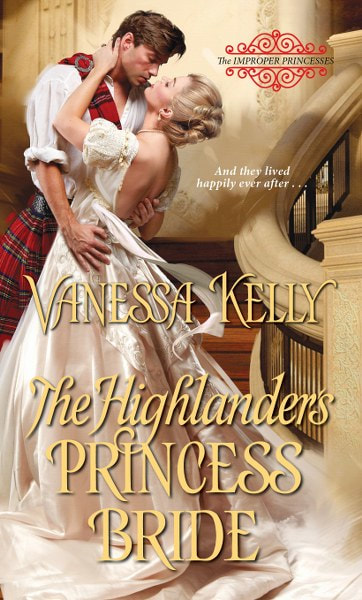 In The Highlander's Princess Bride (Improper Princesses #3) by Vanessa Kelly, The Earl of Arnprior, Nicholas Kendrick,  finds it hard to keep his brothers in line, so hiring governess Victoria Knight is perfect. But making one of her duties be to help his brothers be marriage material is asking a bit too much. However, the more time Nicholas spends with Victoria, the more he finds he wants her in his life. Yet, with the secret Victoria is hiding, will she and Nicholas get their chance at happy ever after; or will they lose their chance at happiness because Victoria's past catches up with her?

This series just keeps getting better and better, and this third book of Ms. Kelly's Improper Princesses series is a highly entertaining read filled with some amusing moments because of the hero's family; intense and compelling dialogue due to the main characters back stories, especially that of the heroine because of what she's running from; and an incredible array of characters that had me hoping for more of Nicholas's family when I finished reading this story. The way this story started had me sympathizing with the heroine, as she needs her friends and family after what she's been through and she's lucky they help her the way they do. Yet, it was from the moment the hero and heroine met that had me reading quickly, determined to discover whether the hero could win Victoria over since his family don't make a very good first impression when they meet.

Both the main characters are enthralling and I loved how the heroine handles everything the hero's family puts her through from the way they treat her in the beginning to what Nicholas's brothers do that has her needing to help him sort of the trouble they've found themselves in. Talk about going rogue and causing more problems for Nicholas to have to solve. No wonder he needs Victoria to help transform his unmarriageable brothers into respectable men that will hopefully each find a woman to settle down with. Will Victoria be up to the task? Will she be able to tame Nicholas's brothers, so they can find love and happiness?

Furthermore, the heroine is resilient, courageous and I liked how determined she was to help Nicholas's youngest brother and help Nicholas to reconcile with another of his brothers that let the hero down years ago and caused Nicholas so much grief. I also liked the growing bond she shared with Kade, Nicholas's youngest brother, as Kade needs Victoria just as much as she needs him. Yet, what I liked most of all about the heroine was her determination to protect the hero and his family from her past. No way would she allow anyone to suffer for what she did. While the hero, he's had a lot of loss and I could understand why he felt the need to outrun his grief when it all happened. Yet, in saying that, I liked that he's finally realized how much his family needs him and is determined to do whatever it takes including hiring Victoria to help him with his unruly brothers and grandfather. Luckily, the heroine is good for the Kendrick household.

Overall, Ms. Kelly has delivered an exceptional must read in this book where the chemistry between this couple was powerful; the romance wonderful and had me liking the playfulness of the hero when it came to their romance; and the ending had me cheering for this couple's happy ever after, especially after what the heroine goes through. However, it was the epilogue that wrapped this story up nicely, as forgiveness is important and love and happiness are some of the best things in one's life. I would recommend The Highlander's Princess Bride by Vanessa Kelly, if you enjoys second chance romances, the opposites attract trope, or books by authors Christi Caldwell, Darcy Burke, Jess Michaels and Shana Galen.

In Vanessa Kelly’s enchanting series, three young women descended from royalty overcome their scandalous beginnings to win the hearts of the ton’s most eligible men . . .

The illegitimate daughter of the Prince Regent might be expected to pursue various dubious professions. Actress, perhaps, or artist’s model. Even courtesan. Victoria Knight, however, has become a governess—a respectable choice, until she travels to Scotland to meet her new charges. The younger brothers of Nicholas Kendrick, Earl of Arnprior, aren’t children at all. They’re brawny, wild Highland men. As for the Earl, he’s handsome, guarded, and far too compelling . . . especially for a woman hiding a dark secret.

Nick needs a proper teacher to transform his unmarriageable brothers—and a sensible, straight-laced wife for himself. Miss Knight seems to fit the bill on both counts. But he soon discovers there is more to Victoria than he thought. It’s not just her notorious origins, or the danger that’s followed her all the way to Scotland. It’s the fiery loyalty beneath that sedate façade. This, the real Victoria, is the woman Nick is starting to desire so desperately. And what an earl wants, he’ll use every seductive means to get . . .

**Easily read as a standalone!**

“What I wish you to do is remind my brothers what those standards are. They were raised as gentlemen, but certain events have caused them to forget themselves. A refresher course is required.”

“And what would such a course entail?” She cast a disapproving glance at his brothers. “Beyond the obvious.”

Nick shrugged. “The usual one—how to engage in polite conversation with young ladies, how to conduct oneself appropriately at a dinner party, how to dance—”

“They already know how to dance,” barked Angus.

“Just reels, Grandda,” Grant said. “Oh, and the sword dance. But I don’t think many girls know that one.”

Alec choked, trying not to laugh. When Nick shot him a glare, his friend simply gave him a bland smile.

“And it would be fun to learn how to waltz,” Graeme said, suggestively waggling his eyebrows at Miss Knight.

“Ye wish to be caperin’ about like dandies?” Angus growled.

Miss Knight seemed to shake herself free of some sort of mental paralysis. “I am not a dancing teacher, my lord. I’m an educator.”

“For God’s sake, Arnprior,” Alec said. “Why don’t you simply hire a dancing master? Surely he could help the lads with those other”—he waved a vague hand—“social things.”

“I tried that. It didn’t work.” The horrific experiment of a few months ago remained vivid in his memory. The dancing master had barely survived the week.

“Let me see if I understand you correctly, my lord,” Miss Knight said. “You wish me to tutor your youngest brother. As well, I am to train your older brothers to be accomplished, well-mannered gentlemen for the purpose of putting them out on the marriage mart. And I am to do that without the help of other instructors who specialize in such matters.”

Nick met her irate gaze with an approving smile. “That sums it up nicely, I think.”

“Would you also like me to teach them fencing and boxing?” she asked sarcastically.

“Oh, we already know how to do those,” Grant piped up.

“Good God,” Royal said, shaking his head. “This is a complete joke.”

“I am forced to agree with your brother, Lord Arnprior,” Miss Knight said. “This must surely be a joke.”

ALSO IN THE IMPROPER PRINCESSES SERIES! 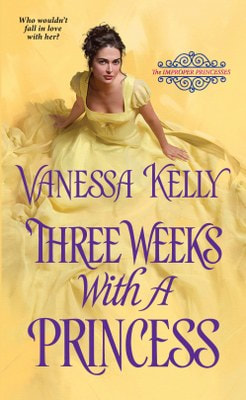 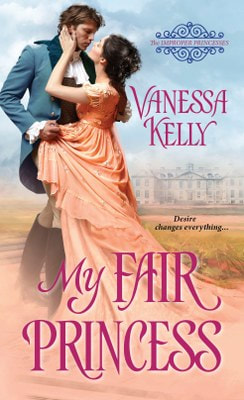 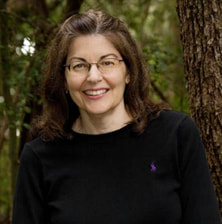 Vanessa Kelly is the award-winning and USA Today bestselling author of The Improper Princesses series, The Renegade Royals Series and The Stanton Family series, in addition to other historical romances. Named by Booklist as one of the “New Stars of Historical Romance,” she is a Maggie Medallion winner and is well known for developing vibrant Regency settings, appealing characters, and witty storylines that captivate readers.