REVIEW: CINDERELLA AND THE GEEK by CHRISTINA PHILLIPS 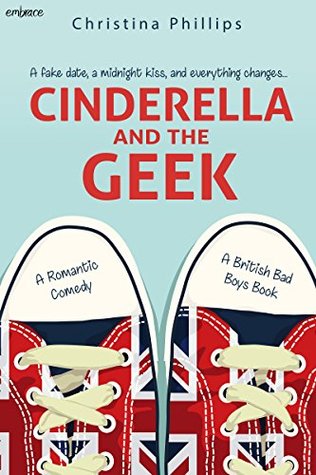 From Christina Phillips a sexy, new romance with a hero you won’t forget…
I'm not looking for love or a Happily-Ever-After because I know how that ends. I just need to concentrate on my degree and look after myself. But there's something about my boss, Harry, I can't resist. It's crazy since he's so hot and smart it should be illegal.
And then, just like Cinderella, I have my night at the ball and a midnight kiss, and for a week all my sexy daydreams come true. That fake date changes my life in a way I could never imagine. It turns out, Harry wants me too.
But I’m off to pursue my dreams, and he’s taking his business to the next level. There’s no way this fairy-tale has a happy ending, but that doesn’t keep me from wishing for it.
Buy Link:  Amazon

In Cinderella and the Geek (British Bad Boys #1) by Christina Phillips, Alice has had a thing for a boss for a while now, but she's never acted on it. However, with her leaving the company soon, she's determined to finally go after what she wants. Yet, just when things are starting to heat up and change between them, she finds Harry allowing old wounds to interfere in their relationship. Will Alice be able to convince him that he's the one she wants, or will they both walk away from their shot at happy ever after?

Stories encompassing a heroine that feels like Cinderella and a hero that gives her a magical night I've found are always good reads, and Ms. Phillips really surprised me with this story. Certainly, it was very engaging, fun, and I loved this couple together. The way this story started sets the fast-pace of this story, as the heroine has a plan for her last weeks of work before she leaves, and finding out more about the plan and whether the heroine would go through with it had me reading this story quickly since I was determined to discover what she would do. Would Alice chicken out on her plan?

Both the main characters were compelling and I loved these two together, as they explore the wonderful chemistry between them and see whether they can make their relationship work. Will Alice and Harry continue their relationship once she leaves? However, in saying that, both have issues that make them wary of relationships since Harry has always felt like second best to his twin brother and I could understand why he feels threatened because of what his last girlfriend did. While Alice, she's not willing to give up her dreams for anyone. Not after how things turned out for her mother and what her mother sacrificed for her father.

Furthermore, the heroine was resilient, courageous and I liked how she interacted not only with Harry but with the secondary characters. They all seem to love her, except one woman that feels threatened by her friendship with the two men she works for and I liked what Harry did to make sure that woman knew how important Alice was to them personally and to their business. Alice is the glue that keeps everything going. I also liked how Alice handled herself when it came to interacting in Harry's world, especially the night they go on their first date. How was she not more jealous? While the hero, he's a good guy that deserves happiness and I'm glad that he finally went for it with Alice because they're so good together. I also liked the close relationship the hero had with his sister and that she wasn't afraid to say whatever was on her mind, especially when it came to his relationship with Alice. Really, how could he be so clueless at times and yet so brilliant at others?

Overall, Ms. Phillips has delivered a really good read in this book where I absolutely loved this couple together since they have plenty of chemistry and the ending had me loving Harry's determination to win back Alice. How could he have not trusted her? She's nothing like his ex. I would recommend Cinderella and the Geek by Christina Phillips, if you enjoy the friends to lovers trope, boss-employee romances, Cinderella-type stories, or books by authors Cindi Madsen, Robin Bielman, Magan Vernon and Avery Flynn.