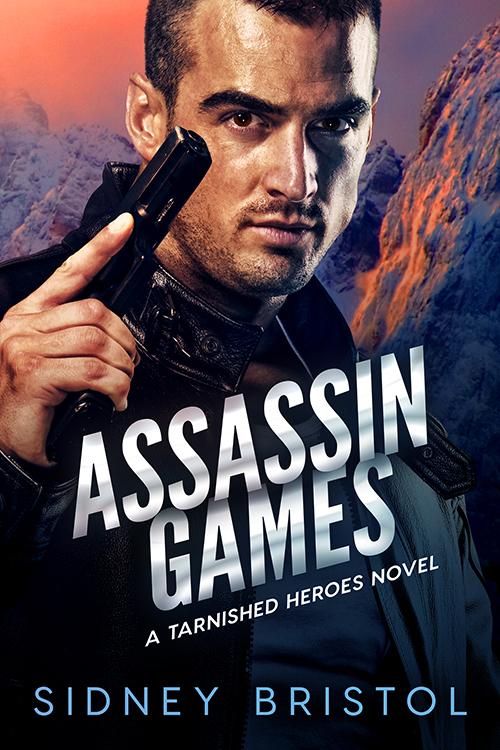 Anderson Gratney does odd jobs that usually involve a gun and covert ops for the CIA. His latest assignment? Kidnap a CIA analyst in order to keep her safe. Easy. Except there’s nothing simple about the beautiful, careful Carol Sark, who tempts him the more he learns about her.

Coming face to face with a masked man in her home is the most terrifying experience of Carol’s life—until he kidnaps her. He claims he’s there to keep her safe, but she doesn’t know who to trust. And until they can figure out who the threat is, she's forced to take him at his word.

Time is ticking, and even though she drives him nuts, Anderson very much wants to keep her alive. Unfortunately, the assassins have other ideas…

In Assassin Games (Tarnished Heroes #2) by Sidney Bristol, Carol Sark never imagined finding herself on the run from the CIA, but when Anderson Gratney kidnaps her that's exactly what happens. Forced to work together for the greater good, Carol finds herself doing the one thing she shouldn't -- falling for a man all wrong for her. Yet, when things being to get more and more dangerous, Carol becomes determined to do anything to come out on top, even if it means putting her life on the line. Will Anderson be able to keep Carol safe, so they have a shot at happy ever after or will going separate ways be the best thing possible?

What an absolutely riveting, fast-paced, action-packed read Ms. Bristol has delivered in this second book of her Tarnished Heroes series where the main characters were incredible and had me loving the journey they take to happy ever after; and the dialogue was compelling and kept me on the edge-of-my-seat due to the suspense and action-packed moments these two deal with, as they go on the run to find answers. Will Carol and Anderson be able to discover what is going on inside the CIA and take whoever is responsible for what is going on?

With the dialogue, it was well-written and intense due to the main characters back stories and the obstacles these two face on their journey to happy ever after. Will Anderson and Carol be able to stay a step ahead of the bad guys? Moreover, the heroine is resilient, courageous and I loved her determination and willingness to do whatever it takes to get to the bottom of what's going on with the CIA and who is determined to see her dead. I also liked how the heroine challenged the hero because it's palpable Anderson needs to open up about his past if he's to have any chance of healing and overcoming it to have a future with someone. Will Anderson's past be a bone-of-contention between them?While the hero, he's confident in his skills; a good guy, despite what he does to Carol in the beginning; and I liked how determined he was to keep Carol safe.

Overall, Ms. Bristol has delivered another fantastic read for this series where the chemistry between this couple was intense; the romance nicely-detailed and hot and had cheering for this couple's happy ever after; and the ending had me worried for the main characters because of what they're facing, but had me loving the way things work out for this couple. Really, Anderson and Carol are so good together, especially since she challenges him to want to be a better man. However, it was the epilogue that has me looking forward to more of this series because it sets up a very interesting and exciting direction for the series tot take. Will things ever get back to the way they were?  I would recommend Assassin Games by Sidney Bristol, if yon enjoy romantic suspense or books by authors Tee O'Fallon, Tony Burrows, Jenna Ryan and Anita Devito.

Andy lunged into the shed and yanked the line on the detonator caps. Sparks hissed as the charges caught. He didn’t have time to ensure the countdown started. He jumped onto the snowmobile and gunned the engine, swerving the high-powered vehicle around.

They needed as many objects between them and the shooters as possible.

A figure leaned over the railing.

Andy squeezed the accelerator and they shot forward. He swerved. Shots rang out, hitting the snow, sending up plumes of flurries.

He cut behind the house.

Glass shattered and a shot hit the plastic casing on the front of the snowmobile.

Andy banked, turning so fast he felt Carol nearly whip off the side.

A blast so loud the snow seemed to ripple from the concussion wave rang out. Andy lurched forward and Carol’s yell was lost amid the sound of the explosion.

They tumbled sideways off the snowmobile.

The timing was off.

Debris hit the snow, raining down.

Andy rolled, pinning Carol under him, protecting her with his body. She sobbed into the material of his jacket.

“Carol.” He barked her name, killing all kindness inside of him. It was natural to panic. Any normal person would, but they didn’t have that luxury. “Pull it together. We have to go.”

He pushed up, grabbing hold of her arm and hauling her up with him. He couldn’t coddle her, couldn’t spend precious moments assuring her it would be okay. They needed to get clear, in case there were satellites aimed at them or if the two shooters weren’t dead. Chances were, if these people were good enough to find them, they were good enough to survive the traps.

Andy glanced back. The front right side of the house was blown out and flames licked the sky. With any luck, everything they’d brought with them would burn with the follow-up charges.

“Come on. Now.” He didn’t see movement from the two shooters, but he also didn’t see any bodies.
Unless he saw them dead, he’d assume they were alive.

He wanted to go back, finish the job, but that would mean leaving Carol vulnerable. He couldn’t do that.

Andy picked her up and carried her to the snowmobile. He righted it, put her on the back, and climbed on. He’d hoped they would have more time here, but they didn’t.

He gunned the engine and they shot forward, sailing through the trees.

Andy headed south until he spied a landmark, an almost perfectly smooth, sphere-shaped boulder. He pulled the snowmobile into the shelter created by the huge rock resting against the side of the mountain, and killed the engine.

“I need you to go through your pockets. Take everything out, understand?”

Andy edged out, almost into the open, closed his eyes and listened.

Carol sniffled and wrestled with her coat, all the layers of fluffy down.

Was anyone following them?

It can never be said that NYT & USA Today Bestselling author Sidney Bristol has had a ‘normal’ life. She is a recovering roller derby queen, former missionary, tattoo addict and board game enthusiast. She grew up in a motor-home on the US highways (with an occasional jaunt into Canada and Mexico), traveling the rodeo circuit with her parents. Sidney has lived abroad in both Russia and Thailand, working with children and teenagers. She now lives in Texas where she spends her time writing, reading, hunting Pokemon, playing board games and catering to her furry overlords, aka the cats.