Today we are celebrating the release of a standalone title by Carrie Aarons. FORGIVEN is available for purchase now, and it is the second book in the Nash Brothers series! For a limited time, you can get the first book in the series, FLEETING, for 99 cents! You can follow Carrie for exclusive updates about the series. 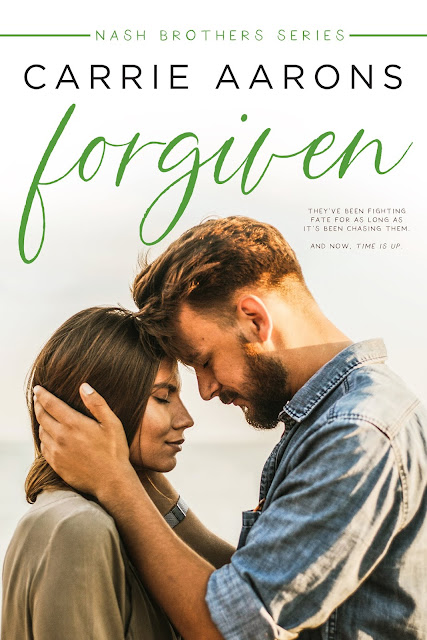 In a split-second, a car crash killed almost everything between them. Ten years later, can one accidental ride fix tattered spirits, uncertain futures, and broken hearts?Lily Grantham has always done what she’s been told. The daughter of a senator, she grew up as the good girl of Fawn Hill, and carried that torch right on through to adulthood. Her only wild streak? Bowen Nash. She loved that boy since the day they laid eyes on each other, and it nearly ended them both. A decade later, and Lily still can’t move on. Even if Bowen has made it clear he doesn’t love her anymore.Bowen Nash never wanted the life he’s trapped in. Destined for baseball fame and the love of his high-school sweetheart, that existence vanished in the flip of an old pickup. Now, he’s stuck in the town that produced his worst nightmare. Pretending to hate Lily Grantham guts him day in and day out. But to protect her from the ultimate secret, it’s necessary to break his own heart each time they pass on the street.
They’ve been fighting fate for as long as it’s been chasing them. And now, time is up.

In Forgiven (Nash Brothers #2) by Carrie Aarons, ten years ago a terrible accident tore Bowen Nash and Lily Grantham's relationship apart. Living in the same town has been torture for both, especially when Lily doesn't understand why their relationship went wrong in the first place. Now, ten years later, Lily is still finding it hard to move on since Bowen is the only man she'll ever love. Will she fight for a relationship with Bowen or will the secret Bowen has kept from her for so long tear them apart for good?

What an emotionally-charged, fast-paced, wonderfully-engaging read Ms. Aarons has delivered in this second book of her Nash Brothers series, which can easily be read as a stand-alone; and encompasses a wonderful array of characters in both the main and secondary, compelling dialogue that made me smile and cry, and tough obstacles for these two to overcome because of Bowen's secret. Will the heroine finally learn the truth? How will Lily react if she learns the truth?

With the main characters, I really felt for Lily because she's been the dutiful daughter for so long and it's hard not for her to fall in line. Yet, I liked that she finally began to realize that things needed to change, if she's to finally move on from Bowen or for the pair to find their way back to each other. Furthermore, the heroine is strong and brave because of everything she's been through and everything that's thrown her way throughout this story that makes her fight for what she wants. While the hero, I couldn't help but sympathize with him because of his secret and the fact that he's been caught between a rock and a hard place for ten years. His need to protect Lily is honorable, which I love about him because he doesn't want Lily hurt by those that are supposed to protect her. Yet, I found he could be a real jerk sometimes in order to make Lily keep her distance, no matter how necessary the things he says are needed to stop him from getting close to the woman he's always loved -- and still loves -- again.

Overall, Ms. Aarons has delivered a really good read in this book that has made me want to go read the first book of this series; and where the chemistry between this couple was strong; the romance was heart-warming, as these two find their way back to each other and overcome the tough obstacles they face to be together; and the ending had me so happy because of the choices Lily makes to fight for her future with Bowen because they're meant to be and shouldn't let anything keep them apart any longer. However, it was the epilogue that wrapped this story up nicely, as these two are so happy together and deserve every bit of happiness they've found this time around. I would recommend Forgiven by Carrie Aarons, if you enjoy second chance romances, the enemy to lovers trope or books by authors Staci Lynn, Pippa Grant, Piper Rayne and Elle Kennedy. What Reviewers Are Saying about the Nash Brothers...
“So what do I need to do to find a quaint little town like Fawn Hill? And some Nash brothers? Because good golly Miss Molly I am in love with everything here!” -The Book Branch

PURCHASE THE PREVIOUS BOOK IN THE SERIES Read it for FREE in Kindle Unlimited

When she isn't writing, Carrie is busy binging reality TV, having a love/hate relationship with cardio, and trying not to burn dinner. She lives in the suburbs of New Jersey with her husband, daughter and dog.