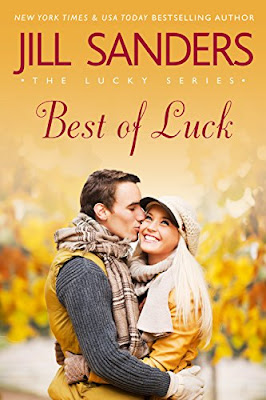 In Best of Luck (Lucky #3) by Jill Sanders, stung by the rejection of the only man she's ever loved, Amber decided to follow her dreams of becoming a Hollywood star. Now she's a household name, hounded by paparazzi and headed home for the first time in two years to film her next movie. Confronting the past isn't easy, especially when she has a stalker, but if there's one thing Amber comes to realize while she's home, is that there's more to life than her career. Can she finally land the man of her dreams?

Thomas 'Tom' Albert Jr. has fought his feelings for Amber for far too long, but finds it even harder to do so now that she's returned home and more beautiful than ever. But with her being his best friend's sister, there's no way he can make a move on her. However, it's impossible to avoid Amber, and when things start to heat up between them, Tom finds himself in for the fight of his life. Not only to win Amber's heart, but also to keep her safe from a stalker.

The brother's best friend trope is one of the best -- I think -- and Ms. Sanders has penned a fantastic read in this third story of her Lucky series. The prologue sets the fast-pace of this story, and hooked me immediately with the relationship between Amber and Tom. There's serious chemistry between them, yet it's understandable why the hero does what he does. She needs time to achieve her dreams. No way can he hold her back, no matter how much he wants her.

As for the dialogue, it was intense due to this couple's complicated past relationship, and although this is a contemporary romance, there's a dash of suspense to it, due to Amber's stalker. Who is Amber's stalker? Is it someone she knows? Why are they stalking her? Amber is strong, brave and I loved how determined she was to make Tom realize they're meant to be together. Indeed, she doesn't make it easy for the hero to be able to resist her with her persistence. Also, she's done well for herself in chasing her dreams, which is proven by how successful she is. It seems she can't go anywhere without paparazzi stalking her or fans wanting to get the star experience.

While Tom, he's hard-working and focused in what he did for his family's company. He's managed to turn things around, and his measure of success is proven by what he's been doing with Albert's Furniture. However, it was the hero's emotions and reactions that hooked me to his point-of-view. How could he think Amber would ever betray him? She's one of the most open and honest people with him, except for not revealing the secret she's keeping until a time when it's absolutely necessary. But what I liked most about the hero is what he allowed the heroine's brother to do to him, because it proved how much he loved Amber to the secondary characters.

Overall, this was a really good book where the strong romance between the two main characters showed how right they are for each other, and that theirs is a happily ever after that was meant to be, no matter how long it took the pair to find their way back to each other. The way this story ended totally took me by surprise when I finally discovered the person stalking Amber, but the way Tom was there for Amber had me smiling, as to did the decision the heroine made about her career and the meaning behind a certain piece of Tom grandmother's jewelry. I would recommend Best of Luck by Jill Sanders, if you enjoy the second chance romance or brother's best friend tropes.

BLURB:
Amber has only ever wanted one thing in life. To be a star. When that dream has finally come true, an old friend ends up getting in the way and friendships may end up jeopardizing everything. Now in a time when privacy is a thing of her past, where paparazzi follow her every move, she’ll need to decide what’s more important to her, because it’s more than just her career on the line.

Tom has struggled for years with his feelings towards Amber, his best friend’s little sister. The woman has been driving him crazy since… well, forever. Now that she’s on every TV set, every movie poster in the country, it’s even harder to avoid looking into those sexy blue eyes and not remembering her passion. Especially when she’ll be spending the next few months back in Denver filming her latest movie. This time, Tom may not be able to hold back the sparks that fly between them.
BUY LINK:  Amazon
at 14:38