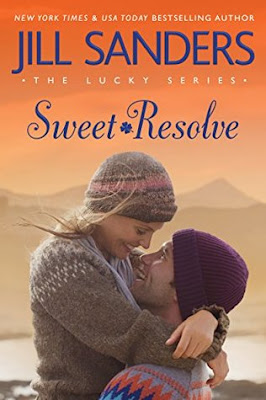 In Sweet Resolve (The Lucky Series #2) by Jill Sanders, Amy Walker is determined to make partner at the real estate firm where she works, but it seems she's not the only one in with a chance at receiving something she's worked so hard for. Even worse her competition is her junior high tormentor, Logan Miller. Will Amy get her promotion, or will she end up discovering there's more to life than work?
The enemies to lovers trope is one I've read more and more of lately, and I've got to say that the ones I have read recently have not disappointed me. The prologue starts off this story really well and introduced me -- as a reader -- to the struggles Amy faced at the hands of Logan when they were in junior high. Why is he such a complete jerk? Is there something wrong with her that makes him choose her to torment? However, it was chapter one where this story had me completely hooked due this couple's growing relationship, which starts off full of animosity from Amy's point of view. There's something about Logan that gets under her skin. Can she forgive him for the past? Or will she finally get her revenge?
As for the main characters, I loved both Amy and Logan, but it wasn't only the main characters that made this story a worthwhile read. Indeed, the secondary characters made this story captivating too, especially Amy's best friend with her suggestions on how to get back at the hero for everything he did in the past to make her life miserable. Furthermore, Amy is strong and brave in the way she finally confronts the past, and the difficult decisions she has to make when it came to Logan. Should she let bygones be bygones, or give the hero a little payback to make herself feel better because of what Logan does to her when they first come face-to-face in fourteen years. Moreover, she's also successful, smart and worked hard to get to where she is in her life. She definitely deserves the promotion, and it doesn't seem fair that Logan has a bit of an advantage over her. Yet, in saying that, it's good that she has some competition.
While Logan, he's worked hard for all that he's done in his career, and proves to Amy that he's changed. That he's not the same boy that teased her in the past. Indeed, he's trying to make up for all that he did. There were reasons why he teased her and they weren't to make her feel bad about herself. It just seemed he came off as a jerk when he didn't mean to. Moreover, I liked how these two really challenged each other both personally and professionally, especially because any teasing banter between the pair upped the sexual tension between them and illustrated that second chances are worth fighting for.
Overall, Ms. Sanders has penned a wonderful read in this second book of her Lucky series where the romance did justice to this couple's intense chemistry. The way this story ended took me by surprise with what happens to Logan, and Logan's mom made me laugh a little by embarrassing him, but it was who got the partnership that I was really intrigued to discover. Was it Amy or Logan? Or did the hero's uncle end up going with a totally different option? In the end, I found I was smiling due to the decision made. I would recommend Sweet Resolve by Jill Sanders, if you enjoy the enemies to lovers trope or if you enjoy books by authors such as Marina Adair, Catherine Bybee or Samantha Chase.

BLURB:
Amy Walker is steps away from her perfect job. The day she makes partner at her real estate firm will be the happiest of her life, second only to the day in junior high when her tormentor, Logan Miller, finally moved away.
But fate has a warped sense of humor, because Logan is back. In her town, in her office, gunning for the same promotion. Worse, the man is sinfully hot. But that won’t keep Amy from exacting the revenge he richly deserves…
Logan had reasons for acting wild in his youth, but he still regrets the way he treated Amy. Especially once he’s sharing an office with the smart, self-controlled beauty. For one thing, she’s got a wicked sense of payback. For another, he’s realized there’s something he wants much more than a promotion. And that’s to melt the ice he helped form around her heart all those years ago and to prove that loving thine enemy can be the ultimate happy ending.
BUY LINK: Amazon