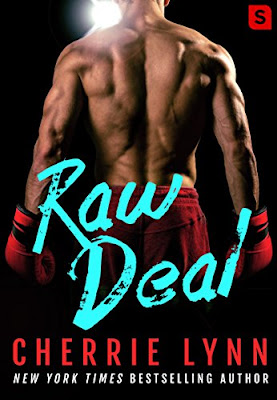 In Raw Deal (Larson Brothers #1) by Cherrie Lynn, the death of her brother during a mixed martial arts fight has left a gaping hole in the hearts of the Dugas family. Savannah has done her best to stay strong for her parents and her brother’s wife, but there’s only so much she can keep inside before she finally breaks. That is until she meets Mike Larson, the man her brother was fighting in the cage. Somehow, he’s a balm to her grief, even when she knows it’s wrong to be around him. Can they help each other heal, or will her family’s disapproval keep them apart?
I have loved each and every one of this author’s books that I’ve read (which is all of them), but this story took Ms. Lynn’s writing to another level for me. From start to finish, this book was extremely entertaining, fast-paced and a story that took me completely by surprise. Due to it encompassing the forbidden romance trope with the heroine falling in love with the man responsible for her brother's death. Can Savannah forgive Mike? Can they help each other heal from the death of her brother? Since Savannah misses her brother so much, while Mike feels such guilt over being the opponent in the cage when her brother died.
As for the dialogue, it was intense and emotional due to the main characters back stories, the truth about the heroine's brother’s death and the fact that this story encompasses the forbidden romance trope. It’s hard for Savannah to give Mike a chance when she knows her family will be against her even talking to him let alone doing more. Yet, he’s hard to resist, especially when he’s so guilt-ridden and needing to do what he can for a family that have lost someone they loved, which he does -- at least -- for Savannah and the man’s grieving widow. However, there were some really good light-hearted moments between the main characters that made me smile, especially when Savannah told Mike about the worst thing she’s ever done in her life and why she did it; or when he was trying to find all her tattoos and what it meant to her if he discovered them all; or the moment when the heroine was proving how good she is with her hands because of her career as a massage therapist.
Those moments certainly upped the sexual tension between the hero and heroine, as did every emotion they felt while fighting their attraction. Because both knew their growing relationship couldn’t last and that there were people who were going to be hurt, if they knew they were sneaking around together. Luckily though, until the critical moment in the story when things go south between them, their strong chemistry spilled over onto the pages in passionate sex scenes that proved how much these two need each other to heal from her brother’s death.
Mike was a compelling hero and won me over from the moment he was introduced. His life growing up wasn’t easy and he did things no teenage boy should have to do to keep himself and his family safe. Things that have made him the man he is, and are partially reason why he became an MMA fighter. So, he could work off his pent-up emotions due to all of the challenges he’s faced throughout his life. While Savannah, she’s always felt like she came second to her brother with their parents, and having Mike to talk to about the loss of her brother and what each of them have been doing to cope helps her heal little by little and absolves Mike of some of his guilt. Indeed, she’s a strong heroine that has some tough decisions to make when it comes to her relationship with the hero. Can she convince the hero to give up his career? Will she go against her family, if it means finding happiness with Mike? Will she be able to accept Mike, if he returns to fighting in the cage when the sport already took away someone she loved?
Overall, this first book in Ms. Lynn’s Larson Brothers series was a fantastic read that left me wanting more of the hero’s HOT brothers. The way this story ended was perfect, as Savannah needed a sign to make her realize that Mike is a good man who would do anything to stay safe and come home to her after every fight, if she could overcome her fear that she might lose him. And what a sign she received, which was a blessing from the one person that she needed a sign from, to convince her that giving Mike a chance was the best thing for her to do. She deserved to be happy, even at the expense of her family’s disapproval. I would recommend Raw Deal by Cherrie Lynn, if you enjoy the forbidden romance trope or a story containing a mixed martial arts hero searching for forgiveness.
OVERALL RATING:

BLURB:
Savannah's brother was killed in a cage fight with Mike "Red Reaper" Larson after a savage punch to the head.
When Mike shows up at the funeral, he’s nothing like Savannah expected. Gone is the fierce, brutal beast she’s seen in the cage. In his place is a beautiful man torn with guilt, seeking forgiveness, and willing to do anything to ease her pain.
Her family doesn’t approve, but her heart doesn’t stand a chance. Irresistibly drawn together, neither of them can deny the intoxicating desire unleashed between them, turning their pain into the most exquisite pleasure.

But every time Mike steps into the cage, Savannah knows she could lose him too. She can’t go through that again, but how can she let go of the one man who sets her body and soul on fire?
BUY LINKS:  Amazon