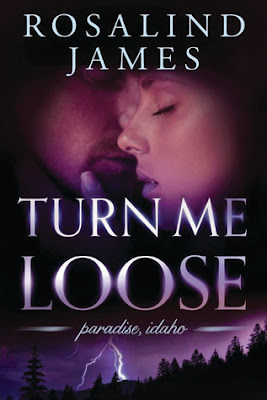 In Turn Me Loose (Paradise, Idaho #3) by Rosalind James, Rochelle Marks doesn't want her little sister to make the same or worst mistakes than she did in her past, so she's cleaned up her act and is determined to show everyone she's not the same girl who they believe uses her pin-up girl image to get what she wants. However, when Travis Cochran enters her life again, she realizes nothing will ever be the same. The chemistry that sparked between them the only night they spent together is still there, and there's no way she can keep things casual, if she gives him a chance. Will Rochelle and Travis have a shot at happy ever after, or will her past cause trouble for her?

This is the first book I've read by Ms. James, and even though it can be read as a stand-alone, I kind of wished after finishing that I'd read the previous books first. However, in saying that, Ms. James has penned a really good read in this third book of her Paradise, Idaho series, which encompasses the second chance romance trope and blends together contemporary romance and romantic suspense superbly. The way this story started had me intrigued with what Rochelle and her sister are going through. Why were the two women in trouble? Who are the bad guys talking about?

As for the dialogue, it was intense due to the main characters back stories and the suspense side of this story concerning the murder a young woman. Who is responsible? Why did they kill her? However, in saying that, there were some really good moments between Travis and Rochelle that had me enjoying any chance they conversed. She doesn't know whether to give him another chance, and I liked that the hero was willing to fight with words and actions to get what he wanted. He shows Rochelle that she doesn't have to be bitter towards relationships, and that just because her marriage didn't turn out like she hoped, it doesn't mean that all men are like her ex.

I really liked both the main characters. They thoroughly entertained me from start to finish with their back stories, their growing relationship and all that they go through on their journey to happy ever after. Rochelle has achieved so much by learning from the mistakes she made in her past. She's hard-working, kind, caring, and I liked how determined she was to prove to everyone that she's more than just her looks. That she's smart and committed to all that she does, whether it's to her work or family. Moreover, I liked how determined she was to make sure her sister didn't repeat her mistakes, even going so far as to put her own life in danger to get her sister out of a harrowing situation. While Travis, he's confident, smart, and I liked how he didn't give up on Rochelle, no matter how determined she was to push him away. Because she's the one woman he's never been able to get out of his mind, even though they only spent one-night together.

Overall, Ms. James has penned a wonderful read in this book where the chemistry between these two illustrated that they are good together. The way this story ended had me on the edge-of-my-seat with its suspense. Would the main characters come out on top against the bad guys? Would one of the main characters sacrifice themselves to make sure the bad guys don't hurt anyone else? However, in saying that, I was glad the way everything worked out and it made me happy that Rochelle and Travis could joke about what they faced to achieve their happy ever after. But what I loved most was the final chapter, because Travis's words and actions revealed how much he loved Rochelle and that when you find the right person, you never let them go. I would recommend Turn Me Loose by Rosalind James, if you enjoy the second chance romance trope.

BLURB:
Rochelle Marks is working hard to build a name for herself that has nothing to do with her pinup-girl curves. She’s made mistakes in the past, and now she’s trying to stop her little sister, Stacy, from making worse ones. Rochelle’s done with being nothing more than someone’s good time. Even if that someone is the one-night stand who turned her life upside down before vanishing—and who’s just arrived in Paradise, Idaho, looking to pick up where they left off.
Tech mogul Travis Cochran’s hard-won new priorities have brought him to town as a university lecturer, but he’s come for something else, too: the smart, sassy, gorgeous woman who’s been in his head for months. When Stacy’s choices draw her big sister into a web of down-home crime and cold-blooded murder, Travis’s mission gets a whole lot more urgent. Now convincing Rochelle to trust him isn’t just about winning her back. It may be the only way to keep her alive…
BUY LINK: Amazon
at 14:25