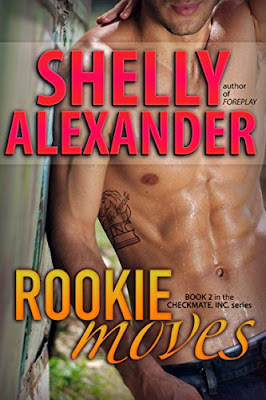 In Rookie Moves (Checkmate Inc #2) by Shelly Alexander, Dex Moore has achieved a lot in his life, most of all founding a successful company with his two friends. But the one thing he doesn't have is the one woman he wants more than anything. However, when that woman is Ava, his best friend's sister, how are things possibly supposed to work out for the best between them? Especially when he knows his best friend would not be happy if he learns the truth of the secret Dex has been hiding.
There are so many words to describe how good of a story Ms. Alexander has penned in this book, encompassing the brother's best friend trope, a hero determined to fight his feelings for the one woman he wants and a heroine determined to go after what she wants -- Dex. The way this story started with the prologue gives readers a wonderful introduction into the hero's life, and as this story is only told from his point-of-view, it made me intrigued to want to learn more about him. However, it was the moment that the hero and his best friend's sister come face-to-face for the first time in this story that I found things got very interesting. There is so much chemistry between Dex and the heroine that it's inevitable they're going to succumb to it, no matter how hard the hero tries to deny the attraction.

The dialogue was intense due to the main characters back stories and the challenges these two face on their journey to happy ever after. The heroine is keeping secrets from her brother, so what's one more. Then there's the hero and the dilemma he faces. Does he choose the woman he wants over his best friend? What will happen if he chooses the former and his chance at happiness only to have it blow up in his face? However, the dialogue wasn't all intense. There was also a bit of dirty talk from the hero that upped the heat level of this story, and moments where I felt sorry for the heroine because of the hero's reputation when it comes to women.

As for the heroine, she's strong, brave and I liked how she finally faced her past at her school reunion. No one should be treated the way she is treated, and I'm glad that she had Dex by her side. He makes things so much easier for her to deal with when it comes to the mean attitudes of old classmates. However, what I liked most about the heroine is how determined she is to get Dex to see her as more than just the sister of his best friend, because he could help make her no longer a 'rookie' in things she wanted to experience, since she hasn't experienced things in her life that she wishes to.

While Dex, he's confident and would do anything for Ava, even knowing that by putting himself in a certain situation, that he could find himself in trouble with her. I could understand his conflict when it comes to having to choose Ava over his brother or vice versa, because Ava's brother has done so much for him. Yet, how could he deny himself a chance at love, family, happiness. The kind of bond he's never had with his own parents.

Overall, Ms. Alexander has penned a really good read in this book, encompassing a dirty talking hero and a heroine that isn't afraid of his domineering side in the bedroom, because he's giving her moments she's never experienced before. The way this story ended had me shaking my head at the hero. Why did he have to be so mean to Ava? Being with her is the best thing that's ever happened to him. However, I liked that he was willing to go face-to-face with anyone that stood in his way of being with her and that he accepted the good advice of his close friends. I would recommend Rookie Moves by Shelly Alexander, if you enjoy the brothers best friend trope, the friends to lovers trope, the forbidden romance trope or a dirty talking hero that enjoys showing the woman he loves just how good they are together.

BLURB:
"Rookie? She'll be an expert when I'm done teaching her." --Dex Moore

Smart guys make the best lovers. We're curious and want to learn as much as possible, especially when it comes to women. Women are the most fascinating and complicated species on the planet, right? So when we meet a lady that piques our interest, it drives our curiosity to soaring heights. We want to study her. Figure her out.

Lucky SOB that I am, I've built a career on this very thing. As a founding partner of Checkmate Inc., a company that's grown into a multimillion-dollar business, I'm a quasi-celebrity. It's a role I never expected, and I've somehow been labeled the jet-setting playboy out of all three Checkmate partners.

I don't mind the smokescreen. I can't commit to a serious relationship while I trot around the globe to oversee our expansion, a venture that could bankrupt Checkmate if I don't keep my eye on the prize. Besides, the only woman I'd like to study, figure out, and unlock her ear-splitting cry of ecstasy is the one woman I can't have. And since she's one of my closest friends and my business partner's sister, a jet-setting playboy image is the perfect facade to hide my true feelings.

Bestselling author Shelly Alexander brings you this fresh new series of super sexy, sizzling hot heroes. It's a fun, flirty, and dirty series of romantic comedies that can be read as STANDALONE novels.

If you like smart, gorgeous, dirty talking guys who love bold and bright women, then this is the series for you! If you prefer your romances sweeter with a touch of steam, try Shelly Alexander's Red River Series.
BUY LINK:  Amazon
﻿
at 23:42