BLOG TOUR - REVIEW: THE EARL IN MY BED by STACY REID 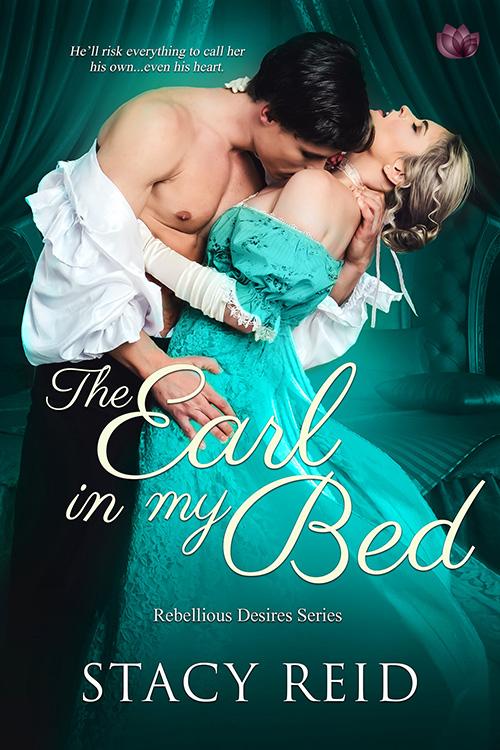 For years, Daphne Wentworth, Countess Carrington has loved her powerful, enigmatic husband, despite the fact that they married under less than ideal circumstances. But no more. Finally at her breaking point, Daphne intends to create a scandal so big, her austere husband will have no choice but to divorce her. Except everything goes awry when he surprises her with the last thing she expected.

Sylvester Wentworth, Earl of Carrington, has returned to London for one reason—to seduce his wife. After a near-death experience, he is in need of an heir and means to make his marriage a real one. To his shock, though, his wicked, beautiful countess wants the exact opposite, and he must now do everything possible to entice his countess to stay forever.

In The Earl in my Bed (Rebellious Desires #2) by Stacy Reid, after being ignored by her husband for the past six years, Daphne Wentworth, the Countess of Carrington has finally had enough. No longer will she take his indifference and will ask for what she wants - a divorce. However, Sylvester Wentworth, the Earl of Carrington isn't about to let her go easily and will stop at nothing to get what he wants -- an heir. Will Daphne and Sylvester be able to come to an agreement to get what they both want or will they fight for their future together?

Ms. Reid has become one of my go-to authors for Historical Romance and this second book of her Rebellious Desires series was an enchanting and extremely entertaining tale, of which I loved how it started because the heroine is lucky that the hero is in the right place at the right time. However, I couldn't help but sympathize with the hero because he would do anything for family and I could understand why treats the heroine the way he does due to how they end up married. Will the hero realize how wrong he is about the heroine before it's too late?

As for the dialogue, it was intense due to the main characters back stories and everything they go through on their journey to happy ever after including whether the hero would be able to protect the heroine when it comes to the trouble they face and whether the heroine will give the hero a chance after everything he's put her through. How could he think she had anything to do with her father's scheming? Moreover, the heroine is resilient, courageous, feisty when backed into a corner and I liked how determined she was to protect the hero, especially with her family continuing to try to get something over him. Will Sylvester be able to protect his family this time around? Yet, what I liked most of all about the heroine was her willingness to give the hero a second chance, even though she was hurt badly by his indifference to their marriage.

While the hero, he's been through so much in his past and I could understand why he's determined to make things right with the heroine. He's persistent in his pursuit and isn't above seducing her if necessary. He's also confident, resilient, brave in standing up to his enemies and I liked how determined he was to win the heroine over. Will they be able to forgive each other for things that have happened in the past to be together or will the past continue to get in the way of their future happiness? Yet, what I liked most of all about the hero was how protective he was of the heroine and his family. No way will he allow anyone to hurt any of them.

Overall, Ms. Reid has delivered another fantastic and captivating read in this book where the chemistry between this couple was powerful and driven by the fact that they see each other as the enemy; the romance was splendid and had me loving this couple together; and the ending had me cheering for this couple's happy ever after. Will Sylvester get to the heroine before she does something she'll regret? I would recommend The Earl in my Bed by Stacy Reid, if you enjoy Historical Romances, second chance romances, the enemy to lovers trope, or books by authors Maddison Michaels, Jess Michaels, Kimberly Bell and Darcy Burke.

It was unbearably tempting to press her mouth to his. If she allowed the intimacy of a kiss, wasn’t that the doorway to her undoing? She was already so very aware of him. That echoing emptiness crept from the corners of her heart and darted through her. Daphne knew the press of his lips, the scent of him, the comfort of touch, the thrill of passion would suppress the chasm.

She should be doing everything in her heart to resist whatever this was, for if she allowed him close enough, he would soon be in her bed, and that way led to disaster, she knew it with a certainty that defied logic. Her lips paused a whisper below his, and the fingers on her hips tensed. A rush of fierce anticipation flowed through her veins, yet the dratted man did not press his advantage at her evident willingness. Instead, he waited, an odd sort of tension riding the air.

He kissed her. She made a soft sound and parted her lips. He tasted of mint, spice, and Sylvester himself. His tongue lightly skimmed along her lower lip, and she softened more against him. Then it was over.

Her lids fluttered open, and she stared at him in bemusement.

She suddenly knew with a shattering certainty that their marriage as it had existed in that cold, indifferent state was over. What stood on the other side of the invitation, pain or happiness, she did not know, but she was willing for the next several weeks to discover it.

Stacy is an avid reader of novels with a deep passion for writing. She especially loves romance and adores writing about people falling in love. Stacy lives a lot in the worlds she creates and actively speaks to her characters (out loud). She has a warrior way, never give up on her dreams. When Stacy is not writing, she spends a copious amount of time drooling over Rick Grimes from Walking Dead, watching Japanese anime and playing video games with her love.
Connect: Site | Facebook | Twitter | Goodreads