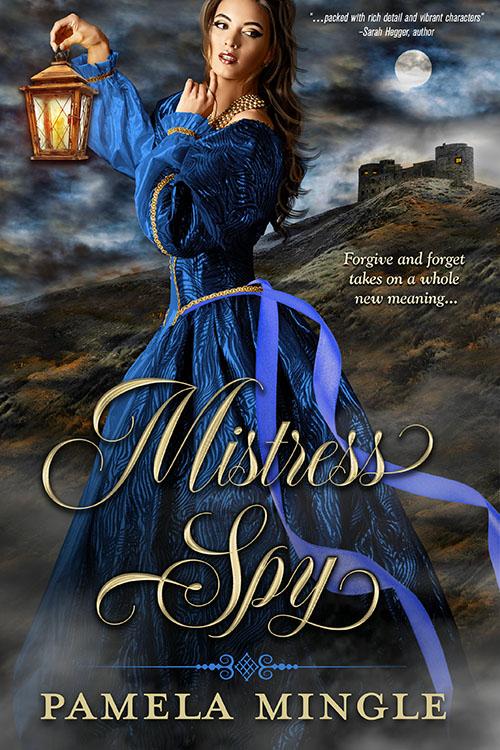 A determined sister . . . Madeleine Vernon’s dreams should be filled with elegant gowns and marriageable men. Instead, she dreams of avenging her brother’s death. But when she’s captured by the queen’s men, she’s forced to become a spy by her mysterious yet undeniably attractive captor.

A rakish spy . . . After years of working for his father in Queen Elizabeth’s service, Nicholas Ryder is close to going his own way. But now he’s got a feisty beauty he must protect or risk her execution as a traitor to the crown. She’s a distraction he can’t afford, but he also can’t stop thinking about her.

A dangerous lie . . . It is Nicholas’s job to foil plots against Elizabeth, and he sends Maddy into a household of suspected traitors to garner what information she can. As the line between captor and prisoner blurs, deceit, betrayal, and desire become a perilous mix. Ultimately, Nicholas must decide whether duty to the queen is more important than winning Maddy’s heart.

In Mistress Spy by Pamela Mingle, all Madeleine Vernon wants is revenge. Instead, she finds herself being forced to work for the Queen as a spy when she's caught by the Queen's men. Luckily, she has Nicholas Ryder on her side, otherwise things could be a lot worse for her in that she could have just as easily been executed for her crimes. Will Madeleine be able to get the information Nicholas needs her to get or will she find herself in too deep?

This is the second book I've read by this author and I've got to say that Ms. Mingle absolutely impressed me with this historical romance, as it has a good dose of suspense towards the end; compelling dialogue that had me loving the growing relationship between the main characters and the journey these two take on their way to happy ever after; and incredible main characters that have interesting back stories.

The way this story started drew me in immediately and had me worried for the heroine, as things don't look good for her, especially since it seems she doesn't really have much of a choice but to accept the hero's terms to be a spy. Will she be able to get the intel he needs? How much danger will the heroine be in? Moreover, the heroine is resilient, courageous, driven and I liked how determined she is to carry out the assignment that she's been given, even though she knows nothing about being a spy. I also liked that she didn't give up until she could get all the information she needed to stop whatever was going to happen. Yet, I couldn't help but sympathize with her because of things that she learns along the way that make her feel as though the hero has betrayed her. Will Nicholas be able to get Madeleine to listen to reason as to why he keeps certain things to himself? Things that she needs to know.

While the hero, he's confident, driven, compassionate when it comes to the heroine's situation and I liked the relationship between him and his nephew, as the little boy has been through so much and needs Nicholas every bit as much as the hero needs the little boy. I also liked the decisions the hero makes when it comes to his life and how it isn't easy to do what he does for the Queen anymore. How can he deal with everything the Queen's men do when some of the men are so ruthless? Yet, what I liked most of all about the hero was how he helps the heroine to deal with being a spy.

Overall, Ms. Mingle has delivered an enthralling read in this book where the chemistry between this couple was powerful; the romance was delightful and had me loving that the heroine gave Nicholas a chance; and the ending took  me by surprise because of the things the hero was hiding from Madeleine and had me worried for the main characters because of what happens, but had me loving that they find their way back to each other because they're meant to be together. I would recommend Mistress Spy by Pamela Mingle, if you enjoy Historical romance, the enemy to lovers trope or books by authors Anna Campbell, Stacy Reid, Mary Jo Putney and Jess Michaels.

Maddy was musing on the purpose of this meeting when she heard muted hoof beats on the water-soaked ground. Stepping out to greet horse and rider, she was welcomed by a nicker from Raven, Ryder’s mount.

Ryder swiftly dismounted. “Next time be certain who you are greeting before you show yourself,” he said rather sternly.

“Had I not been expecting you, I would have.” He grasped her elbow, leading her back inside. Three walls were intact and helped block the wind. Maddy lowered the hood on her mantle and waited for him to speak.

His expression was grim. “I wished you to have this information at once. I have learned Thomas Vine’s true identity.”

Her heart jumped. “Oh?” she said, attempting to gather her wits. Maddy had remained undecided about exactly how much to confess when the time was right. If Ryder already knew Musgrave’s identity, conceivably he knew all.

He did not notice her unease, but went on speaking. “His name is John Musgrave. He’s a notorious border reiver, a brutal criminal and most likely a killer. I am considering removing you from Lanercost for your safety.”

And return me to Carlisle Castle? “Oh, pray do not! This is my only chance to save myself.” And to redeem herself. What would happen to her if Ryder carried out this plan? If his father had any say in the matter, which he most assuredly would, she would soon be sleeping on straw again. “Nicholas, I beg you!” Before thinking the better of it, Maddy grabbed hold of his doublet and yanked.

Ryder said nothing, only kept a probing gaze on her. How had she dared to lay her hands on him? Reaching out, he captured them with his own, his sage green eyes searching her face. “Do you still fear I could not protect you? I would keep you from harm, Maddy. You have become very important to me.”

And then he bent his head and kissed her. A gentle, exploring kiss. With a soft moan, she leaned into him. His arms came around her, gathering her close, kissing her more urgently. The tantalizing pressure of his tongue seeking hers made Maddy forget everything but the here and now. Nicholas smelled as clean and fresh as morning dew. The soft rustle of Raven’s grazing, the wind soughing, the rain drip-dropping off the wall, yes, she was aware of all those sounds. But nothing mattered except the warmth of his embrace and the sensual press of his lips. A fever possessed her, and when he stepped away, she wanted to lure him back. He tasted like twilight: deep, sensual, and a little mysterious.

They laughed, both of them breathless. He continued to hold her arms. “I would very much like to kiss you the night through, but I must tell you the rest.”

She nodded. “Go ahead.” Maddy hoped she could comprehend it; her senses were still attuned to other things.

All seriousness now, he said, “Musgrave is an outlaw, drafted into service by Cecil as a double agent. In the past year, he was hauled before the Council of the North because of his raiding. He got off with a warning, since they had no proof, as is often the case with these men. Their steel helms cover their faces, and of course they ride mainly at night.”

Maddy pulled away from Nicholas. “Which is why he could not be present when Sussex came to Lanercost. He would have recognized Musgrave and exposed him.”

“What is his purpose there?”

“He’s been sent to gauge the loyalty of the Protestant Dacres.”

“But that is what I am doing. Why must there be two of us?” How she wished Musgrave might be removed.

“It seems Lady Jane Dacre and her son may have differing loyalties. They want Musgrave primarily to keep an eye, jaded as it is, on Dacre.”

“Has my mission changed?”

Nicholas shook his head. “Nay. ’Tis unclear to me why Cecil needs two spies at Lanercost, but your duty will remain unchanged. Watch and observe Lady Dacre and take note of questionable behavior on the part of anybody else.”

Questionable behavior. Did her suspicions of Musgrave in Cath’s disappearance count? When Maddy thought about Cath, she was convinced his ruthlessness knew no bounds. “I found out today that the young serving girl who spurned him is missing. I’m frightened for her, Nicholas, and quite certain it’s Musgrave’s doing.” She explained what little she knew. “Can you do anything to help find her?”

“I’ll put some men on it, have them be on the lookout for her—or her body.” Nicholas gripped her shoulders. “In the meantime, you must stay away from him as much as possible.”

Trembling, she broke away from Nicholas. Now was the time to tell him, yet still she hesitated. What would he think of her? But if there was to be trust between them, there must first be truth. It was up to Maddy to convey it. She drew in a deep breath and said, “Musgrave was no stranger to me.”

A questioning brow arched. “I do not understand.”

It would be easier said if she were not facing him straight on, so she began to pace. “I was introduced to him in Carlisle, during a Midsummer celebration. It will seem difficult to believe, but back then he cut a dashing figure.” She paused and glanced at Nicholas, whose face had frozen. “He was tall, handsome, and seduced me with flattery. I was an innocent girl of nineteen years, completely taken in by it.”

“Bed me?” Maddy looked at him over her shoulder, wondering if her expression reflected the shame and regret she felt. “Aye.”

“God’s wounds, Madeleine! It is beyond belief that you lay with that man.” Even when he’d questioned her, she did not recall him raising his voice. Not like this. 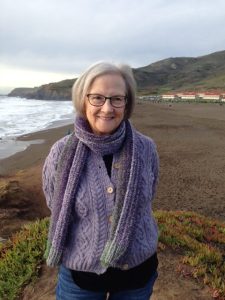 Pamela Mingle is a former teacher and librarian who was fortunate enough to choose writing as a third career. Or maybe it chose her. :) She loves to create romantic tales that play out against historical events and always includes some humor in her books. Pam and her husband enjoy walking in the UK--even though she's done her share of whining on those fifteen-mile days. The walking trips have been an ideal way to discover new settings for her books. Pam loves to hear from readers. Go to her website, http://www.pammingle.com/ to sign up for her newsletter. Subscribers learn first about giveaways and exclusive-to-subscriber content. You can also contact her via her website.