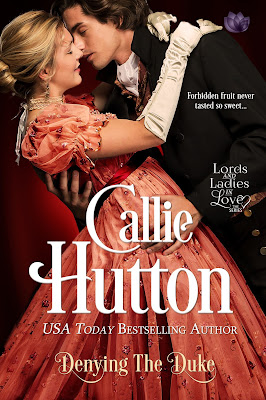 In Denying the Duke (Lords and Ladies in Love #3) by Callie Hutton, Alex and Patience fell in love four years ago until it was decided that she was to marry his brother. Now after his brother's death, Alex has returned home to take over his brother's position as Duke of Bedford. Discovering that Patience never married his brother, Alex is determined to win her back. But military life has left him suffering nightmares and uncertain he'll ever be able to give Patience the love she deserves. Will Alex be able to convince Patience that they deserve a second chance at happy ever after, or will the secrets he's keeping from her tear them apart?
This is the first book I've read by Ms. Hutton, and now that I've had the chance to read one of her books, I'll be looking forward to reading more because this story was enchanting, kept me entertained from start to finish due to the main characters back stories and their history, and had me smiling throughout as the heroine does her best to drive the hero crazy with wanting her. The way this story started had me charmed by this couple and their instant chemistry, yet also had me sympathizing with the pair because of what happens that tears them apart.
As for the dialogue, it was captivating and intense due to the main characters back stories that has made the heroine weary to trust and the hero suffering from his time in the military. It is also intense due to the battle the hero is facing with a dangerous man from his past that poses a huge threat to his and Patience's safety. Moreover, I felt sorry for the heroine when it comes to her father. The man is a bully of epic proportions, and I liked that she had someone to finally defend her against the man. I also liked how the heroine challenged Alex and made him work to get their relationship back to how close they were four years ago. Will Alex be able to win her over?
While the hero, he was absolutely charming and I loved his back story. I could understand why he felt the need to escape and join the military because losing Patience wasn't easy. I could sympathize with him for all that he's been through with feeling like he wasn't good enough to be a part of his family and losing the men he did while in the military. Yet, what I liked most about the hero is how he showed the heroine that she was worthy of being courted and how protective he was of the heroine when it came to the person coming after him. Someone that is determined to make the hero pay, if the person's demands aren't met.
Overall, Ms. Hutton has penned a worthwhile read in this book where the chemistry was powerful, the romance sizzling and the ending had me concerned for the main characters safety, yet left me smiling because the hero would do anything to win the heroine back, even if he had to resort to sneaky methods. However, it was the heroine's surprise that I loved the most, because these two deserve all the happiness in the world after all that they've been through. I would recommend Denying the Duke by Callie Hutton, if you enjoy Historical Romance, second chance romances, or books by authors Carole Mortimer, Caroline Linden, Anna Campbell and Darcy Burke.

BLURB
Four years ago, Alex, a second son, had planned a life together with Lady Patience. However, when Patience was betrothed to his brother, the heir, Alex left his family’s estate and joined the military.

Alex returns to assume the title Duke of Bedford when his brother unexpectedly dies. He is unprepared for both his new responsibilities and the reunion with Patience. The horrors of war are a heavy burden, and when he learns that Patience never married his brother, he is stunned.

Patience withstood the bullying of her fiancé and her father for four long years. She refuses to marry Alex just because he’s the duke, especially if he no longer loves her. How would that be better than what she has already endured? Promises made in their youth are not enough to overcome the changes life has wrought for them but love can grow and transform, if only Patience could believe that.

Dragging his thoughts back to the present, he walked from the church graveyard where all the Dukes of Bedford were buried in the family mausoleum, to the Abbey, his boots making a sucking sound in the mud.
He stopped on the stone pathway and studied the building. It looked exactly as it had all his life, and for generations before that. He, however, had changed significantly from the angry, brokenhearted young man who had left. War had carved him into a bitter, bedeviled-by-ghosts man. No softness remained from that addlepated young man in love.
Precisely how he liked it.
Patience, otherwise known as the Duchess of Bedford, would be holding court for the mourners who had come to comfort her on the death of her husband. Since he’d had no contact with his family in the four years he’d been gone, he had no idea if she and Cyrus had children. Of course, there wasn’t a son, or Alex would not have been summoned home to take up his duties as the new Duke of Bedford.
He snorted. One could only hope the pater was spinning in his grave as the prodigal son returned to assume the title he’d held so dear. He no more desired to be the duke than his father would have wanted him to be.
His thoughts returned to the Duchess of Bedford. It seemed nothing had changed since he left. Under the law, as his brother’s widow, Patience was just as off-limits to him as she had been as Cyrus’s betrothed. Of course, he had no reason to believe he still felt the same about her as he had four years ago. That Alex was dead, and he had the vile memories and dark dreams to prove it.
Before he could reach for the front door latch, the door opened. A new butler, unknown to him, stood there, stiff as a board. “Welcome home, Your Grace.”
Your Grace. 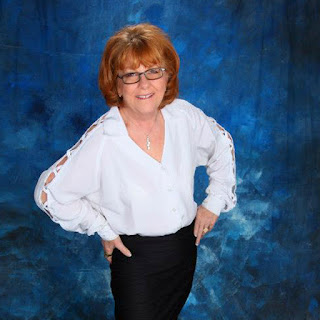 Callie Hutton, the USA Today bestselling author of The Elusive Wife writes both Regency and western historical romance, with “historic elements and sensory details” (The Romance Reviews). Callie lives in Oklahoma with several rescue dogs and her top cheerleader husband of many years. Her family also includes her daughter, son, and daughter-in-law, and twin grandsons “The Twinadoes.”


Callie loves to hear from readers. Contact her directly at calliehutton11@gmail.com or find her online at her Website. Sign up for her newsletter to receive information on new releases, appearances, contests and exclusive subscriber content.

a Rafflecopter giveaway
at 23:59