REVIEW: TEMPTED BY THE BRIDESMAID by ANNIE O'NEIL 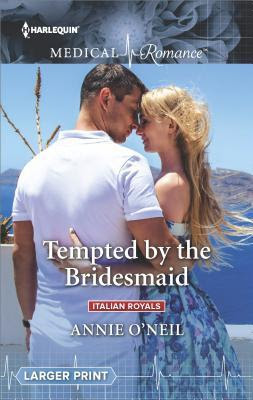 In Tempted by the Bridesmaid (Italian Royals #1) by Annie O'Neil, Francesca 'Fran' Martinelli will do anything to save her best friend from marrying a man that would cheat on her. However, it puts her at odds with brooding Italian surgeon Luca Montovano since he doesn't approve of what she does to stop the wedding. What's worse, she finds herself his niece's new therapist when she does a favor for her best friend. Will Francesca be able to convince Luca that she's not all bad, or will their differences keep them from achieving the forever after they both desperately need to be completely happy in life?
Ms. O'Neil always pens fantastic medical romances that entertain me from start to finish, and this story did exactly the same due to the main characters and the fact that they're at odds because of what the heroine did for her best friend at the woman's wedding. Certainly, she did the right thing and I liked how Francesca stuck by her decision and didn't allow the hero to make her feel bad about the choice she made. The way this story started sets the fast-pace of the story, and I liked how things become even more interesting once the heroine discovers who she'll be working for. Will Luca finally realize that Francesca isn't all bad?
As for the dialogue, I loved every moment the hero and heroine conversed, as Luca finds it harder and harder to resist Francesca, even though he believes he doesn't deserve happiness after what happened to his family and how he blames himself for the tragedy. Moreover, the dialogue was intense due to the main characters back stories, especially the hero and it made me want to cry for him due to what happened to his niece. Yet, the young girl is resilient and I liked how determined she is not to allow the fact that she's in a wheelchair to get her down. However, what I liked most about this couple is how much of a challenge the heroine provides the hero. She doesn't give up on what she believes in or wants, even though Luca does everything possible to keep her at a distance.
Luca has been through so much in his past and it's what makes him such an intriguing hero. He feels so much guilt, because of what happened to his family, yet he's determined to make things the best he can for his niece. Believing she deserves to find a chance to be more independent and I liked how Francesca helps her do that. However, what I liked most is that Luca would do anything to save the mountainside clinic he runs. Will he be able to save it before time runs out? While the heroine, she was just as good as the hero and had me completely captivated, because of how much she helps Luca's niece and how good of a therapist she is for other patients at the clinic. I also liked that she's not afraid to dive in and help, even though Luca is likely to have problems with her interfering, which is proven in one instance where she actually does good, but he doesn't appreciate her ability to make the patient feel warm and welcome when said patient was so standoffish.
Overall, Ms. O'Neil has penned another really good medical romance in this book where the chemistry was strong; the romance wonderful in the way they go from frenemies with benefits to achieving their happy ever after once Luca realizes how much in love he is with the heroine; and the ending wrapped this story up perfectly because of what Francesca wants to do to help Luca and because of how far this couple have come in their relationship.
I would recommend Tempted by the Bridesmaid by Annie O'Neil, if you enjoy the enemy to lovers trope, the opposites attract trope or books by authors Tina Beckett, Amy Ruttan or Amalie Berlin. Also, be sure to check out the next book of this duet (Claiming his Pregnant Princess), because the heroine's best friend was an absolute delight and is the heroine in it and certainly deserves her own chance at forever love after what she endured in this book.

BLURB
A woman to unlock his heart? The last time brooding Italian surgeon Luca Montovano saw bubbly heiress Francesca Martinelli was at his best friend's failed wedding. Sparks flew then, and now she's made a surprise appearance at his mountaintop clinic, bringing a much-needed whirlwind of laughter!
Aristocratic Luca just wants to be left alone to care for his orphaned niece. The scars on his face reach right to his heart, and he's learned to push people away. Until Fran forces him to see the world through her eyes!
BUY LINK: Amazon
at 12:00