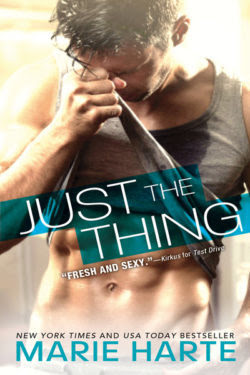 In Just the Thing (The Donnigans #2) by Marie Harte, guilt has haunted Gavin Donnigan ever since his friends died during a military mission, and the only person able to help him not drown in his culpability is Zoe York, especially since she understands lose after what happened to her twin sister. However, Zoe seems to be the only woman immune to Gavin's charms. Will he be able to win Zoe over, or will their chance at happy ever after slip away because Gavin is incapable of absolving himself of his guilt?
Ms. Harte is an author whose books I've been reading since her very first release, and she's an author that never fails to entertain me with her stories. So, of course, this book was enthralling, fast-paced and had me hooked from the very beginning. As Zoe is immune to Gavin's charms, which had me reading quickly, determined to discover how long it would take for  the hero to win her over. However, the moment the hero and heroine came face-to-face for the first time in this story had me smiling, because of Zoe's reaction to the hero. It's palpable she likes him, but she's not about to be like every other woman and fall under his charm.

As for the dialogue, it was compelling and a wonderful combination of intense moments and teasing banter that had liking both the main characters. There were moments where I laughed and moments where I wanted to cry, especially because Gavin is still coming to terms with what happened during his time in the military and Zoe is still coming to terms with losing her sister. Will they be able to help each other heal from their pasts? Moreover, the heroine is resilient and courageous and I liked how Zoe and Gavin help each other to heal, as they spend time together and their relationship goes from platonic to physical intimacy. Certainly, it takes Gavin longer, because facing those that his comrades in arms left behind isn't easy, but it's palpable that everything he does helps him in some way to heal from his past.

While the hero, he's been through so much and he has good and bad days, and it's understandable why he needs time to himself. I also liked how he teased Zoe with the nickname he gives her. Is she really the one in control of their relationship? Furthermore, I liked the tight bond Gavin had with his family and the prank wars. The pranks they played on each other had me totally amused and laughing, as each family member tried to one-up everyone else. Yet, what I liked most about the hero was his strength to talk about the past when it wasn't something he liked to talk about; and his courage to finally face the past because it was palpable that it would help him to heal just as much as having Zoe in his life did.

Overall, Ms. Harte has penned a heartfelt and steamy read in this book that ended wonderfully with the words Gavin says to Zoe to win her back and the way Gavin is still working towards forgiving himself. However, it was right towards the end that I loved, because of what happens with Gavin's sister and the chemistry she has with a secondary character, which could lead to Hope finding her own happy ever after in hopefully the next book of this series. I would recommend Just the Thing by Marie Harte, if you enjoy two main characters that help each other to heal from their pasts or books by authors Pamela Clare, Jaci Burton, Codi Gary and Kristen Proby.

Gavin Donnigan left the Marine Corps a shell of a man, hounded by guilt for deaths he couldn't prevent. But teaching a self-defense class at the local gym brings some stability to his life―along with a gorgeous leggy woman who won't give him the time of day.

Zoe York lost her twin sister to a freak car accident a few months ago. She's been struggling to bury her grief, but it isn't until she signs up for a self-defense class with its distractingly hot instructor that she begins to come out of her shell again. With the memory of her sister telling her to live a little, Zoe decides a fling with buns-of-steel Gavin Donnigan might be just the thing.

Soon they're sparring both in and out of the gym. And for the first time in a long time, each is looking forward to tomorrow.