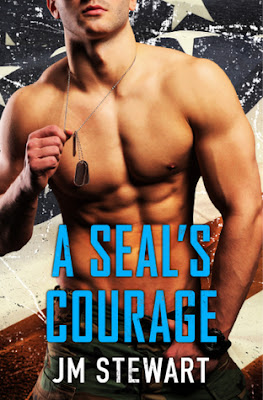 In A Seal's Courage (Military Match #1) by JM Stewart, all Lauren Hayes wants to do is lose her virginity. At her age, she should have lost it by now, but after years of being told sex is sacred, she's waiting for Mr. Right. However, the only man that matches up is her best friend's brother, Trent Lawson; a gorgeous man haunted by his time in the military. So, when the pair are matched up through a dating service, and then come up with a plan to spend a month together exploring their chemistry, neither expected to fall in love. Can Lauren help Trent heal from his past, or will Trent allow his past to continue holding him back from finding happiness?

The pages of this hot and steamy read really flew by and this story started off Ms. Stewart's new Military Match series wonderfully. The way this story started had me amused because of the conversation going on between Lauren and her friends. They're determined for Lauren to finally lose her virginity, so why shouldn't they take matters into their own hands by doing what they do. Poor Lauren! However, she can't believe how hard it's going to be to get up close and personal with her date, considering the man she's been matched up with.

The main characters back stories made for some intense dialogue, especially that of the hero, because of all that he's been through while he was in the military and losing friends that he believes he should have been able to save. However, the dialogue wasn't all intense. There were also some really good light-hearted moments and some dirty talk that had me loving how this couple's relationship progressed, as Lauren is the only one that's ever been completely capable of getting past the walls Trent put up when he returned home for good.

As for the hero, I absolutely loved him. He's been through so much and is haunted by his past, so it's understandable why it's hard for him to get close with anyone. I also liked how he was hesitant to get involved with the heroine, as she means a lot to him and he doesn't want to lose her. Yet, what I liked most about the hero is how he treated the heroine when he learnt the truth about her lack of experience and didn't judge her. While Lauren, she's kind, caring and I enjoyed how Trent opens up to her about what happened that ended his career and has left him isolated from those that love him. I also liked the advice the secondary characters gave her, as it was sound advice that she definitely needed to act on. Yet, what I enjoyed most about the heroine is how she helped the hero heal from his past and in return he helped her too.

Overall, Ms. Stewart has delivered a wonderful read in this book where the chemistry was off-the-charts, the romance scorching and the ending had me cheering for this couple's happy ever after, as Trent needs Lauren in his life if he's to ever fully heal from his past. I would recommend A Seal's Courage by JM Stewart, if you enjoy the sister's best friend trope or books by authors Christie Ridgway, Elle James, Cat Johnson or Sarah Robinson.

BLURB
A sizzling new series about three friends looking for love-and the sexy SEALs who are ready to fulfill their craziest fantasies.

He's a man on a mission.

Navy SEAL Trent Lawson isn't a man to back down from a challenge. Ever since he opened his eyes in that army hospital to learn the men from his unit were gone, Trent has been determined to live life in their honor. Even if that means facing his most terrifying mission yet . . . dating.
She's done playing games.

Lauren Hayes has standards. In fact, she's got an entire list of them. There's only ever been one man to come close to making the cut-Trent Lawson. Except her best friend's too-sexy-for-his-own-good brother is strictly off-limits.

When Trent and Lauren find themselves matched up by a dating service, the chemistry between them is nothing short of explosive. They both know getting involved is a huge mistake, but life is too short to walk away from something this good.