REVIEW: BEFORE THE DAWN by CYNTHIA EDEN 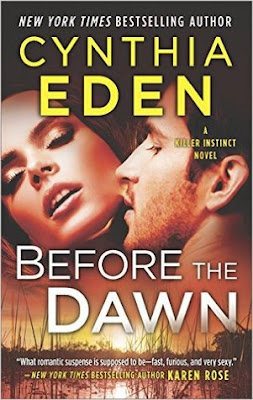 In Before the Dawn (Killer Instincts #2) by Cynthia Eden, years ago Dawn Alexander escaped from the serial killer known to everyone as the 'Iceman'. Haunted by the past and not being able to be around Tucker, because the 'Iceman' was his twin brother, she left him. Yet now, a killer with the same MO as Tucker's brother has surfaced and is determined to wreck havoc on Louisiana again. Dawn isn't about to shy away from investigating, but working alongside Tucker might just get them both killed, if they don't work through their issues stemming to the night Tucker had to kill his brother to save her. Will Dawn be able to give Tucker a second chance, even though he's a constant reminder of the worst night of her life, or are they both too haunted by the past to ever be together again?

Although I haven't read the first book of this series, I found this could easily be read as a stand-alone, and from the very first page I was drawn into this story because of what the heroine is going through and then the decision the hero has to make. However, it was from the moment that the hero and heroine are reunited years later that made this story a real page turner for me, as I wanted to know what happened to Tucker's brother and if he was the one killing again.

As for the dialogue, it was really intense and at times had my pulse racing due to the investigation; the deaths and how they're connected to the original crimes committed by Tucker's twin brother; and how the investigation is closing in around the hero and heroine and making it palpable that they are the end game for the killer. Will Tucker be able to keep Dawn safe? Will they figure out who the killer is before it's too late? Furthermore, the heroine is resilient and brave and I liked how far she's come since that fateful night where her life was turned completely upside down due to her being the target of a serial killer. I also liked how far she's willing to go to stay in the investigation, because she's not about to give up on figuring out what the madman committing the crimes now wants.

While Tucker, he's confident, determined and I liked how protective he was of Dawn. She means the world to him and always has and he's not about to let anything happen to her. I also liked the challenge Dawn provided Tucker, because after everything she's been through, she's not about to let the killer get to her a second time. Because facing the past and helping solve the case is another way to help her heal from the past and hopefully find her way back to the man she has always loved. Will Tucker be able to keep Dawn safe, so they can achieve their second shot at happy ever after?

Overall, Ms. Eden has penned a thrilling read in this book that takes readers on a wild ride with its twists and turns. However, in saying that, I had a feeling of who the killer was the more into this story I read and it turned out I was right. Still, that knowledge didn't worry me, because I couldn't stop reading, as I wanted to know what the madman had in store for the hero and heroine when it came to his end game. The way this story ended had me on the edge-of-my-seat due to the suspense, but I liked how things turned out for Tucker and Dawn, because they're meant to be together. I would recommend Before the Dawn by Cynthia Eden, if you enjoy romantic suspense, second chance romances or books by authors Sharon Sala, Heather Graham, Kat Martin and Mary Burton.

Ex-SEAL Tucker Frost knows that the world is full of evil. He saw it in the face of his own brother, Jason Frost, a cold, methodical, sadistic killer. A killer Tucker put down with his own hands in order to save Jason's final victim—Dawn Alexander, the only girl who got away from the infamous "Iceman."

It's Tucker's up close and personal experience with evil that's made him perfect for Samantha Dark's experimental profiling division in the FBI. Samantha wants agents who have personal ties with killers, who have unique insights into the minds of monsters. And when women start turning up murdered with the same MO used by the Iceman, Tucker is sent back to Louisiana to investigate.

The last person he expects to see is his ex-lover, Dawn. Ten full years have passed since the night that Tucker faced down his brother…and since he last saw Dawn. But the dark need still burns just as hot between Tucker and Dawn. As they grapple with a desire that never died, they must also face the shared shadow from their pasts. Both Tucker and Dawn have the same question—has Jason Frost come back from the dead to hunt again? And this time, will he succeed in killing the victim who got away?
BUY LINK:  Amazon
at 16:56