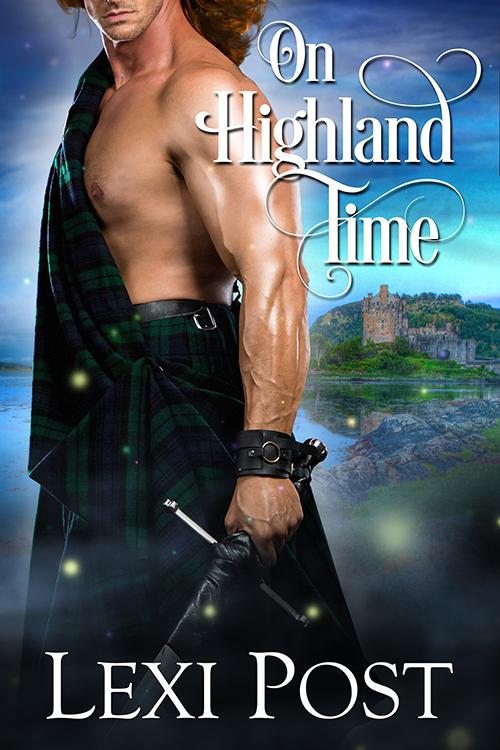 For fans of sexy Scottish Highlanders who know how to treat a woman like a lady.

When someone changes history, affecting the future, Diana Montgomery, the most experienced agent of Time Weavers, Inc., travels back to 1306 Scotland to change it back. Her mission, to find the culprit and ensure a minor clan chief dies in battle as he originally had.

Diana is well-prepared to infiltrate the small MacPherson clan. What she’s not prepared for is Torr MacPherson, the ruggedly handsome warrior with a kind heart and a steadfast loyalty—the Laird she’s supposed to ensure dies.

In On Highland Time by Lexi Post, Diana faces a tough challenge in infiltrating the MacPherson Clan. Yet, being one of the best agents for Time Weavers Inc has prepared her for anything. Well, at least she thought it had until she meets Torr MacPherson. Determined to find someone changing time and in turn affecting the future, Diana knows she can't afford to be distracted. Will Diana be able to complete her mission or will she lose the man she's falling in love with?

What do you get when you combine a sexy Highlander hero and a time-traveling heroine with plenty of determination to succeed in her mission? Well, the answer is an absolutely fascinating, exciting and captivating read that drew this reader in right from the beginning because the characters were fantastic, the dialogue entertaining and the plot fast-paced and filled with plenty of tension, emotion and tough obstacles for this couple to overcome. The way this story started had me liking the heroine immediately, as it's palpable her mission isn't going to be easy and she can't afford to be distracted. Will she succeed in finding the person she's after?

As for the dialogue, it was intense due to the main character back stories and everything these two go through on their journey to happy ever after since they have some seriously tough obstacles to overcome. Will Torr be able to handle what the heroine has been keeping from him? Will the hero give a relationship between them a chance, especially when one of them would have to give up a lot for the pair to be together? Moreover, the heroine is resilient, courageous and I liked how she challenges the hero because she doesn't fall for his charms as easily as the women in his time. I also liked the growing friendships she shares with various secondary characters and that she stands up for herself when it comes to people questioning her every move.

While the hero, he's been through quite a lot in his life and it's understandable why he doesn't do relationships. However, in saying that, I liked his determination to win the heroine over. Certainly, he has confidence in spades and can be quite charming. Will the hero be able to win Diana over? How long will it take for her to finally give in to the intense chemistry that exists between them? Yet, what I liked most of all about the hero was his loyalty to his family and those he believes he has a duty to protect. Will he be able to keep his people safe?

Overall, Ms. Post has delivered a wonderful read in this book where the chemistry between this couple was strong; the romance was hot and had me loving these two together, as the heroine knows what a bad idea getting involved with the hero is, but she gets involved anyway; and the ending left me completely satisfied with how these two come together again after their relationship goes awry. Will the hero be able to handle the decision he makes in order to be with the heroine? Will he be able to handle his new life? I would recommend On Highland Time by Lexi Post, if you enjoy Historical Romance, Time-Travel Romance or books by authors Jennifer Trethewey, Tamara Gill, Barbara Longley and Suzan Tisdale.

Torr took her reaction in stride and began a tender assault on her neck.

She pushed against him, and he allowed her a little space. She was grateful because despite her training, she doubted she could do much to take down such a huge man, especially if she didn’t want to hurt him. But he kept his arms about her waist.

It was everything. She wanted to cry and laugh at the impossible situation she found herself in, even as her body shivered with a growing need. She simply shook her head and tried to step back, but he held her with gentle strength.

Didn’t he understand? She needed to put more space between them, in so many ways. Her breaths came quickly, her body flushed from the desire he’d ignited. A desire she never remembered experiencing before. She closed her eyes and tried to think of the rolling mountains beyond the castle walls, but they faded quickly and instead she envisioned Torr, cupping her breasts.

She snapped open her eyes to find him staring at her, a crooked grin on his face.

“I want ye, Diana. Ye have a fire in ye that calls me like the spring sun to the seedling.”

Oh, Shakespeare, now he was a poet, too? She couldn’t do this. He was due to die… She had to find the Disruptor… She had to—

His deep voice soothed her. “I understand. Life here at Gealach is new and strange, and I have possibly presumed too much, too soon. “Ye miss yer clan, do ye not?”

She didn’t say anything. His kindness causing a lump to form in her throat. His warm, big body so close to hers with the scent of leather and the clean smell from his bath was so primitively male, he had her feeling safe, protected.

He pulled her body against his again. Instead of feeling physical attraction, she wanted to simply snuggle in. Hesitantly, she let her head fall against his shoulder.

As they stood there, his chest rising and falling in steady rhythm beneath her cheek, memories of her dad doing the same calmed her. When she’d done poorly on a test, not made the volleyball team, or when she was dumped by her first boyfriend in ninth grade, dad had held her just like this. Torr would make a good father…except he was destined to die.

She stiffened. Did Torr have any children after the Disruptor saved him? He deserved children.

He reacted to her body language and stroked her back. “I know it is hard. I too have lost many of my family.”

She pulled back to look at his face, anxious to hear what he’d reveal.

“Unlike ye, I didn’t know my mother. She died shortly after Kerr was born. Five sons took too much out of her. But my brothers and my father made a family.”

She put her hand on his chest, feeling the sadness behind his words. This man deserved comfort more than she did. He had endured so much, and yet still offered more to others.

He covered her hand with his and sighed. “The war has taken all but Kerr from me. Him and the few left in our wee clan. I’m glad ye joined us. I hope ye will eventually feel this is yer home.” His inner sadness called to her in a different way from his persuasive sexual advances. In that moment, he touched her heart.

“I’m sure I will. It is the only home I have now.” She grimaced inside at such a bald-faced lie.

Lexi Post is a New York Times and USA Today best-selling author of romance inspired by the classics. She spent years in higher education taking and teaching courses about the classical literature she loved. From Edgar Allan Poe's short story “The Masque of the Red Death” to Tolstoy’s War and Peace, she's read, studied, and taught wonderful classics. But Lexi's first love is romance novels. In an effort to marry her two first loves, she started writing romance inspired by the classics and found she loved it. From hot paranormals to sizzling cowboys to hunks from out of this world, Lexi provides a sensuous experience with a “whole lotta story.” Lexi is living her own happily ever after with her husband and her cat in Florida. She makes her own ice cream every weekend, loves bright colors, and you will never see her without a hat.