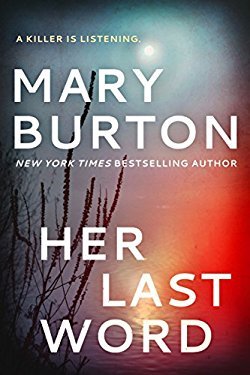 An unsolved crime pits a desperate woman against a relentless killer in New York Times bestselling author Mary Burton’s heart-stopping novel of psychological suspense…Fourteen years ago, Kaitlin Roe was the lone witness to the abduction of her cousin Gina. She still remembers that lonely Virginia road. She can still see the masked stranger and hear Gina’s screams. And she still suffers the guilt of running away in fear and resents being interrogated as a suspect in the immediate aftermath. Now Kaitlin has only one way to assuage the pain and nightmares—by interviewing everyone associated with the unsolved crime for a podcast that could finally bring closure to a case gone cold.But when a woman Kaitlin questions is later found stabbed to death, she fears that she’s drawn a killer out of hiding. It’s Detective John Adler’s fear that the murders have only just begun. Now his job is to keep Kaitlin safe. As a bond between Kaitlin and Adler builds, the past closes in just as fast—and it’s darker than Kaitlin remembers. Soon, her wish will come true. She’s going to find out exactly what happened to Gina. Someone has been dying to tell her.

In Her Last Word by Mary Burton, Kaitlin Rowe is still haunted by her cousin's kidnapping, especially since she was with Gina when she was taken. Yet, instead of doing something to help, she ran away for fear she'd end up taken too. However, now fourteen years later, she's finally ready to do something to find answers to what happened and prove that she shouldn't have been interrogated as a suspect when the crime was first committed. Yet, when a murder occurs that could be linked to her cousin's kidnapping, the detective assigned to the case is determined to keep Kaitlin safe. Will Detective John Adler be able to find the killer before Kaitlin becomes his next victim or will the pair lose their chance at happy ever after because someone is determined to silence Kaitlin permanently?

This was such an interesting and engaging read in the way it bounces back and forth between the past, as Kaitlin is haunted by the past and what happened to her cousin while in the present she's determined to find the truth once and for all and hopefully discover what is going on with the new murder. However, it was the gripping and pulse-pounding suspense that made this story a captivating read, as someone is determined to silence those that should have been able to help Kaitlin's cousin years ago.

With the dialogue, it was intense due to the main characters back stories, especially that of the heroine, as she went through a rough time when her cousin was kidnapped. Becoming a suspect wasn't easy, but I liked that she hasn't given up hope of ever finding out what happened. Will the heroine get the answers she wants? Moreover, the heroine is strong and brave in doing what she's doing because she can no longer handle the guilt or the nightmares that plague her. I also liked how she challenged the hero because she's determined to do the podcast and she's not going to let anything stand in her way. While the hero, he's good at his job, determined to get to the truth of what's happening now and what happened to the heroine's cousin in the past, and I liked how determined he was to protect Kaitlin because he knows she won't give up until she has answers.

Overall, Ms. Burton has delivered a really good read in this book where the chemistry between this couple was there from the moment they met and just keeps getting stronger the more time they spend together; the plot had me reading quickly, determined to discover what happened in the past to the heroine's cousin and why there were killings happening now; and the ending had me worried for the heroine, but had me liking how things worked out for these two because she needs the hero in her life just as much as he needs her in his. I would recommend Her Last Word by Mary Burton, if you enjoy romantic suspense or books by authors Rita Herron, Karen Rose, Nancy Bush and Tess Diamond.