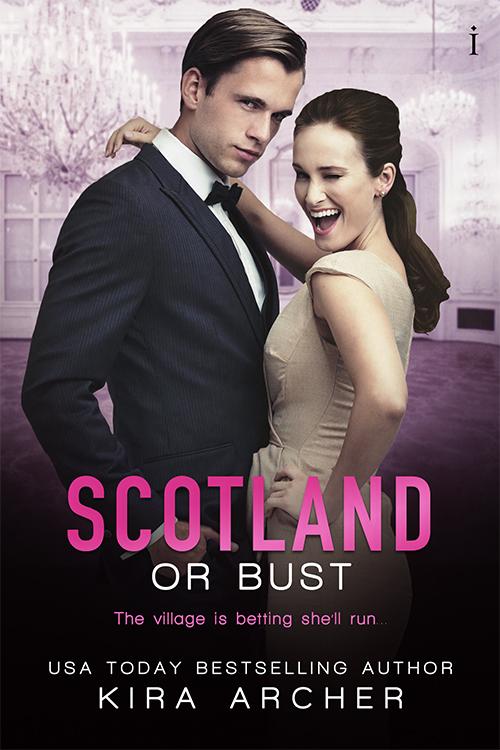 After dumping her boyfriend, Nicole Franklin impulsively jumps on a plane and heads to Europe. Sure, money and a job would have been nice to line up first. Even a visa, for that matter. So now she has to play tour guide at an Outlander experience for the most obnoxious man on the planet. Until she stumbles into the wrong bed in the middle of the night and wakes up in Harrison’s arms. Now his family thinks they’re engaged, and the entire village is betting on how long before she’ll be running for the hills.

Harrison Troy has a reputation in the town for burning through assistants. And the bubbly new one he’s just hired is likely no different. But his family quickly has them “engaged.” He should be upset, but she’s the perfect buffer for his interfering family. She says she doesn’t need another man in her life--even if he comes with a castle--and that’s fine with him. So why can’t he stop thinking about the woman who is charming everyone in the town, and maybe even him?

In Scotland or Bust (Winning the Billionaire #3) by Kira Archer, Harrison Troy is heading home to Scotland to help with the family business. However, he's in need of an assistant when his decides to quit on him. Luckily, he knows someone that can immediately step into the role; someone that needs a job and a place to stay. However, the more time Harrison spends with Nicole Franklin, the more he finds himself wanting the one thing he never thought he wanted -- a relationship. Will Harrison convince Nicole to take a chance on him or will she walk away from her chance at happy ever after because she's afraid he'll break her heart?

I love Ms. Archer's stories and I've got to say that this was a captivating and fantastic read where the main characters were interesting due to their back stories and everything they go through on their journey to happy ever after; the quirky secondary characters entertained me just as much as the hero and heroine, especially the hero's grandmother with her eccentricity; the dialogue was a wonderful combination of intense moments and playful banter, as the hero and heroine find themselves engaged; and the fast-paced plot was entertaining because the heroine has come to Scotland to stay and have an adventure while the hero is only in the country temporarily to help his family. Will the heroine be able to convince the hero to stay?

With the main characters, the heroine was resilient, courageous and I liked how she helped the hero navigate his time with his family, as it's not easy for Harrison to be around them. Sometimes, he finds they can be too much, which is proven by the fact they know nothing about personal boundaries. Yet, what I liked most of all about the heroine was her positive outlook on life and that she never let anything get her down. While the hero, I couldn't help but sympathize with him because of everything he's been through and I could understand why it's hard for him to come home to Scotland. He lost someone important and hasn't ever really gotten over the loss. Yet, in saying that, he's worked hard to get to where he is in his life and has done really well for himself. He's confident, driven and I liked how determined he was to help his family, even though playing tour guide on an Outlander experience is something he'd rather not be doing. Luckily, Nicole makes things interesting for him. However, what I liked most of all about the hero was the tight friendships he shares with secondary characters - Brooks, Chris and Cole, as they love to tease each other and aren't afraid to give Harrison advice when it comes to his relationship with Nicole.

Overall, Ms. Archer has delivered another really good read for her Winning the Billionaire series where the chemistry between the main characters was heady and convincing; the romance was hot and shows off their chemistry wonderfully; and the ending had me loving the lengths the hero goes to in order to show the heroine that he wants her in his life. Will she take a chance on him? I would recommend Scotland or Bust by Kira Archer, if you enjoy the opposites attract trope, the fake relationship trope or books by authors Marissa Clarke, Tawna Fenske, Stefanie London and Cat Carmine.