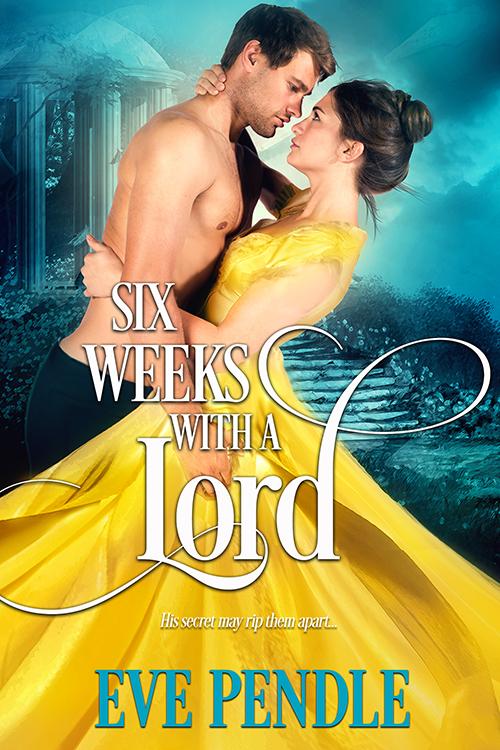 Grace Alnott is out of time. To save her younger brother from an abusive guardian, her merchant father’s will demands she must marry a peer. Handsome but destitute Everett Hetherington, Earl of Westbury agrees to her offer of a marriage of convenience but stipulates she must live with him for six weeks. No matter how honorable he seems she can’t allow him to get too close, because the aristocracy cannot be trusted.

Six weeks. Major Everett Hetherington, new Earl of Westbury, has exactly six weeks to convince the very independent Grace Alnott to spend the rest of her life with him. Despite her belief she doesn't belong in his world, he must tempt the alluring Grace into staying, because he has fallen for her. Hard. He just has to ensure she never discovers his secret.

In Six Weeks with a Lord by Eva Pendle, Grace Alnott is determined to have her independence and be reunited with her brother, but the only way that will happen is if she marries a man with a title. Luckily, Everett Hetherington, the new Earl of Westbury is looking for a wife; someone with enough money to wipe the family debts. Will Everett be able to convince Grace that their marriage of convenience is so much more or will the pair go their separate ways once the terms they've set for the marriage are fulfilled?

What an utterly fantastic, fast-paced, captivating read Ms. Pendle has delivered in this story where the main characters were fascinating due to their back stories, as Grace will do anything to get her brother back while the hero needs Grace in order to wipe the family debts and save the family estate; the compelling dialogue drew me in from the very beginning and had me loving this couple's growing relationship; and the obstacles these two face to be together had me wondering whether they would be able to overcome them. Will Grace and Everett take a chance on each other?

As for the dialogue, it was intense due to the main characters back stories, as Everett is an honorable man and determined to pay the family debts, even though the debts belong to his deceased brother while the heroine can't believe what a mess her late father has made. Why wasn't Grace made her brother's guardian? Moreover, the heroine was strong, determined to fight for her independence and I liked how she did her best to resist the hero because she has plans for her life that don't include staying with Everett. I also liked how far she was willing to go to help her brother because she's not about to let him stay in the situation he's in now.

While the hero, he's confident, charming and I liked how far he's willing to go to get the heroine to stay because he needs more from her than what they've agreed to. Will he be able to win Grace over? I also liked how far he's willing to go to help the heroine get her brother back. Will he find a way to help Grace? Yet, what I liked most of all about the hero was his determination to fight for his relationship with Grace because she comes to mean so much to him.

Overall, Ms. Pendle has delivered a wonderful debut novel in this historical romance where the chemistry between this couple was intense; the romance was delightful and had me liking that the heroine took a chance on the hero; and the ending had me loving what the hero does for the heroine because it shows that he will do anything for her. Then again, she's everything he wants in his life, so why wouldn't he do everything in his power to prove his love. I would recommend Six Weeks with a Lord by Eve Pendle, if you enjoy Historical Romance, the marriage of convenience trope or books by authors Sarah MacLean, Maggie Dallen, Tina Gabrielle and Harmony Williams.

“A half share of her dowry. Fifty-thousand,” George announced.

Everett snapped around to look at his brother fully. Fifty-thousand pounds would pay the debts and current debts of the farmers and leave enough money to support the estate for a couple of years, until it could pay its own way. “Go on.”

George smirked. “The gossip is she’s from trade, thinks herself some sort of independent woman, and is offering a marriage in name only. Wants to live on the continent, apparently.”

“A marriage of convenience? Very expedient.”

Then she reappeared, gliding right past him. She was resplendent in a dress the color of sunshine, her head tilted back as she waltzed, showing the curve of her neck and the angle of her jaw. Her dark hair gleamed, complemented by the brightness of her dress, as she danced like she was the only person in the room who mattered. Her jaw line was too strong for conventional beauty, but something about the way she held herself was mesmerizing. She was like a cat walking along uneven ground, not perfect, but compelling.

“Exactly.” George had the tone of a vindicated brother. “Miss Alnott is pretty, too. Just over there.”

Reluctant to look away from the dancers, Everett glanced to see whom George indicated. Sensation shot down his spine.

“The lady in the primrose-yellow dress,” George said.

He couldn’t take his gaze from her. Miss Alnott. “I see her.”

“Yes, yes,” he interrupted. “I’m not Peter. I’m not going to gamble everything away.”

George wandered off and Everett gave himself up to watching Miss Alnott moving around the room slowly as she and her partner traversed the floor. She was gathering attention. There were several sharks circling, their fine wool black coats gleaming. The matrons were talking about her, lips pursed with disapproval. Her pronouncement must be the reason for the hum of life in the room.

A fast step in the waltz made the wide skirts of her dress shine. It was a gold dress, really. An unsubtle ploy to give a man the impression she was financially desirable. She certainly looked the part of an aspiring aristocrat, smiling fixedly at the room.

This was the first cut of interest he’d felt since he’d begun his fortune hunting. It would be something to have such a lady for a wife: so beautiful and confident. Of course, if she wanted to live abroad, she wouldn’t be a true wife. But what did it matter? She would be like a wild cat living on the fringes of his estate, untamed and free, but technically his. Wary, coat gleaming, dangerous. If he found a wild cat, he would entice it with cream and take care of it, like he did with everything that was his.
“I suppose you think me selfish to not want to marry a man I neither love nor respect.” Her mouth was tight. “But I refuse to martyr myself by marrying Lord Rayner, when the result would be a totally powerless state after the marriage.”

Ah. Just a vague fear of a bad marriage. It seemed rather superficial to want love more than wanting to stay with family, but hadn’t he been cautious about marrying the wrong person? And as a man, all he had to be concerned about was a lack of conjugal bliss, not actual bodily harm. He was the owner, not the property.

“I can understand wanting love in your marriage.” He let his tone dip as he said the words and was gratified to see an answering visceral reaction in Grace. She flushed. This was where he would link the attraction between them with something more. “You know, love can grow in surprising places.”

Her neck stiffened and she sauntered away, looking deliberately around the room. Everett found he was anticipating her response.

“There are some leaks in this place, I concede. And there are holes in the curtains that let in light. Perhaps there are the prerequisites to grow something in this house.” She swung around to stare down at him. “But Everett, love is not a weed.”

Eve lives in England and writes angsty, snarky and passionate Victorian era romance. She has National Trust membership, a big-boned cat, and a crazy dog. She loves wearing dresses and eating chocolate.