REVIEW: FROM YOUR HEART by SHANNYN SCHROEDER 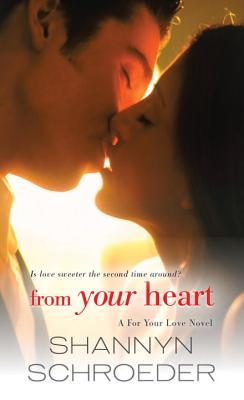 From Your Heart
For Your Love #4
By Shannyn Schroeder
Releasing March 27th, 2018
Zebra

SOMETHING OLD. . .
Kathy "Play it Safe" Hendricks isn't used to taking risks, or fighting for what she wants. But as Maid of Honor in her best friend's wedding, Kathy will do anything to make sure it all goes smooth as bridal silk. She didn't plan on the Best Man being Kevin O'Malley, the hotter-than-flames, can't-commit bad boy who broke her heart five years ago.
SOMETHING NEW . . .
Kevin has never forgotten Kathy, the sweet, sexy brunette who ghosted him just when he was starting to think he was ready for something more. Kathy was different from the other girls Kevin dated, and five years later it's truer than ever. Only now he senses a new strength in the shy girl who left him hanging all those years ago. And this time, he's not going to let her get away . . .
Sometimes first love needs a second chance.

In From Your Heart (For Your Love #4) by Shannyn Schroeder, Kevin O'Malley has never forgotten about Kathy Hendricks. So, he's determined to make things right and win back the woman who ghosted him after she thought their relationship was way more serious than he did. Will Kevin be able to win Kathy back or will she end up breaking his heart this time around?

I found it really hard to get into this book at first because I wasn't feeling any sort of connection between the main characters, but I'm glad I stuck with it because it was a very enjoyable story in the end. Really, the dialogue drew me in because Kevin is charming, confident and so determined to win the heroine over. Can he prove to Kathy that he's changed? Will the heroine give him another chance after how things ended between them?

As for the dialogue, it was entertaining due to the main characters back stories and everything these two go through on their journey to happy ever after because winning back Kathy isn't easy. Does the once a cheater always a cheater adage make it impossible for the heroine to even consider giving Kevin another chance? Moreover, there were moments when I wanted to scream at the heroine because Kevin is a good guy that made a mistake. However, in saying that, she's been through a lot and it's understandable why she finds it hard to trust. Really, everything that's happened in her life has made her the independent woman she is. While the hero, he's confident, charming and I liked how determined he was to win the heroine over because he wants her back. I also liked the close relationship he has with his friends and that he isn't afraid to tease his brother's soon-to-be bride. Really, the pair have a fun friendship, which sometimes feels like their enemies. But, in fact, their relationship feels more like they're frenemies.

Overall, Ms. Schroeder has delivered a really good read in this book where I felt no chemistry between this couple in the beginning, but found their connection gets stronger the more time they spend together; the romance was nicely-detailed and had me liking that the heroine was willing to give the hero another chance, even though she doesn't know whether she'll ever be able to fully trust him; and the ending had me loving that Kevin doesn't give up on Kathy, even though she gives him every reason to. Will she finally realize that Kevin is the right guy for her and always has been? I would recommend From Your Heart by Shannyn Schroeder, if you enjoy second chance romances or books by authors Melanie Shawn, Samantha Chase, Terri Anne Browning and Stacy Finz.