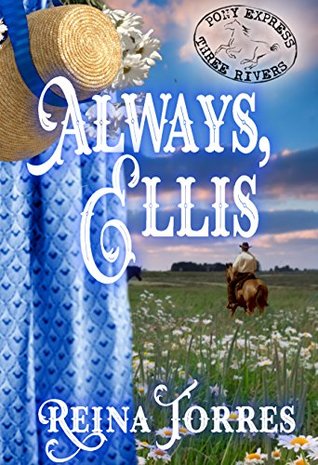 The Express took men and rode them hard across the West. That adventuring spirit belonged to men full of life, ready for whatever met them on the trail, everything, except for love.
Ellis Cooper found himself in with a bad crowd and when the going got tough, the others left… left him to rot in jail. Released from prison he finds himself taking a job with the express under the watchful eye of his uncle Samuel. Eager to take the right path in life, he finds his new lawful life endangered when two of his former ‘friends’ try to involve him in trouble. He resists for many reasons, but the most important one is the new Marshal hired by Three Rivers. You don’t want to be on the bad side of a man like Marshal Thomas Halston, especially when his pretty daughter makes Ellis wish he could go back and change all of his bad decisions. How is a lawman going to trust his only daughter to a man who spent time behind bars?
Virginia Halston intended to be in Three Rivers as long as it took to help her father set up his home and then she was going to return to St. Joseph to her job as a seamstress. As she goes from sewing curtains to taking on what seems to be a backlog of repairs for the miners, Virginia wonders if her father’s new home will become one for her as well. That includes some rather disconcerting moments with the new express rider. Everyone seems to warn her away from Ellis, but there’s something in his eyes that only make her want to get closer to him. Is it so wrong for her to give him a little bit of her heart when he’s trying so hard to do the right thing for once in his life? While it seems like everyone is trying to keep Ellis and Virginia apart, they’re only getting closer. As some of his old acquaintances try to draw him back into the darkness, Ellis has to make a decision: stand up against them and lose Virginia, or lose his soul forever? The Three Rivers Express Series is a set of Sweet Western Historical Romance which will be written alternately by Reina Torres and Nan O’Berry Starting with the Spring of 1860 when the Pony Express began their service of mail delivery between St. Joseph, Missouri and Sacramento, California, each of the Three Rivers Express books will take on a new season and a different rider.

In Always, Ellis (Three Rivers Express #5) by Reina Torres, Ellis Cooper is determined to make a new life for himself after getting released from jail. However, it isn't easy, but at least he has a job, somewhere to live and someone who believes in him -- his uncle. Yet, there's another person that believes he deserves a second chance and that's Virginia Halston -- the sheriff's daughter. Will Ellis be able to convince Virginia to take a chance on him or will he lose her because of his past?

I have loved this series from the very first book and this is the best book of the series by Ms. Torres yet. Really, there was something so special about a hero trying to start over again after everything that's happened to him and he works hard to get beyond the past. The way this story started had me sympathizing with the hero, as coming to Three Rivers isn't easy for him, especially with several people judging him for his past instead of giving him a second chance. However, it was from the moment the hero and heroine come face-to-face for the first time in this story that had me loving that someone was on the hero's side.

As for the dialogue, it was intense due to the main characters back stories and the obstacles these two face on their journey to happy ever after including the hero's past coming back to cause trouble all over again. Will Ellis be able to protect Virginia? Will the hero be able to find a way for his past to stop coming after him once and for all? Will the hero put his trust in people that can help him escape his past? Moreover, the hero is resilient, courageous and I liked how determined he was to win over the heroine, as he never imagined he'd get a second chance like he has and he wants to make the most of it. I also liked how good the heroine is for the hero, as he needs people on his side. Yet, what I liked most of all about the hero is his kind and caring nature and that he would do anything to help someone in need, which is proven by what he does for one of the secondary characters that need him.

While the heroine, she's strong, brave and I liked the new found friendships she has with a couple of the secondary characters, as she needs friends that are there for her through thick and thin. I also liked how she handles everything she goes through and that she gave the hero a chance. Then again, what happened in his past wasn't all his fault, so he doesn't deserve anyone bad-mouthing him. Yet, what I liked most of all about the heroine was her kindness and the close relationship she has with her father. Certainly, he's overprotective of her, but his concern for her is understandable after what happened in the past and what happens to her in this story.

Overall, Ms. Torres has delivered a captivating and heartwarming tale in this fifth book of her and Ms. O'Berry's wonderful Three River Express series where the chemistry between this couple was heady and convincing; the romance was delightful and had me loving these two together; and the ending had me worried for one of the main characters, but had me loving how everything works out for the best for the pair since these two are so good together. I would recommend Always, Ellis by Reina Torres, if you enjoy Historical Romance or books by authors Nan O'Berry, Kathleen Ball, Caroline Fyffe and Caroline Clemmons.