Don’t miss this sexy small town romance with heart and heat. A cocky small town farmer must decide whether to reveal his secrets or follow his family legacy.…CROSSING THE LINE will delight fans of IT STARTED WITH A KISS by Marina Adair and SWEET LITTLE LIES by Jill Shalvis! 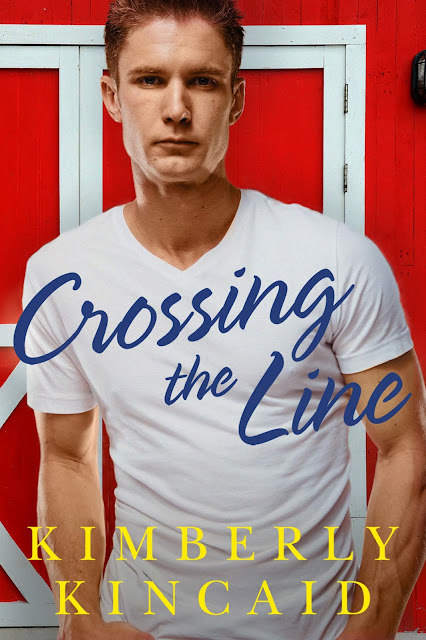 In Crossing the Line (Cross Creek #2) by Kimberly Kincaid, when she learns her best friend's magazine is struggling, Scarlett Edwards-Stewart decides to help her friend out by going to Cross Creek and doing a feature on the Cross Brothers and their farm. Yet, the more time she spends with Eli Cross, the more she finds herself falling for a man who is so much more than he seems. Will Scarlett help him to finally follow his dreams, or will family drama keep him in Cross Creek?

What an incredible read Ms. Kincaid has penned in this second book of her Cross Creek series where the main characters entertained me from start to finish due to their back stories and their growing relationship; the dialogue was a wonderful combination of intense moments and teasing banter that had me cheering for this couple's happy ever after; and the ending had me spilling happy tears, because no one is more deserving of happy ever after than this couple. The way this story started had me sympathizing with the hero, as he's always in the wrong in the eyes of his brother Owen. However, it was from the moment the hero and heroine come face-to-face for the first time that had made this story a real page turner for me. Will Eli warm up to the heroine and give her a chance?

Both the main characters were enthralling, well-developed and I loved their back stories. Eli has always felt like the odd one out when it comes to his family. He has dreams that don't involve working the family land for the rest of his life. Will he take a chance and pursue what will make him happy? Will the heroine's encouragement and the opportunity he's given finally get him to open up to his family about all he's achieved? While the heroine, she's achieved so much, despite the fact that she had it tough growing up in foster care. Moreover, I liked how independent the heroine was and how she stood up for herself when it came to the way Eli was treating her when they first met. Yet, what I liked most of all about the heroine is how much of a challenge she provided the hero and how she managed to get him to open up to her, so she could get the story she was looking for instead of him continuing to resist her.

Overall, Ms. Kincaid has penned a wonderful and hot read in this book where the chemistry between this pair was off-the-charts. The way this story ended had me loving the hero more than I already did, as Eli comes to terms with his father's secret and realizes just how much he loves Scarlett. How could he possibly give up the opportunity they've been offered? I would recommend Crossing the Line by Kimberly Kincaid, if you enjoy small town romances or books by authors Marina Adair, Catherine Bybee, Samantha Chase and Erin Nicholas.

BLURB
Cocky farmer Eli Cross plays twice as hard as he works. When his latest stunt drums up a heap of negative PR for the family farm, he grudgingly agrees to play host to an ambitious New York City photographer. Her feature on Cross Creek could be just the ticket to show the country what the Cross brothers do best…which is more problem than solution for Eli.
Scarlett Edwards-Stewart has photographed everything from end zones to war zones. She’s confident she can ace this one little story to help her best friend’s failing magazine. At least, she would be if her super-sexy host wasn’t so tight lipped. But the more Scarlett works with Eli, the more she discovers that he’s not who he seems. Can his secret bring them closer together? Or will it be the very thing that tears them apart?
BUY LINKS: Amazon / B & N

Just as she finished her last piece of toast, a knock sounded off on the door to Scarlett’s apartment. Her heart did the samba in her chest, but she pressed a hand over the front of her dark-green tank top to cover the commotion. Eli had said he wanted to stick to business. She could totally do that. They’d be professional. Polite. Work only.


But the perfectly professional, perfectly polite greeting Scarlett had worked up in her head completely disintegrated at the sight of Eli standing on her doorstep with a charming-as-hell smile on his face and a brown paper bag in his hand.


“Morning.” He extended the bag, looking hotter than anyone had a right to. Seriously, who made a hoodie and a pair of banged-up jeans sexy? At five o’clock in the morning? It just wasn’t right.
“What’s this?” she blurted as she took the bag from his outstretched hand, and God, could she be any more graceless?

If Eli was bothered by her distinct lack of a filter, though, he sure didn’t show it. “This is a vegan breakfast burrito.” He paused, tipping his blond head slightly as he added, “And we can add that to the list of things I never thought I’d say.”
Scarlett blinked, trying to piece the words together in a way that made sense. “You bought me a vegan breakfast burrito?”
“No. I made you a vegan breakfast burrito.”
The shock pumping through her veins must’ve taken a detour over her face, because Eli took one look at her and backpedaled. “Okay, sort of. I went up to the main house an hour ago to get a bunch of crates that didn’t fit in the box truck, and Owen was making breakfast burritos. I helped him come up with one for you that fits the bill.”
“Why?”
Scarlett clamped down on her lip just a second too late to bite down on the overly bold question, but to her surprise, Eli just laughed.
“What, is breakfast some sort of sacrilege once you cross the Mason-Dixon Line or something?”
Seriously, she needed to build some sort of immunity to that here-comes-trouble smile of his. Either that or she was going to have to head back to that cute little town where she’d gotten her coffeepot for some cute little batteries to fuel her cute little vibrator.
“No! Nope, mmm-mmm,” she barked, chasing the burn from her cheeks with a sweep of her fingertips. Sure, Eli was good-looking (Fine. He was sex on a stick. Potato-potahto). But they needed to stay professional. That’s what he’d said he wanted.
Only from the look of the cocky, come-and-get-it smile on his face right now, Scarlett wasn’t so sure he’d meant a single word. 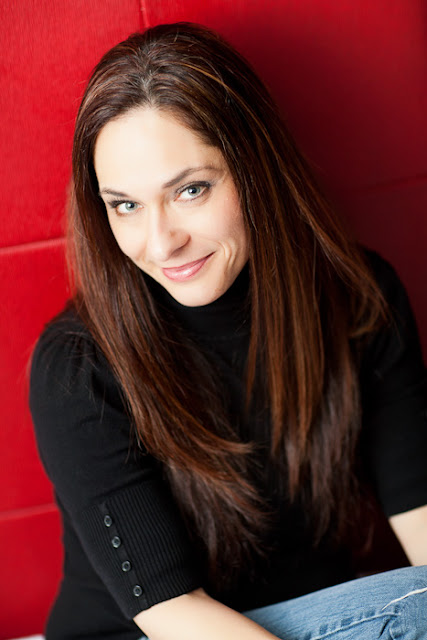 About Kimberly Kincaid
Kimberly Kincaid writes contemporary romance that splits the difference between sexy and sweet and hot and edgy romantic suspense. When she’s not sitting cross-legged in an ancient desk chair known as “The Pleather Bomber”, she can be found practicing obscene amounts of yoga, whipping up anything from enchiladas to éclairs in her kitchen, or curled up with her nose in a book. Kimberly is a USA Today best-selling author and a 2016 and 2015 RWA RITA® finalist and 2014 Bookseller’s Best nominee who lives (and writes!) by the mantra that food is love. Kimberly resides in Virginia with her wildly patient husband and their three daughters.
Connect with Kimberly at: Website | Facebook | Twitter| Goodreads | Instagram