REVIEW: UNDERCOVER WITH THE HEIRESS by NAN DIXON 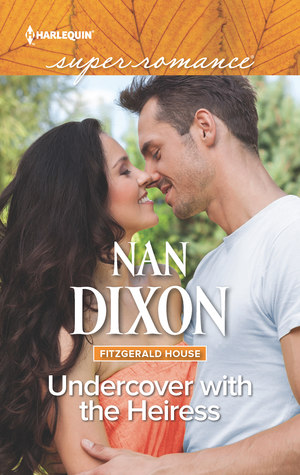 In Undercover with the Heiress (Fitzgerald House #5) by Nan Dixon, FBI agent Kaden Farrell has an important mission to accomplish and doesn't have time for distractions. But heiress Courtney Smythe is proving more and more tempting every time he's around her. However, she may be the only one capable of helping him get the little girl who is the key to his investigation to open up about things she could possibly know to do with her criminal mother. Will Kaden put his trust in Courtney, or will he destroy their chance at happy ever after before they've even begun getting to know more about each other than the fact Courtney is a spoiled brat who is good with children?

This is the first book I've read by Ms. Dixon, and it was a wonderful read that I thoroughly enjoyed, despite the way it started and my thinking the heroine was nothing more than a rich girl that was too spoiled and definitely needed what her father does to finally become the woman she's meant to be. A woman that can be independent and find her way in life, instead of relying on her father's money to give her everything she wants. Yet, in saying that, I liked how she realized she might not get her old life back and began to become this totally different person. Someone that could live without being spoiled and learn to become independent. Will she realize that money isn't everything; that money isn't the key to happiness?

As for the dialogue, it was very entertaining, fast-paced and had me enjoying the hero and the heroine due to the suspense of this story; the way they interact with each other that illustrates the strong chemistry between them; and the way Kaden begins to see that Courtney is more than just a spoiled rich girl the more she gets to know her. Moreover, I loved how strong and brave the heroine is once she realized her father won't change his mind when it comes to what he's done to make her finally start to take control of her life. I also liked how good she is with the children she cares for and that she would do anything to protect them, which is proven by what she does for the little girl that is the key to Kaden's investigation. While the hero, he's confident, determined to his job no matter the consequences of keeping the fact that he's undercover a secret, and I liked how protective he was of the heroine, because he knows how dangerous things could get with the people he was after.

Overall, Ms. Dixon has delivered a fantastic and riveting read in this book where the secondary characters were just as good as the main ones and really help the heroine to find the direction she wants her life to take. The way this story ended had me worried for the main characters, but I liked the way it brought the hero and heroine together after everything that happens between them. I would recommend Undercover with the Heiress by Nan Dixon, if you enjoy the sexy protector trope, the opposites attract trope or books by authors Julianna Morris, Stephanie Doyle, Kathy Altman and Rachel Brimble.

BLURB
What's behind her beautiful mask?

FBI agent Kaden Farrell is on a mission. He's undercover at Fitzgerald House in Savannah, where a little girl is the key to his investigation. And that's what he needs to focus on, not a down-and-out heiress whose jeweled eyes haunt his dreams.

Courtney Smythe might be spoiled, but when Kaden notices her ease with the children at the B and B, he sees the beauty beyond her looks. Getting close to Courtney will help his case, and giving in to attraction is the right thing to do. Even if it means perpetuating a lie.