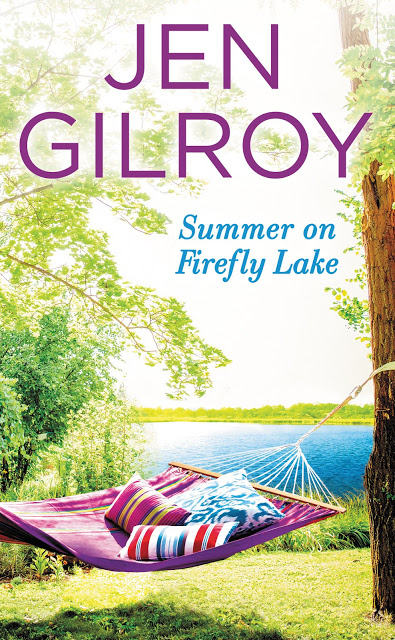 In Summer on Firefly Lake (Firefly Lake #2) by Jen Gilroy, Mia Gibbs is moving on after her divorce and is determined to provide a good life for her daughters in the small town of Firefly Lake. But it's hard when Nick McGuire is always around, determined to lend her a helping hand, and complicate the new life she's making for herself. Knowing that Nick isn't staying in Firefly Lake any longer than he needs to, Mia knows she should keep her distance. Yet, denying her feelings for the former bad boy is proving more difficult than she could have ever imagined. Will she and Nick have a shot at happy ever after, or will her ex-husband find a way to ruin everything?

This is the first book I've read by Ms. Gilroy and what a delightful read it was, encompassing the friends to lovers trope; a woman determined to not have to rely on anyone; a hero that needs to find a way to finally overcome his past; an ex-husband that is determined to have Mia fall in line with what he wants, even if it means trying to blackmail her; and an ending that I was absolutely charmed by, because Mia is the best woman for Nick and he needed to realize that before it was too late for the pair to achieve their happy ever after.

As for the main characters, their back stories really drew me into this story and had me sympathizing with the pair, as neither want a relationship. Mia is determined to be independent and not rely on others when the going gets tough, especially after what her ex put her through before they divorced. Seriously, I liked how much of a fighter Mia was and that she didn't allow her husband to intimidate her with his threats. Yet, what I liked most about the heroine is how good of a mom she is and how kind and caring she is, especially with what she's doing for Nick's mom. While Nick, I could understand why he's afraid to give a relationship a chance for fear of rejection, especially when he believes he has nothing to offer a woman. I also liked how good of a son he was and that he would do anything to take care of his mother, even though she wasn't all that happy about the decision he was making for her future.

Overall, Ms. Gilroy has penned a wonderful read in this book where there was plenty of chemistry between Mia and Nick, which had me reading this story quickly, determined to discover how things would end up for this couple. Since Nick was determined to fight their happy ever after, because he believed Mia deserved more. The way this story ended had me loving the hero more than I already did, because it's palpable how much he loves Mia and his words and actions to win the heroine back proves how much he loves her and wants her in his life forever. However, it was the epilogue that wrapped this story up perfectly, as Nick is the dad to Mia's girls that their dad never has been. He's there for them whenever they need him. I would recommend Summer on Firefly Lake, if you enjoy second chance romances, the friends to lovers trope, or books by authors Mira Lyn Kelly, Tracy Brogan, Marie Force and Debbie Burns.

Attorney Nick McGuire wasn't meant to be a family man. His career has always been his focus and after taking time out to help his mother, he's ready to get back to the city . . . until Mia and her daughters arrive at Firefly Lake. Mia is beautiful and intriguing, and it doesn't take long to realize being "just friends" will never be enough. As the summer nights turn colder, Nick will have to choose between the life he's always wanted . . . and the woman he can't live without.