REVIEW: BENEATH THE SURFACE by REINA TORRES 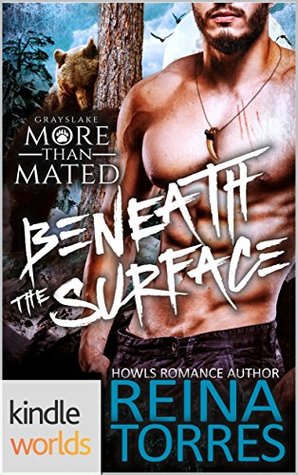 In Beneath the Surface by Reina Torres, Grace would rather be travelling the world and experiencing new things than settling down. But when she arrives in Grayslake to spend time with her Aunt and Uncle before her next big adventure, Grace finds herself the centre of attention, especially after she discovers how far the shifters in town will go to make sure she never reveals their secret. Will she end up sacrificing her chance at forever after with her Mr. Right, so she can continue to live the life she craves; or will she make things right with the man that she's falling in love with before it's too late?

Ms. Torres has produced magic with this book in the way it entertained me from start to finish due to the wonderful main and secondary characters; the compelling dialogue that had me hoping Grace would make the right decision before it was too late; and the ending that had me cheering for this couple's happy ever after, because Grace gets to have the best of both worlds -- forever happiness and continuing to be able to explore to her heart's content. The way this story started had me liking the hero immediately, as he needs the chance to be able to start over somewhere new. Will the alpha, the man they call the Itan give him the chance? However, it was from the moment the hero and heroine met that had me totally hooked, as Travis knows what he wants and what he wants is Grace.

As for the dialogue, it was a delightful combination of intense moments and playful banter that had me enjoying this couple's growing relationship, even though there were moments where I wanted to shake the heroine to make her realize what a mistake she was making. When will she realize her feelings for Travis were different to anything she's ever felt before? Moreover, the heroine is strong, brave and I could understand her desire to not settle down. Since it wasn't as if her mom provided a good example when it came to love. I also liked how feisty the heroine was when it came to helping those she cared about, especially the hero when he was facing trouble with the Grayslake Enforcer, Van.

While Travis, I absolutely loved him. He's the triple D threat - dreamy, delightful and downright delicious -- when it comes to Ms. Torres descriptions of him from the heroine's point of view. He's also confident and I liked how determined he was to win the heroine over because she's his mate and there's no way he could live without her. Yet, what I liked most about Travis is the decision he made towards the end when it didn't seem like things were going to go work out for him and Grace. He's protective and doesn't want to see her hurt, even though they both know the decision she's made is the wrong one. Will Grace realize her decision is the wrong one before it's too late for her and Travis to be together?

Overall, Ms. Torres has penned another really good paranormal romance in this book where the chemistry between this pair was fantastic and had me hoping that everything would work out for the best, especially since the heroine was so stubborn when it came to the decision she had to make to help keep her off the Itan's radar. The way this story ended left me with a huge smile, because of the decision the heroine made and how she was given the chance to have the best of both worlds in finding forever after and getting to continue her exploration of the world. However, it was what happened right at the end that wrapped this story up wonderfully, as it gives Ms. Torres an opening for future books. I would recommend Beneath the Surface by Reina Torres, if you enjoy paranormal romance or books by authors Celia Kyle, T.S Joyce, Eliza Gayle and Georgette St. Clair.

BLURB
The last thing Grace wanted to do was form attachments. Travis was looking for a new hometown, but the minute he met her… he knew that home wasn’t a place, it was her. He just had to convince her that what they have was worth sticking around for.

Grace Howard was excited to return to her childhood home in Grayslake, Georgia to visit her Aunt and Uncle. Living in the Arizona desert, watching her mom’s long line of boyfriends come and go, she has always dreamed of returning to the sultry days and balmy nights for one last visit before she sets off to see the world and forge her own future far away from relationships. Grace knows that forever doesn’t happen, not to her, and living in one place would be an exercise in frustration.

Travis Owen was looking for a home. Struggling with the clan politics in his hometown, he’s looking for somewhere to settle. Waiting to meet the Itan of Grayslake, he sees a curvy beauty get off the bus with a suitcase in tow. Both sides of him took notice, but he breaks a rule and there’s a price he’ll have to pay. Travis has to decide what’s more important to him, his instinctual need for this woman, or keeping his hide intact. With his bear riding him hard, he finds out that the dominant power in his life just might not be the command of an Itan, it just might be his heart.

Can Travis convince Grace that the adventure she craves is a life with him, or will she leave him when he needs her the most?