REVIEW: FLY AWAY WITH ME by SUSAN FOX 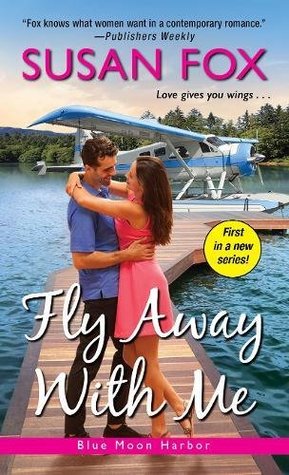 In Fly Away with Me (Blue Moon Harbor #1) by Susan Fox, after all her ailing mother's been through, Eden Blaire is determined to find her long-lost aunt; a woman that once had ties to a commune on the Pacific Northwest island she's travelling to. Luckily, she's broken things off with her long-time boyfriend and she doesn't have to worry about anything interfering with her search, especially not a man demanding her attention and taking it away from her mission. However, she never expected to meet Aaron Gabriel, a man with ties to the island and who doesn't believe in happy ever after. Will the week they spend together be enough, or will Aaron realize that happy ever after is possible for him?

Ms. Fox has penned a delightful read in this first story of her Blue Moon Harbor series, encompassing wonderful main characters that have so much to overcome to be together; an array of eccentric secondary characters that had me hoping that they'd have the information Eden needed to find her long-lost aunt; and dialogue that had me charmed by the hero and his determination to show the heroine that she needs to have fun. The way this story started had me liking the heroine immediately, because of her determination to do everything she can to help her mom through the tough times she's been through lately, and if that means trying to find her long-long aunt than that's what she's going to do. Will she be successful?

The dialogue was well-written, compelling and I enjoyed the journey the hero and heroine took to their happy ever after. Both have a love for family and are willing to do anything for their loved ones, even though the hero feels like he's failing sometimes when it comes to his troubled sister. Will he finally find a way to help her and get her to accept the help he offers? Moreover, the heroine is resilient, brave and I liked how determined she was to find her long-lost aunt, even though Aaron is a major distraction. I also liked how the heroine was willing to accept help from the hero, because she really needed someone on her side, if she was to be successful in her pursuit.

While the hero, he's been through a lot in his life. He was always in trouble growing up and I liked that he managed to turn his life around. Certainly, he surprises the heroine when she realizes all that he has accomplished and that he's not the carefree, laid-back island guy she believes him to be. I also liked how kind and caring he was to the heroine's situation and how much he helps the heroine. It's palpable the people on the island love or respect the hero, so why wouldn't they want to help.

Overall, Ms. Fox has delivered a worthwhile read in this book where the chemistry between this couple was strong; the romance full of passion and had me hoping the hero and heroine would be able to overcome their biggest obstacle of all -- the fact that they live so far away from each other; and the ending had me glad that everything worked out for the best with the heroine getting to have the best of both worlds -- her family close by and her forever after with Aaron. Certainly, her aunt had the best of plans. I would recommend Fly Away with Me by Susan Fox, if you enjoy island romances, the opposites attract trope or books by authors Stacy Finz, Melissa West, Donna Kauffman and Catherine Anderson.

For busy lawyer Eden Blaine, a trip to a Pacific Northwest island she's never even heard of is far from a vacation. Eden's ailing mother has tasked her with finding her long-lost aunt, who once had ties to a commune on the island. Still reeling from a breakup with her longtime boyfriend, romance is the last thing Eden is looking for. But her gorgeous seaplane pilot has her wondering if a carefree rebound fling is exactly what she needs.

Aaron Gabriel has no illusions about happily ever after. His troubled childhood made sure of that. But he does appreciate a pretty woman's company, and Eden is the exact combination of smart and sexy that turns him on. Still, as he helps her search for her missing aunt, the casual relationship he imagined quickly becomes something much more passionate--and much harder to give up. Can two people determined to ignore romance recognize that their heated connection is the kind of love destined to last?