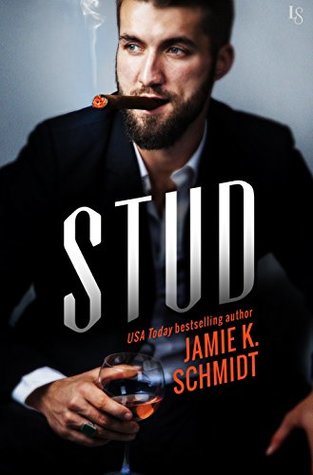 In Stud by Jamie K. Schmidt, Terri Cooke only just manages to bite her tongue every time Mick Wentworth walks into the coffee shop where she works to get his regular order. However, the more she gets to know Mick after he asks her out, the more of him she wants to see. Yet, when she finds herself working for his family's marketing firm to help him impress a new client, Mick decides they need to keep things professional. But that's easier said than done, especially when they're spending so much time together. Will Terri be able to win Mick's heart, or will his family drama put their happy ever after in jeopardy?

I always love reading one of Ms. Schmidt's books, and this story was an extremely hot and wonderful read from start to finish due to the explosive chemistry between this couple, which is instant from the moment they come face-to-face for the first time in this story; Mick's family drama that makes me feel sorry for him, because his family are horrible; and the dialogue, which was the perfect blend of intense moments and teasing banter that had me loving the hero, even though he comes off as an arrogant ad executive that thinks he can have anything he wants.

Both the main characters were riveting and I loved their back stories, of which made me sympathize with both their situations. Such as Mick's family drama that illustrates how dysfunctional they are and how determined everyone is to blame Mick for their problems; and what's happening with the heroine's brother that makes her want to be there for him. Will Mick come out on top against those that are determined to bring him down? Will his brother finally do the right thing? Moreover, the heroine is resilient, courageous and I liked how determined she was to help her brother through the tough time he's facing. It isn't easy and I couldn't help but feel sorry for her brother, because he used to be so independent and outgoing and now he's struggling to do things for himself. I also liked how she helped Mick with the account and that she showed him how good the gaming industry can be.

While the hero, he's arrogant, hard-working and I liked how determined he was to turn his family's company around after the scandal, although Mick and his team had managed to keep the details from being exposed. I also liked how Mick did his best to resist the heroine once they began to work alongside each other. No way was he going to allow another scandal to rock his family's company. Yet, what I liked most of all about the hero is how he dealt with his family and didn't allow them to get to him too much, even though they're determined to turn his life upside down. Certainly, Mick's mother has got a vindictive streak and is determined to do whatever it takes to bring the hero down.

Overall, Ms. Schmidt has delivered a really good read in this book where the chemistry and romance was explosive due to the hero's dirty talking and the heroine's ability to challenge the hero, especially in the moment when they met. Just because other women fall all over him, it does not mean that Terri is determined to do the same, especially when he doesn't treat people all that nicely. The way this story ended had me worried for one of the secondary characters and how what happened would have an effect on the hero and heroine. Will Terri be able to accept what Mick tells her? However, it was the epilogue that wrapped this story up wonderfully, as things are good for not only the hero and heroine, but also the heroine's brother. I also liked how Mick's family drama worked out for the better when it came to him and his father's relationship. It was just too bad Mick's mother didn't suffer the same fate as his father, although it -- at least -- seemed the hero's father was repentant for everything he did. I would recommend Stud by Jamie K. Schmidt, if you enjoy the enemy to lovers trope; office romances; or books by authors Sidney Bristol, Jessica Lemmon, Kelly Jamieson and Meredith A. Walters.

BLURB
When the barista next door teams up with a slick ad executive in this sweet standalone novel from USA Today bestselling author Jamie K. Schmidt, they both get a taste of unexpected love.

Terri Cooke wishes she could give Mick Wentworth a piece of her mind. The infuriating stud muffin walks into her coffee shop every morning expecting his regular order at 8:57 on the dot, without ever acknowledging Terri’s presence—except for staring at her cleavage. And yet she can’t deny that Mick Wentworth has an animal magnetism that’s stronger and richer than any espresso . . . which explains why Terri says yes when he suddenly, inexplicably asks her out.

After the morning coffee run, Mick’s day is all downhill from there. His family’s marketing firm is dysfunctional in more ways than one, so to save the business, Mick desperately needs to impress their newest client. When he learns that Terri’s a fan of their trendy product, he tries to get inside her head. It doesn’t hurt that she’s the barista he’s been lusting after for the past five months. But as things heat up with Terri, Mick finds that a little steam is just the jolt he needs to turn his whole life around?