REVIEW: TWO DUKES AND A LADY by LORNA JAMES 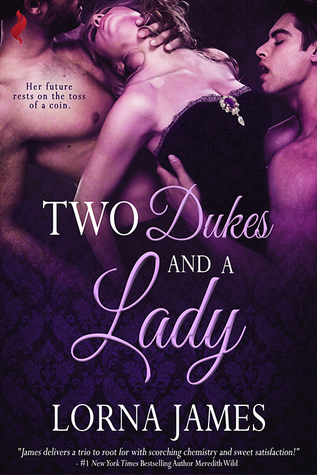 In Two Dukes and a Lady by Lorna James, Lillian Drew has returned home to England after the loss of her husband. However, she's faced with paying back her husband's creditors and without any money to her name, she realizes she has no other choice but to marry, if she's to have any chance of paying off the debt. Yet, choosing between her two childhood crushes is harder than she thought. But when they tell her she doesn't have to choose, will she give Charles and William a chance or will the fear of a scandal have her running from the chance of them all finding their happy ever after?

The two authors that bring their writing brilliance to the pseudonym of Ms. James have penned a super steamy and wonderful read in this novella where the pages flew by due to the fantastic main characters that had me hoping everything would work out for the best for the heroine and her two men; the dilemma the heroine faces because of her late husband's bad choices; the scandal Lillian would be associated with if anyone discovered the truth about her relationship with two men; and the wonderful blend of intense moments and playful banter between the main characters that had me loving the two heroes, even when they're being unapologetically crass and self-centered. The way this story started had me liking the two dukes, as they're determined to win Lily over, even knowing she might not be open to their plan to share her. Will she ever be able to accept their need to share women?

As for the dialogue, it was entertaining due to the main characters back stories and the obstacles they face to be together. Such as the scandal they face if someone discovers the truth about Lillian being with the two men; the jealousy of a woman determined to make the heroine see how bad she is for the men's friendship; and the moment she discovers another of her late husband's deceptions that could have an effect on her future happiness. What choice will Lillian make? However, I also liked how the men won the heroine over, even though it didn't seem all that hard, considering the feelings Lillian once had for the pair.

All three of the main characters were fascinating and I loved their back stories. Each have their reasons for avoiding a scandal, but most especially Lillian and Charles; as Lillian is a widow and it isn't appropriate for a woman in her time period to be with two men while Charles, his brother would do anything to have something to hold over his head. Moreover, the heroine is strong and brave in taking a chance, even though her being with William and Charles could backfire and bring her more trouble than what she's facing due to her late husband. I also liked the decision she made towards the end, as she couldn't abandon someone that needed her help. While the men, I liked the close friendship they shared, although being with Lillian could make or break the friendship, if they couldn't see eye-to-eye and treat the relationship like any other with the added bonus of love. I also liked how charming the men could be when it came to showing Lillian that being together was right.

Overall, Ms. James (a pseudonym for Jamie K. Schmidt and Lori Perkins) has penned a delightful read in this book where the chemistry between Lillian and the men was powerful, the romance fan-your-face hot, and the ending had me loving how the men won Lillian back, because there was no way they were going to let her go. Who knew the men could be so convincing? Not that it took a lot, considering how much Lillian loved the two men. I also liked the decision they made towards the end, as it allowed both men to have a place in the heroine's life without anyone questioning why William would be around Lillian so much. I would recommend Two Dukes and a Lady by Lorna James, if you enjoy steamy Historical Romance, the friends to lovers trope, or books by authors Stacy Reid, Jess Michaels, Samantha Holt and Tina Gabrielle. I would also recommend reading books by the authors that make up the Lorna James pen name.

BLURB
Charles Ashdown, Duke of Densmore, and his closest friend William Kenwood, Duke of Tennison, love gambling and womanizing too much to ever be ensnared by a debutante. Certainly, no decent wife would allow the debauchery they enjoy. But the only woman they’ve ever loved has returned. Unfortunately, Society, and likely darling Lily, will never accept the sharing relationship they’d like to propose.

Lillian Drew returns to England after her husband’s mysterious death and finds solace with her girlhood crushes, Charles and William. Sure, they’re as unapologetically crass and self-centered as always, but she loves them both. When her dead husband’s creditors come after her, she has no choice but to remarry, though she can’t make up her mind which duke she’ll propose to. With a toss of one of the few coins she has left to her name, she hopes the loser will understand.