REVIEW: UNDER FIRE by SCARLETT COLE 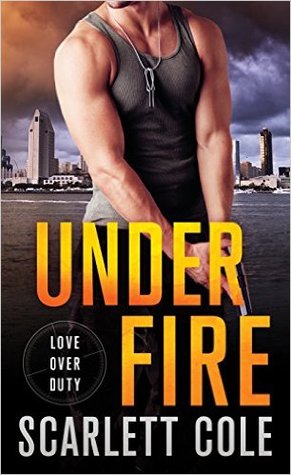 In Under Fire (Love over Duty #1) by Scarlett Cole, Former SEAL Sixton 'Six' Rapp is now the owner along with his Navy "brothers" of a security firm that offer services from being a bodyguard to solving kidnapping cases. But when Dr. Louisa North, the intriguing woman he's recently met comes to him with a problem, Sixton finds it hard to turn her away, even though her problem isn't one the firm is equipped to handle just yet. Will Sixton and his brothers be able to help Louisa, or will the dangerous situation she finds herself being drawn into further stop the pair from achieving happy ever after?

This is the first book I've read by Ms. Cole, but it surely has me wanting to read more of her work, especially any books to come for this series, as the secondary characters in Six's Navy brothers were intriguing. They've been through so much together with many decisions for their career and future centred around honoring the death of a good friend. Is their decision to leave the military and start their own security firm the right decision?

As for the dialogue, it was well-written, compelling and I loved the combination of action and suspense, as Six is determined to help Louisa find out what's going on at the lab where she works and protect her from the people that want to hurt her for their own gain. Will Six be able to keep her safe? Will Louisa and Six be able to discover who the people are after her before things become too dangerous? Furthermore, the main characters had me completely fascinated by their back stories and their growing relationship, as the heroine finds it hard to be around people and interact with them. Yet, Six is different because he has his own worries in being in situations that take him back to his time in the military. I also like how resilient and courageous the heroine was in making sure the hero and his Navy brothers didn't shut her out in their investigation and that she challenged him to discover all she could to keep herself safe.

While the hero, he's done well for himself in his military career and I enjoyed learning all about his back story, which readers are introduced to right from the beginning. Leaving the military was the right decision for he and his friends, especially with what happened to them, and I liked how determined they were to succeed in their new endeavor of opening up a security firm. I also liked how confident the hero was in his ability to keep the heroine safe and how far he was willing to go for Louisa, because she's different to the women he normally goes for, which is something his friends need to realize.

Overall, Ms. Cole has delivered a thrilling and sizzling read in this book, which entertained me from start to finish due to the strong chemistry between this couple that brings them closer and closer together; a wonderful array of characters in both the main and secondary ones; intense dialogue that had me riveted and wanting to discover what the main characters would go through on their journey to happy ever after; and the ending which had me on the edge-of-my-seat, because of what the hero and heroine face. Will the bad guys win or will Six and Louisa come out on top? However, I liked how things turned out for this couple in the end and how far they've come in their relationship. I would recommend Under Fire by Scarlett Cole, if you enjoy romantic suspense or books by authors Rebecca Yarros, Cherrie Lynn, Kelly Elliott and Bella Jewel.

BLURB
HE CAN TAKE THE HEAT.

Hot, hard-bodied Sixten Rapp is a former SEAL who’s raring to begin his brand-new civilian life. He and his Navy “brothers” start a security firm that offers the kind of services only a team of military-trained professionals can provide. But nothing prepared Six for his new client: an innocent woman on a mission to improve thousands of lives. . . unless someone takes hers first.
CAN SHE HANDLE THE FLAMES?

Dr. Louisa North knows time is against her as she tries to create a “miracle” medical treatment for a disease with no known cure, until she creates a sample so powerful that the wrong people want to use it as a chemical weapon. At first, Six is unwilling to accept Louisa as his client. But soon he realizes that the danger is real and that there’s much more to this plain-Jane scientist…including a burning passion between them that neither of them can resist. And now that an enemy is on Louisa’s trail, Six will do whatever it takes to protect her—or die trying.