REVIEW: UNTIL YOU LOVED ME by BRENDA NOVAK 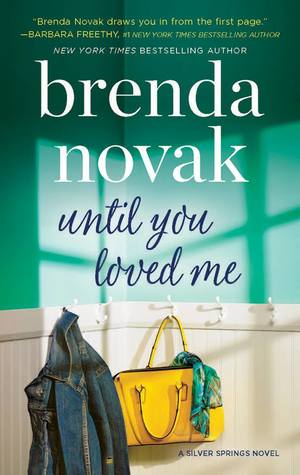 In Until You Loved Me (Silver Springs #3) by Brenda Novak, discovering her fiancé with another man has Ellie slipping her usual straight-laced self and embracing her wild side by having a one-night stand. However, when she soon after that night discovers she's pregnant, she never imagined not knowing the guy's full name would be a bad thing. Yet, when Ellie learns the truth, will she be able to give Hudson King a chance, or will his fame as a professional football player stop her from ever giving him a chance?

This series just keeps getting better and better with every book, and this story is the best so far due to the main characters back stories that leave them wary of love; the intense dialogue that had me sympathizing with the hero and heroine because of all that they've been through in the past; and the tough obstacles these two have to overcome to achieve their happy ever after including someone that is determined to manipulate the hero for their own gain. The way this story started had me really liking the heroine because she's brave in being able to put herself back out there again, even if she's only looking for a one-night stand.

As for the dialogue, it was very entertaining due to what's happening with the hero when it comes to his past; the pressure the heroine is facing from her ex when it comes to his new relationship and whether they can move past what happened between them; and the challenges these two face such as Hudson's accusations and whether they can find a way to deal with the fact that they're going to be parents. Will Hudson be able to convince Ellie that they can make things work between them? Will Ellie be able to help Hudson overcome his past and show him how good loving someone can be?

Both the hero and heroine were fantastic and well-developed characters, and I loved every moment they conversed to win each other's trust and overcome their pasts to find their happy ever after. Both aren't looking for a relationship, especially since loving someone can lead to hurt and I could understand their reasons because Hudson has never known love and Ellie was betrayed by someone she loved. Yet, Ellie is strong and brave by giving Hudson a chance and I liked how determined she was to help Hudson when it came to his past. I also liked how her need to find answers as a scientist comes into play when it comes to discovering things about Hudson's past, which is proven by her determination to learn the truth. Will the people trying to manipulate or take advantage of the hero because he's a popular football player with lots of money win?

While the hero, he's been through so much in his life and I sympathized with him. However, he's been lucky to have the people he does in his life in the secondary characters. I also liked how kind and caring he is, and all that he has accomplished as a professional football player both on and off the field. The people he helps as a mentor to some of the secondary characters, especially Aaron, just had me loving Hudson more than I already did. The friendship he has with Aaron and the way the young man can tease Hudson about the way he plays football had me smiling.

Overall, Ms. Novak has penned another wonderful read in this book where the chemistry was strong between this couple, the romance nicely-detailed, and the story tugged at my heart-strings when it came to the hero's point-of-view and how he's overcome his past to be the man he is. The way this story ended had me so happy for this couple, as they are so deserving of their happy ever after. The heroine is so determined to prove to Hudson that she's not going anywhere. That she's there for him through thick and thin. However, it was the epilogue that wrapped this story up perfectly, as we discover how everything turned out with the people determined to try and hurt Hudson because of his past; and readers discover how parenthood suits Hudson. He is going to be a great dad. I would recommend Until You Loved Me by Brenda Novak, if you enjoy the second chance romance trope, the opposites attract trope or books by authors Marie Force, Susan Mallery, Barbara Freethy and Jill Shalvis.

BLURB
Sometimes starting over means finding everything you’ve been missing…

After catching her fiancé cheating — with another man — usually straitlaced, workaholic scientist Ellie Fisher liberates her wild side just long enough to indulge in a passionate one-night stand with a tall, dark stranger she meets at a trendy Miami bar. Embarrassed by her recklessness, she ducks out the following morning without learning the guy’s full name, something that shouldn’t have been a problem…until a pregnancy test turns positive.

Being a professional football player, Hudson King has always been cautious around women. But this one had been different — so disinterested in his celebrity, so convincingly into him. When Ellie tracks him down, claiming she’s carrying his baby, he’s stunned. And more than a little betrayed.

But after growing up as an orphan, he’ll do anything to stay involved in his child’s life, so he urges Ellie to move to Silver Springs, where they can co-parent. Hudson has a lot of love to give, certainly enough for his child, and when their initial spark reignites, perhaps for Ellie, too…