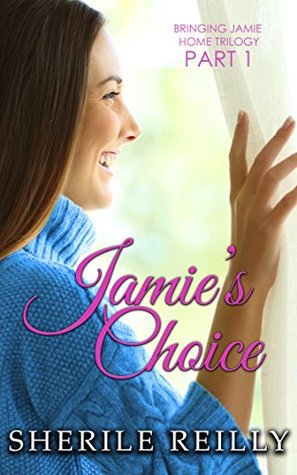 In Jamie's Choice (Bringing Jamie Home #1) by Sherile Reilly, Rachel McGivney finds it hard to say no to her high school crush, Garrett Yates, even though they haven't seen each other in years. But the responsibility of taking on rambunctious nine-year-old orphan, Jamie Sorenson, and his sheep dog isn't one she's ready for. However, once she makes the decision to take the young boy, will she be able to show him the love he deserves, or will Rachel find it too hard to take care of Jamie and give up any chance of a future with Garrett?

This story starts off this trilogy exceptionally well, and it's a story where I liked the heroine immediately, because of her reaction to Jamie and what he's doing. Is there any way she can get him to understand how much her garden means to her? However, I really enjoyed this story, because of the tough decisions Rachel has to make; her kindness towards the secondary characters, even though she has every right to tell them to keep their opinions to themselves because her choices should be her own, instead of feeling pressured by everyone on what they feel is the right choice; and what happens towards the end that makes Rachel realize that Jamie being in her life is a good thing, as she knows she can show him the same love his mom gave him.

As for the dialogue, it was entertaining due to Rachel's interactions with the secondary characters, the challenges she faces with Jamie because she doesn't know how to deal with a child, and her growing relationship with Garrett as she's fairly innocent when it comes to men. Moreover, Rachel is strong, brave and I liked how she handled everything thrown at her. Jamie isn't an easy boy to deal with, especially because of the loss he's suffered and the fact that Rachel isn't the easiest person to deal with due to the rules she puts in place. Yet, in saying that, I liked the bond Rachel and Jamie had by the end of this book. Since he's a young boy that deserves all the love in the world and certainly there's enough love to go around, not only from Rachel but from the secondary characters as well.

Overall, Ms. Reilly has penned a sweet and endearing read in this book where the chemistry between Rachel and Garrett was powerful and had me hoping that things would work out for the pair, as long as Garrett could understand that Rachel's decision about taking Jamie on had to be her decision and that she had the right to change her mind. He couldn't keep pressuring her when Rachel felt taken Jamie in was the wrong decision. The way this story ended had me concerned for one of the secondary characters. Will everything be all right? However, I liked how things turned out for Rachel and Jamie, as she realizes how important Jamie is for her life. I would recommend Jamie's Choice by Sherile Reilly, if you enjoy women's fiction or books by authors Daisy James, Liz Eeles and Kate Hewitt.

BLURB
No kids! No pets! No men!

It’s the perfect life for uptight thirty-seven-year-old Rachel McGivney, a career-woman who’s struggled for years to gain a foothold in business and keep her emotions under control.


When Garrett Yates, her high school crush and now a high-powered lawyer, returns to town and wants to foist Jamie Sorenson, a mischievous nine-year-old orphan and his aggravating sheep dog, on her, Rachel rebels.

She doesn’t want the kid or his dog, and she’s definitely not ready to be Jamie’s guardian. That would open up too many sad memories of a time when she was involved in a disastrous event, involving another young child.

To complicate matters, Garrett’s presence reminds Rachel of unrequited love. Handsome and persistent, Garrett believes in Rachel and trusts her to be the right person for Jamie.


But can Rachel learn to trust herself?