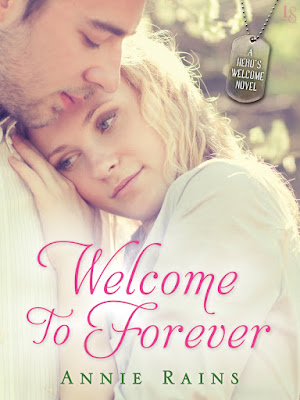 Micah Peterson is very protective of his son, Ben, and only wants what is best for him. Teaching him to be independent is important, especially for a child relegated -- more and more -- to a wheelchair. He can't help confronting those that give Ben special treatment, and the principal at his kid's new school is the first person he's determined to give a talking-to, for treating Ben differently than her other students.
It's not easy for Kat Chandler to live in Seaside, a small town full of Marines and their kids. However, she can't up and leave. Not after recently being appointed principal of the local Elementary school. Determined to do what is best for her students, she finds herself introducing new and improved ways of dealing with the delinquents. Even knowing there are parents bound to be opposed to her methods. Yet, never once had she thought one would confront her over the kindness she shows his son.
What an incredible first book to start off Ms. Rains Hero's Welcome series, comprising a hero determined to make sure he gives his son the best out of life, and a heroine finally coming to the conclusion that she deserves to be happy again after losing someone she loved. The opening chapter certainly sets the fast-pace of the story, and the moment the hero and heroine meet is really good. As Kat finds herself dealing with her first bit of trouble at school.
I really liked Kat and Micah. Both of their back stories are compelling, and are definitely what makes some of the dialogue quite intense. They face some tough obstacles that made this book an absolute page turner. Such as the fact that Micah is a Marine and Kat has sworn off military men, Micah's dad and his controlling ways when it comes to the hero's career in the military and the trouble Kat faces at the school that puts her at odds with a student's father. However, there are plenty of fun moments between Kat and Micah, especially with Ben determined to bring them together because he wants his dad to be happy.
Kat is strong and brave in the way she's determined to give Micah a chance despite the fact that she lost someone close to her to the same career as he has. She's also very benevolent because, of what she's doing with her students. Her idea of detention is certainly a fun one, although the kids don't think so -- at first. While Micah, I liked how protective he was of Ben, and that he was determined to give his son the best life he could as a single parent. He's also very good for Kat, as she comes to realize that it's time to move on with her life.
This couple have really strong chemistry right from the moment they meet, and it only gets more intense every time they interact. Kat can't seem to resist Micah, although she's adamant with the fact that she wouldn't get involved with a military man again. Because she's already lost someone she loved to the dangers of such a career. Eventually though, their intense chemistry spills over onto the pages in some scorching sex scenes that do their chemistry justice.
Overall, Ms. Rains has impressed me with a book that encompassed strong dialogue, engaging characters and a plot that kept me entertained from start to finish. The ending wrapped this story up nicely, as Ben got his wish. Besides, no-one deserved a happy ever after more than Kat. I would recommend Welcome to Forever by Annie Rains, if you enjoy reading Kristan Higgins, Susan Mallery, or Jill Shalvis.
OVERALL RATING:

If you love Kristan Higgins, Susan Mallery, or Jill Shalvis, you won’t want to miss the Hero’s Welcome military romance series! Welcome to Forever introduces a small coastal town where America’s best and brightest risk everything for love.
In Seaside, North Carolina, there are two kinds of people: Marines, and kids of Marines. Then there’s Kat Chandler. Recently hired as the principal of Seaside Elementary, Kat makes it her mission to turn the school into a place of peace and calm. That’s not going to be easy with hard-liner parents like Micah Peterson storming in, telling her how to do her job—and then kissing her with those gorgeous lips of his and turning her brain into mush.
As a Marine Sergeant and a single dad, Micah Peterson has just two priorities: doing his job better than anyone else, and getting the absolute best for his son, Ben. But when he meets Ben’s beautiful new principal, a different yearning shifts into focus. He wants her, sure, but he’s also moved by the connection Kat forges with her students. So after learning that she refuses to date Marines, Micah sets two more objectives: convincing Kat to give him a chance . . . and then holding on to her forever.
Buy Links:  Amazon | B&N | Google Play | iTunes | Kobo

“Have you thought about that kiss?” she asked, as he leaned in close to fasten her seatbelt. She couldn’t control what was coming out of her mouth. “Because I have. A little.” She started laughing again. Val had warned her that she was a horrible drunk, and evidently, it was true.


“What have you thought about it?” he asked, his voice low and bristly. Her buckle snapped into place with a loud click. He could step back now, but he didn’t.

And she didn’t want him to. What was the point of being drunk if you couldn’t say and do what you wanted, and then apologize for it in the morning? No one blamed a drunk, they blamed the drink. “I thought that I liked it. The kiss. It was amazing.” She held her breath as he lingered in front of her, his hand still resting on the seat’s buckle.

“I thought the same thing.”

“You did?” She swallowed thickly, as her heart rode up her throat.

His brow lifted. “You sound surprised.”

“I’m out of practice.” She nibbled on her lower lip, drawing his gaze there. Then his gaze flicked back to her ring. Just the thought squashed the flutterings in her chest, leaving a deep ache that vibrated with the alcohol. “He’s been gone for two years,” she said.

Explaining about John in her state wasn’t a good idea, though. She might start crying, which she didn’t do in front of others anymore, and right now all she wanted to do was forget everything but their kiss. That she wanted to remember. “You could kiss me again,” she said softly.

His smile deepened and, damn, he smelled good.

Leaning in closer to her ear, his hot breath melted her as he whispered, “Kat, you’ve had too much to drink. I’m taking you home now.”

Before she could process what he’d said, he stepped back and shut the Jeep’s door, the sound as offensive as if someone had crashed cymbals in her ears. A moment later, he reappeared on the driver’s side and cranked the engine, another sound that made her wince.

She closed her eyes, unsure of what to do with her drunken emotions.

“If I kiss you again, I want to be one hundred percent sure it’s what you want. Not because my almost ex is walking up and you want to help me out. Not because you’ve had too much to drink and want to escape.”

She suddenly felt very tired, as the Jeep Cherokee headed out of the parking lot. “So, you are going to kiss me again?” she asked. Before she could hear his answer, though, her eyes closed and the sounds of the road and his voice, and the blood thundering in her head, blurred together. She remembered their kiss, the feel of his stubble roughly brushing against her cheek, and the way he had smelled like pine and fudge brownies.

No, wait. His eyes reminded her of fudge brownies. He didn’t smell like them.

Her eyes fluttered open. Yeah, she was definitely going to regret tonight in the morning.

ABOUT THE AUTHOR:
Annie Rains is a contemporary romance author who writes small town love stories set in fictional towns on the coast of North Carolina. Raised in one of America's largest military communities, Annie often features heroes who fight for their countries, while also fighting for a place to call home and a good woman to love. When Annie isn't writing, she's spending time with her husband and 3 children, or reading a book by one of her favorite authors. Represented by Sarah Younger at Nancy Yost Literary Agency (NYLA).