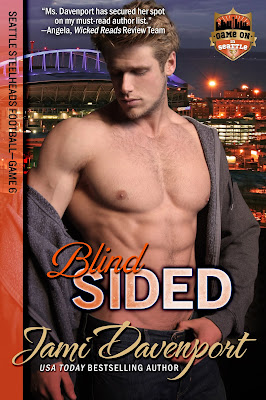 Blindsided
Game On in Seattle #6

USA Today Bestselling author Jami Davenport introduces the Seattle Steelheads football team with this sixth book in her Game On in Seattle sports romance series.
The daughter of one-time rock legends, Emma Maxwell is the good girl of the family, the dutiful sister, the doting aunt, and a dedicated employee in the family party-crashing business. Every Wednesday night at Karaoke, she indulges in her secret fantasy of being a singer. Yet the thrill of being on stage doesn't rival the thrill of a spontaneous liaison with the delectable, yet downtrodden, quarterback of the Seattle Steelheads, Tanner Wolfe, Emma’s long-time crush.
Tanner didn't see it coming--not any of it. He was blindsided--by his dysfunctional family, his plummeting career, and the one thing he least expected--by love. After photos with Emma go viral, Tanner is caught in a lie and tells a bigger one to get out of it. Now he’s shoulder-pads deep in a temporary marriage while struggling to resurrect his disastrous career and reunite his broken family. As time passes, Tanner begins to wonder if temporary is good enough, but he’s made a promise to Emma, one which has nothing to do with marriage vows and everything to do with her Nashville singing career and the end of their relationship.
Will Tanner and Emma take the ball and drive for the win, or will they be permanently relegated to the sidelines as the clock runs out on their temporary marriage?
Buy Links:  Amazon | B & N | iTunes | Kobo | Smashwords
EXCERPT:
“Whose idiot idea was it for us to come to the casino on karaoke night?” Tanner groused. He’d already lost too much money playing a couple rounds of blackjack so gambling was out but so was calling it a night. Tanner didn’t want to go home either.
“Yours,” Hunter, Cam, and Grady answered at the same time.
“Oh,” Tanner sighed and studied the bar menu, suddenly hungry.
“Hey,” Grady tugged on his sleeve and pointed with his finger, “isn’t that your brother’s fiancée?”
Tanner snapped his head around so fast he almost got whiplash. The lady in question stood on a dark stage under a spotlight, a microphone grasped in her hand. Rubbing the back of his neck, Tanner squinted into the lights of the small stage.
“Holy crap,” he said under his breath. His dick hardened in record time. The woman in question wore a tight pink top showing a liberal amount of tasty cleavage and a swishy, mid-thigh skirt. Her honey blond hair spilled over her shoulders and down her back. A very nice back and even nicer ass, he noted, as she bent down to pick up the mic. She wasn’t tall, but she was just his size with those long, long legs which stretched to heaven and back.
All kinds of wicked scenarios designed to piss off his brother played through his mind. He couldn’t imagine why Avery would be here dressed like that without his overbearing ass of a brother stuck to her side. They must have had a fight. Maybe they broke up, making her ripe for rebound sex. Or maybe—
Tanner frowned. Something wasn’t quite right.
“Shit,” he swore under his breath. Tanner noticed details, a talent which had made him an elite college quarterback able to read defenses with a glance. Sadly, that particular talent hadn’t helped him in the pros—yet.
No, that delectable vixen on stage wasn’t Avery, but Emma, the sweet twin sister. Tanner leaned forward and licked his lips. Emma? Dressed like that?
Damn, she was the hottest woman in here.
He shook his head, pretty sure the world might be coming to an end any minute. Considering Izzy was one of his closest friends, he knew the sisters pretty well and Bella really well; actually maybe too well because his brief involvement with Bella had created tension between Izzy and him. He hated that.
Tanner watched mesmerized as usually quiet, buttoned-up Emma morphed into a hot, sultry siren. She sang and danced on stage like a pro, reminding him she’d been raised with music in her life because of her parents’ status as two-hit wonders. Emma’s party-crashing side job most likely contributed to her stage presence. In their teens, the sisters had literally sung for their supper by crashing parties in order to get their next meal. They were so good at taking a dud party and turning it into a success, they started a party crashing business, which he understood was becoming quite lucrative.
Hell, he’d even paid them to crash one of his parties—yet he’d never noticed Emma in stage mode before, maybe because he’d been too busy screwing Bella in a closet.
He ran his hand through his hair and groaned. He noticed her now, and he was torn between covering her up with his jacket and taking off the clothes she had on. 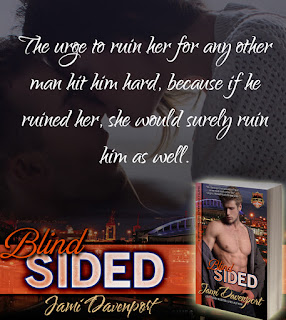 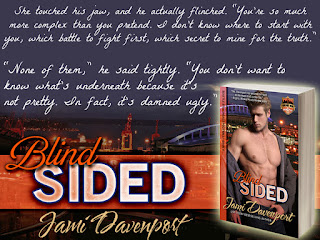 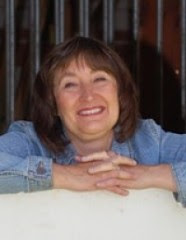 ABOUT THE AUTHOR:
USA Today Bestselling Author Jami Davenport writes sexy contemporary and sports romances, including her two new indie endeavors: the Game On in Seattle Series and the Madrona Island Series. Jami lives on a small farm near Puget Sound with her Green Beret-turned-plumber husband, a Newfoundland cross with a tennis ball fetish, a prince disguised as an orange tabby cat, and an opinionated Hanoverian mare. She works in computer support in her day job and juggles too many balls, but she wouldn't have it any other way.