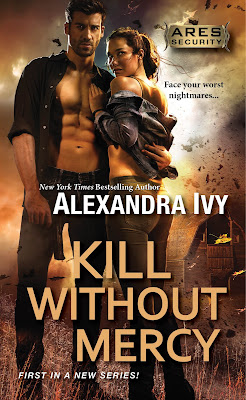 In Kill Without Mercy (ARES Security #1) by Alexandra Ivy, after surviving and escaping one of the toughest experiences of his life, Rafe Vargas and his four friends have decided to start their own security firm. With their various areas of expertise, they can make it a success. But first, he needs to attend to family business by cleaning out his grandfather's house. However, meeting Annie White makes his plans of going to Newton, Iowa, cleaning out his grandfathers house, and returning to Texas immediately impossible.
Returning to Newton, Iowa, is the last thing Annie White should be doing, but she can't help it. She's haunted by her past and needs answers, especially when it seems the monster that killed seven women fifteen years ago is at it again. Even though the man police arrested was killed while in police custody. Some people are happy to see her, others not so much. Still, she can't trust anyone. Except perhaps, the enigmatic stranger in town with the lethal smile that's determined to help her.

What an exciting, fast-paced, attention-grabbing read this first book in Ms. Ivy's new romantic suspense series was, encompassing the mysterious strangers trope, a heroine determined to discover answers to the past, and a hero determined to help her. I really enjoyed how this story started with its prologue, as it introduced me to Rafe's past and how he'd come to be so close to the men he works with.

The dialogue was powerful due to both characters back stories, the investigation into the missing women in Newton, the notes and gifts the heroine receives, and what the bad guy does to both Rafe and Annie. However, there were some light-hearted moments that had me smiling or laughing. Moments between Rafe and Annie where he's determined to get her to trust him, or between Rafe and his friends where they enjoy yanking each other's chains -- so to speak. Really, I was anticipating the moments when Rafe and Teagan conversed, as he was a great secondary character.

I loved the array of characters in this book. Each of them was well-crafted and kept me entertained from start to finish. Annie is strong, brave, tenacious. She's determined to find the missing women, and hopefully put the past to rest. However, it isn't easy for her, as she learns that most of her life is a lie. That things she believed happened didn't happen at all, or the one person she trusted most -- her father -- was hiding things from her. It seemed the shocks just kept on coming for Annie, and how she managed to remain so resilient was fantastic.

While Rafe, he's good for Annie. She needs someone she can trust after everything she's been through in her life. The way he's so protective of her from the moment he meets her was endearing, especially since Annie connects to the killer/kidnapper through a series of visions that no-one has ever believed her about.

As for the secondary characters, I loved the four men Rafe is close to. They've been through so much together, and would do anything for each other. The way they worry about Rafe, believing he's getting in too deep with Annie was quite touching. But the more they see Rafe interact with Annie, they see that for him, she's his future. So, what else can they do but help Rafe with the investigation.

Overall, this was a very good book that included some scorching sex scenes that did the couple's intense chemistry justice. And as for the ending, it was perfect. Throughout the story, Annie is unsure about what the future holds for her and Rafe, but after what she endures at the hands of a pair of mad men and the answers she discovers about her past make her see how right they are for each other. Besides, the way the other men welcomed her into their family had me cheering for Rafe and Annie. I would recommend Kill Without Mercy, if you enjoy romantic suspense, or stories with engaging characters that will keep a reader hooked right to the end.

BLURB:
From the hellhole of a Taliban prison to sweet freedom, five brave military heroes have made it home—and they’re ready to take on the civilian missions no one else can. Individually they’re intimidating. Together they’re invincible. They’re the men of ARES Security.


Rafe Vargas is only in Newton, Iowa, to clear out his late grandfather’s small house. As the covert ops specialist for ARES Security, he's eager to get back to his new life in Texas. But when he crosses paths with Annie White, a haunted beauty with skeletons in her closet, he can't just walk away—not when she’s clearly in danger…
There’s a mysterious serial killer on the loose with a link to Annie’s dark past. And the closer he gets, the deeper Rafe’s instinct to protect kicks in. But even with his considerable skill, Annie’s courage, and his ARES buddies behind him, the slaying won’t stop. Now it’s only a matter of time before Annie’s next—unless they can unravel a history of deadly lies that won’t be buried.
“A fantastic blend of romance and suspense…thrilling to the end.” --Mary Burton, USA Today bestselling author
Buy Links:  Amazon | B & N | Google Play | iTunes | Kobo

Her thought was interrupted as she kicked a small object that had been left in the middle of the floor.


Automatically glancing down she came to a sharp halt, her breath locked in her chest as she leaned over to pick up the small doll with the mass of tangled blond hair. 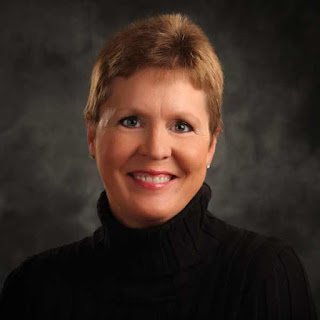 ABOUT THE AUTHOR:
ALEXANDRA IVY graduated from Truman University with a degree in theatre before deciding she preferred to bring her characters to life on paper rather than stage. She currently lives in Missouri with her extraordinarily patient husband and teenage sons. To stay updated on Alexandra’s Guardian series or to chat with other readers, please visit her website at www.alexandraivy.com.