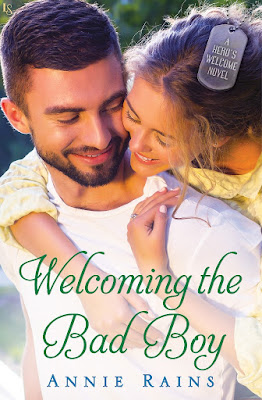 Griffin Black has too much to deal with. Worrying about his mom and her illness and trying to train his new K-9 partner should be enough to keep him pre-occupied, however it seems thoughts of Valerie are taking over his brain. Helping the gorgeous woman to train an unruly puppy is no problem at all, especially when it gives Griffin a chance to spend time with her. Can he convince her that happy ever after is possible outside of her stories?
Having absolutely loved the first two books of this series, I couldn't wait to read Val's and Griffin's story, and I've got to say that it does not disappoint. Right from the beginning, this story was riveting, fast-paced and I loved how the hero and heroine came face-to-face for the first time. Would Griffin react badly to her recklessness?
As for the dialogue it was intense due to the main characters back stories, what's going on with Griffin's mom; what's going on with Val and her writing; and the various situations the hero comes up against in his job. Will Griffin be able to train his dog before the eager pup ends up seriously hurting someone? Will the hero be able to handle the changes his mother is going through? Will Val be able to overcome her writer's block? However, there were some light-hearted moments that made me smile. The old ladies that Val interacts with are delightful, and prove that Val is a good woman that brings joy to their lives.

I really liked both the main characters as well as the secondary ones. I couldn't help feel sorry for both Griffin and Val, and found it was hard not to get emotional with what's happening with Griffin's mother. He has so much guilt about what transpired between him and his mother a while back and I was eager to know whether he'd be able to forgive himself for how he acted. Moreover, Val is a godsend when it comes to his mother. She helps the woman immensely with her kindness.

Val is strong, brave and I liked how she's determined to bring happiness to those that need some in their lives. What she does for the people in the local nursing home and how she helps her father with the various tasks he gives her proves how selfless she is. Furthermore, I felt sorry for her when it came to her father. It seems he's not all that happy with her unless she's doing something that he approves of. While Griffin, he's confident, brave and I liked how determined he was to make things right with his mother by being there for her, no matter how hard it was for him to be around her because of her illness. I also liked how he never gave up on his K-9 partner, even though the dog seemed like a lost cause when it came to its actions against bad guys.

Overall, this was an incredible book, which I believe is the best in this series so far. The strong romance between Griffin and Val illustrates how right these two are for each other and I loved how this story ended, as the hero isn't above being a little sneaky if it means Val hearing him out when it comes to making things right between them. Also, the final chapters as well as the epilogue wraps up this story perfectly with Val finally getting everything she deserves: a happy ever after with the right man, a better relationship with her father and everyone learning the truth about her writing career. I would recommend Welcoming the Bad Boy by Annie Rains, if you enjoy the opposites attract trope or stories encompassing military heroes. I would also recommend reading the other books of this series, as they're just as good as this one.

BLURB:
From the bestselling author of Welcome to Forever (“Full of heart and emotion!”—Lori Wilde) comes a sweet, sexy novel about breaking all the rules. In Seaside, North Carolina, the boys on the base are heroes—but that doesn’t mean they’re always well-behaved.
As a preacher’s daughter, Valerie Hunt only dates the very respectable, very boring men who meet her father’s strict standards. In private, however, she leads a double life as a romance writer of steamy stories about the least respectable sorts of men. Valerie has always kept her hottest fantasies separate from her real life, but when she nearly runs a hot-blooded biker off the road, the lines begin to blur.
Even though Valerie almost killed him, Griffin Black can’t be angry after he learns the reason for her distracted driving: an unruly puppy belonging to her ailing friend. As a member of the military police K-9 unit, Griffin insists on training the dog himself. But he soon wonders how he’s ever going to stay disciplined around the most alluring, down-to-earth, and totally unattainable woman he’s ever met. Valerie is the ultimate good girl. And Griffin is going to need all his old tricks to unleash her wild side.

“Damn.” He tipped her chin up with his index, looking at her with his dark molasses eyes. "I’m serious. I want to go out on a date tomorrow. No sex."
"No sex?" she asked.
“Just flowers and chocolates. And lots of kissing. Say yes to me,” he said, kissing her mouth again, making it impossible for her to tell him no.
“But there is more sex tonight, right?” she asked, moaning as he lowered his mouth to cover one breast.
“Say yes, Val,” he said, as the rough, unshaven edge of his jaw scraped against her skin, feeding her arousal.
“Yes,” she said through shortened breaths. “I say yes.”
He emitted a low laugh that tickled against her skin. Then he thrust himself inside her again, making up for the arrangement they’d just made for tomorrow. Making up for all the lonely nights she’d endured until this one. Making up for all the lonely nights she would endure after he was gone. 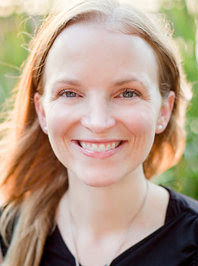 Annie Rains is a contemporary romance author who writes small town love stories set in fictional towns on the coast of North Carolina. Raised in one of America’s largest military communities, Annie often features heroes who fight for their countries, while also fighting for a place to call home and a good woman to love. When Annie isn’t writing, she’s spending time with her husband and 3 children, or reading a book by one of her favorite authors.
Author Links:  Website | Facebook | Twitter | GoodReads 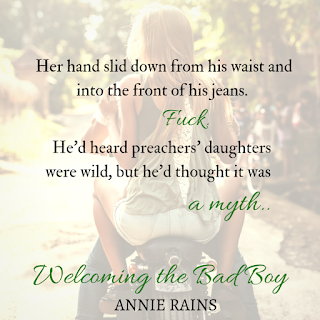 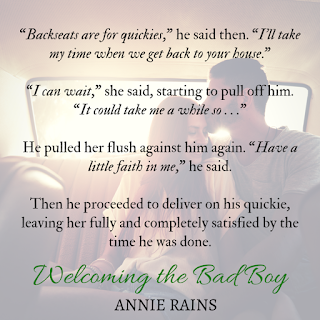