REVIEW & GIVEAWAY: A FOOL FOR YOU by KATEE ROBERT 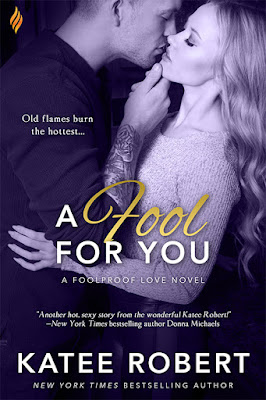 A Fool for You
Foolproof Love #3
By: Katee Robert
Releasing October 3, 2016
Entangled: Brazen
+ Add to Goodreads

While Daniel, he holds so much guilt inside of him that it was no wonder he liked to keep to himself. Why should he be happy when his good friend is no longer around and the hero believes he may have been responsible for his death? How can he be with Hope knowing that the night his good friend died also bought such devastation to her life as well? Especially when the evidence is staring him in the face every time he looks at her. I wasn't sure whether he could get over his guilt the more I read, but I was glad that he did. He needed to have sense knocked into him the way he did with a certain talk from someone important in Hope's life; a talk that made him realize that he needs to let go of the past, so he can have a second chance with Hope.

Overall, this was a really good book where the sex scenes were scorching and did justice to this couple's intense chemistry, which still blazed hot, if not hotter than it did thirteen years ago. The way this story ended was wonderful and brought tears to my eyes, because Daniel did a wonderful thing for Hope. His thoughtfulness and words definitely help to win her back, especially combined with his surprise of getting those that love her back, so they don't miss out on knowing their child. I would recommend A Fool for You by Katee Roberts, if you enjoy second chance romances.

BLURB:
It’s been thirteen years since Hope Moore left Devil’s Falls, land of sexy cowboys and bad memories. Back for the weekend, she has no intention of seeing the man she never got over…or the two of them getting down and dirty. It’s just a belated goodbye, right? No harm, no foul.

Until six weeks later, when her pregnancy test comes back positive…

Daniel Rodriguez hasn’t forgiven himself for how things went down with Hope all those years ago. He knows she’s better off without him, but when she shows up on his doorstep, panicking because she’s pregnant with his baby, he can’t help seeing it as a chance to make up for the past.

Hope shook her head. “You’re as much an idiot now as you were then.”

And then she kissed him.


It caught him a little off guard—he hadn’t expected her to be the one to make the first move, especially after the way the scene in the bathroom had gone down—but Daniel wasted no time taking control. He kissed down her neck, sliding his hands beneath her shirt and skating them up to her body to cup her breasts. They filled his palms, familiar and yet not, all at the same time. He cursed. “Gorgeous Darling, the things you do to me.” He nipped her collarbone. “I’m going to taste you, so if you’re going to change your mind, now’s the time to do it.”
Her only response was to shove her yoga pants down to her knees.
He lifted her onto the counter and disentangled her right leg from the pants so he could spread her fully. He stroked her thighs, pausing when his fingers met the scar. It brought up so many conflicting feelings in him. It was his fault that she had the damn thing, but that didn’t mean he thought of her as less, the way she seemed to think. She was as beautiful now as she’d been at eighteen, and more confident despite her injury. Or maybe because of it. He had no idea.
All he knew was that at some point he was going to have to get up close and personal with her healed injury, and he was going to have to tread very, very carefully to avoid burning what was left of the bridge between him and Hope.
“If you apologize, I might actually kick you.”
That snapped him out of it. As much as he wanted Hope, he had an ulterior motive for pushing her now. All getting distracted by her leg was going to do was fuck up his chance of convincing her to stay, in his house and in his bed. He jerked her to the edge of the counter, spreading her thighs wider. “Don’t scream. You’ll upset Ollie.”
And then he did what he’d been fantasizing about ever since he walked out of her life. Daniel dipped his head and gave her center one long lick. She tasted better than he remembered, her body already shaking for him, so he used his thumbs to part her folds and licked her again, reacquainting himself with every inch of her.
“Oh.”
He looked up her body to find her head thrown back and her chest rising and falling with each harsh breath. “Take off your shirt.”
Hope wasted no time obeying, dragging the material over her head and tossing it away. And then there was nothing hiding her body from his gaze. He licked her again, savoring the way she shook. A tattoo curling around the bottom of her ribs caught his eye, but he was too distracted to read it.
He was tired of teasing her. He wanted to feel her orgasm again, to know she was coming apart at the seams because of him. Daniel sucked her clit into his mouth, stroking the sensitive little nub with the flat of his tongue the way she’d always loved. Sure enough, before he had a chance to truly savor her, Hope cried out his name and shuddered, her thighs squeezing his head as she came. He gentled his touches, licks turning to kisses, turning to the slightest brushing of his lips against her. Only when she stopped shaking did he raise his head. “Stay, at least until we figure out what we’re doing.” 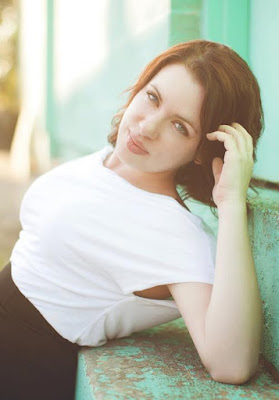 New York Times and USA TODAY bestselling author Katee Robert learned to tell her stories at her grandpa’s knee. She found romance novels at age twelve and they changed her life. When not writing sexy contemporary and romantic suspense, she spends her time playing imaginary games with her children, driving her husband batty with what-if questions, and planning for the inevitable zombie apocalypse.
Author Links:   Website | Facebook | Twitter | GoodReads