Enter to Win a print set of the first two Heartbreaker Bay novels,
SWEET LITTLE LIES and THE TROUBLE WITH MISTLETOE 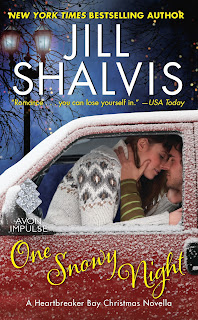 In One Snowy Night (Heartbreaker Bay #2.5) by Jill Shalvis, Rory Andrews is planning to see her family this Christmas for the first time in years. However, she has to survive the trip to Lake Tahoe first when Max Stanton offers her a ride. Will they finally be able to put their rocky past behind them, or will they both let a chance at forever slip by?

Max Stanton has done a good job of fighting his feelings for Rory, especially since he blames her for an incident that cost him a lot when it came to furthering his education. But now he's done fighting his feelings, and willing to fight for a chance with her. Offering to give her a lift home to Lake Tahoe is the perfect opportunity to discover whether she feels the same way. Can he convince her to give a relationship between them a chance?

Ms. Shalvis has penned a novella that gripped my attention immediately, and had me turning the pages rather quickly to see how things would work out for Max and Rory because of their rocky past. Would Rory accept his offer of a ride? Can Max get over what Rory did in the past once she explains her reasons for doing what she did? Can Max convince Rory to give him a chance, especially when she believes she's no good at relationships? How would Rory handle things with her family when she hasn't seen them in years?

As for the dialogue, it was intense due to Rory and Max's rocky past and the reason why the heroine has avoided her family for so  long. She's never really felt a part of her family, not when her mother and step-father should have been standing up for her instead of not believing in her. Because of things some mean girl was doing to get her in trouble until she turned the tables on said mean girl. Possibly making her home situation worse by her parents reaction to what she did in the name of revenge. So, I could understand why she felt the need to escape and after everything she's been through, I found her quite remarkable.


I really like both the main characters, as well as the secondary ones (Well, Willa anyway). Since I wasn't thrilled by how the heroine's step-father treated her at first in the moment they finally came face-to-face. Rory is strong, brave and I liked how determined she is in facing her family. It's something she needs to do, even though she might not get a warm welcome. Also, I like how she's managed to move on from a horrible event in her past, and turned things around for herself. It wouldn't have been easy, because it's something she doesn't like to talk about, but I liked that she was willing to tell Max. While Max, he was a fantastic hero. He has a good job and works hard. He's honest and I loved what he admitted to Rory about how he feels about her; the direction he wants their relationship to take if she's willing; and the admission Max makes about their rocky past, so they can both move forward from it.


Overall, this was a really good novella that encompassed a strong romance, well-written dialogue and two incredible characters that kept me entertained from start to finish. The way this story ended was delightful, as Max defended Rory when it came to her family. How could her stepdad be so judgmental without giving her a chance to explain her reasons for arriving when she did, instead of when they thought she'd arrive? I would recommend One Snowy Night by Jill Shalvis, if you enjoy books by Jill Mansell, Debbie Macomber, Nora Roberts and Marie Force.
OVERALL RATING:

It’s Christmas Eve and Rory Andrews is desperate to get home to the family she hasn’t seen in years. Problem is, her only ride to Lake Tahoe comes in the form of the annoyingly handsome Max Stranton, and his big, goofy, lovable dog Carl.

Hours stuck in a truck with the dead sexy Max sounds like a fate worse than death (not), but Rory’s out of options. She’s had a crush on Max since high school and she knows he’s attracted to her, too. But they have history… and Max is the only one who knows why it went south.

They’ve done a good job of ignoring their chemistry so far, but a long road trip in a massive blizzard might be just what they need to face their past… and one steamy, snowy night is all it takes to bring Max and Rory together at last.
Buy Links:       Amazon | B & N | Google | iTunes | Kobo

Christmas Eve had the nerve to show up just like it did every year: way too quickly and with ridiculous fanfare.
The nerve.
Rory Andrews stood in the courtyard of the Pacific Pier Building in San Francisco, surrounded by sparkly holiday lights and enough garlands to give the place its own ozone, and told herself things could be worse.
She just wasn’t sure how.
It was the unknown, she decided. Because this year, unlike the past six, she’d be spending Christmas with her family, a thought that caused a swarm of butterflies to take flight in her belly.
Not an uncommon feeling since she’d turned twenty-three a few months back and decided it was time to become a person she could be proud of if it killed her. And given the guy leaning against one of the lamp poles clearly waiting for her, arms crossed, frown in place, it just might.
Max Stranton. At his side sat Carl, his huge, eternally hungry, adorable Doberman.
“No,” she said, not to Carl but to Carl’s owner. Who was not lovable. “No way.”
As always when their gazes locked, Max’s was a disconcerting mix of heat and . . . something else that she couldn’t quite figure out, as he was good at hiding when he wanted to be. She never quite knew how to take the heat because it seemed reluctant. He was attracted to her but didn’t want to be.
Ditto. He made her knees wobble. And also a couple of other inner reactions that shouldn’t be happening in public.
“Merry Christmas to you too, Rory,” he said, and damn. It wasn’t just his eyes. His voice was rough and sexy, and for that matter, so was the rest of him.
He worked for an investigations and security firm in the building. Basically he and the rest of his team were fixers and finders for hire. To say that Max was good at his job was an understatement. He stood there looking like sex on a stick with a duffle bag slung over a broad shoulder, his dark hair two weeks past needing a cut, and the icy wind of an incoming storm plastering his clothes to a body that could be registered as a lethal weapon.
“What are you doing here?” she asked calmly even if her heart was anything but, pounding all the way up to her throat and ears because she knew. She knew exactly why he was here. “I don’t need a ride home.”
A flash of wry humor slid in with all that sizzling heat. “Because you’d rather take two buses and a train than get into my truck with me?” he asked.
Well yes, actually. 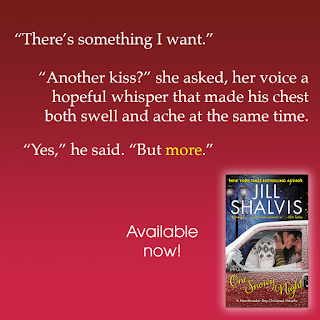 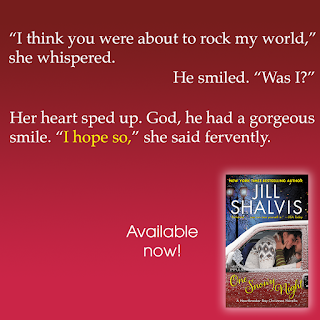 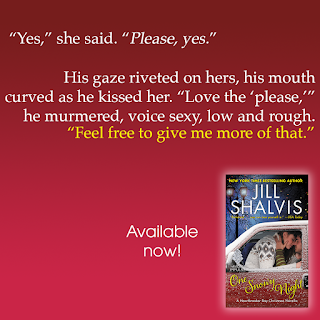 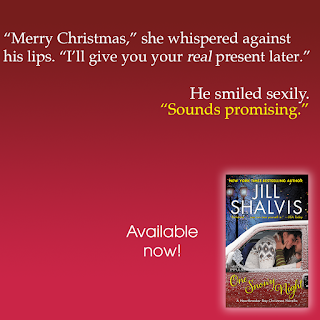 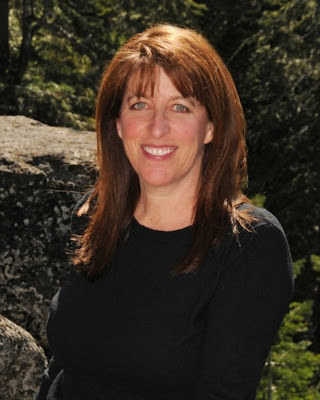 New York Times bestselling author Jill Shalvis lives in a small town in the Sierras with her family and far too many assorted quirky characters. Any resemblance to the quirky characters in her books is, um, mostly coincidental.

Look for Jill's latest, SWEET LITTLE LIES on shelves and e-readers now, and get all her bestselling, award-winning books wherever romances are sold.