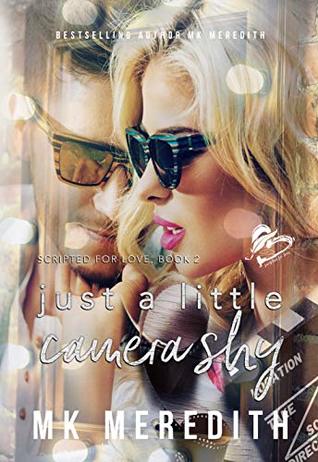 In Just a Little Camera Shy (Scripted for Love #2) by MK Meredith, Addi Dekker is a desperate woman. If she doesn't come up with enough money to pay taxes on her property, she'll lose the home she inherited from her great-aunt. So, when Roque Gallagher comes to her with the idea of renting her house to film a movie, she jumps at the chance after a moment of hesitance. However, she wants more out of the deal such as a job. But working alongside Roque might just prove harder than she thought, especially when she's keeping things from him and when he discovers the truth, will he be able to forgive or will they lose their shot at happy ever after?

Having really enjoyed the first book of this series, I couldn't wait to read what sort of adventure Ms. Meredith would take me on this book and I've got to say that this story does not disappoint. Really, right from the beginning, I was intrigued by this story, as the hero is charming and determined to get what he wants. Will the hero use any means necessary to win the heroine over? However, it was the moment they meet where this story really takes off, as the heroine doesn't make things easy for the hero. She's determined to get what she wants too and I liked how she used any means necessary to get what she wants.

As for the dialogue, it was intense and absolutely riveting due to the main characters back stories and everything this couple go through on their journey to happy ever after such as what the heroine is keeping from the hero that could ruin their growing relationship if the hero learnt the truth and whether the hero would be able to find a way to make his movie considering all the troubles he has. Moreover, I loved the main characters who are relatable, likeable and kept me entertained from start to finish, as the hero does his best to resist the heroine, but finds it impossible to resist her.

With the heroine, she's resilient, courageous and I liked how she fights for her independence because her family are a little smothering and feels she needs to be protected when she doesn't. Really, she can handle things fine on her own when she puts her mind to it. I also liked the decisions she made throughout this story, even if the thing she's holding back from Roque could cause a rift in their relationship. Yet, what I liked most about the heroine was her sassiness and her enjoyment of teasing Roque. While the hero, he's driven, which is proven by his ambition to produce a film without help from his family because he wants his own success and not to ride the wave of his family's success. I also liked the hero's resilience; his honest nature; and that he took a chance on the heroine, even though his relationships haven't been all that good in the past because work is the most important thing to him.

Overall, Ms. Meredith has delivered an absolutely charming and superb read in this book where the chemistry between this couple was off-the-charts; the romance was tangible and full of exquisite heat and passion; and the ending had me liking the hero's determination to win back the heroine, especially after how their relationship goes awry. Did the hero judge the heroine too harshly? Did the heroine handle everything wrong when it came to what she was holding back? However, it was the epilogue that wrapped this story up nicely, as the hero and heroine are so happy together. I would recommend Just a Little Camera Shy by MK Meredith, if you enjoy workplace romances, boss-employee romances or books by authors Marina Adair, Catherine Bybee, Jill Sanders and Melissa Foster.

On the verge of losing the Malibu home she inherited from her great-aunt, Addi Dekker is failing hard to show her family she can make it as a writer. If she doesn’t want to give up her dream and go back to the soul-sucking job she happily left behind, Addi has to swallow her dislike of Hollywood and rent her bungalow out to the sexy-as-hell film producer who stole from her. But, she has a plan (shhhh!) she'll stay out of the camera's eye and keep living there, too. It was time for Tinseltown to pay up. Roque Gallagher is pouring his heart and savings into his first independent film to make the industry acknowledge him for his talent and not just his family name. Addi’s home is perfect for the shoot, but she’s far too tempting. He’s never been able to handle work and a relationship, and this is the film of a lifetime. Between a shrinking budget and his director quitting, the last thing he needs is a sexy-as-sin tease like Addi. And he has a feeling there's something she's hiding...