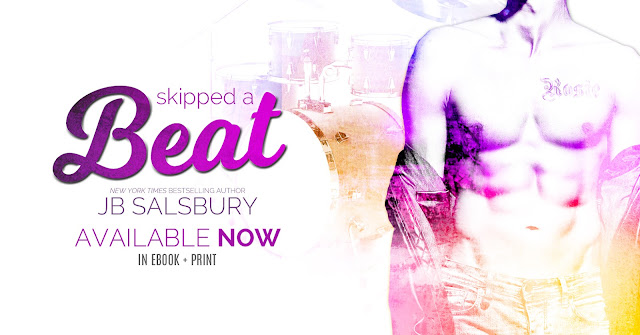 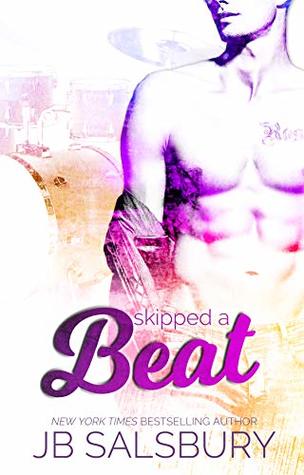 Ryder Kyle is a spoiled, self-righteous jerk.
He doesn’t understand suffering. Entitled guy like him wouldn’t recognize desperation if it smacked him in his perfect face. I don’t need him, but I do need a ride west. I won’t let the guy who reminds me of the mess I left behind interfere with my plan to get to Los Angeles.
This woman is nuts!
People don’t sneak on a tour bus looking for shelter. That’s what crazy fangirls do, but she's far from a fan. She says she’s homeless and asks for help by throwing insults. Her words are like a viper strike and she’s made me her target. We’re dumping her at the next stop. Skipped a Beat is an enemies to lovers rock star romance that proves one seemingly insignificant choice can change the path of an entire life.

In Skipped a Beat (Hate, Love, Rock 'n' Roll #2) by JB Salsbury, Jade has fallen on hard times. Needing to get to Los Angeles, she decides sneaking onto a band's tour bus is her best option and no one is going to stop her from getting where she wants to go, especially not the spoiled, egotistical Ryder Kyle. However, the more time Jade spends with Ryder, the more she finds herself falling for a guy she shouldn't. Will Jade and Ryder get the happy ever after they deserve?
Ms. Salsbury has a sublime writing style that I thoroughly enjoy every time I read one of her books and this one was no different. Really, right from the beginning I was absolutely hooked, especially since the prologue shows how desperate the heroine is to help someone she loves and it ends up turning her life upside down. However, it was from the moment the hero and heroine meet where this story really takes off, as Jade is desperate and needs a little understanding from someone about her situation. Yet, it seems Ryder is ready to see her gone. Then again, is it because he feels an instant connection with her or is he worried she's a crazy person that has somehow managed to sneak onto their bus?
As for the dialogue, it was absolutely entertaining because the main characters are memorable, relatable and likeable right from the moment each are introduced into the story and I couldn't wait to read more about the hero and heroine and what obstacles they would have to face to be together. Will the heroine be able to put her trust in Ryder after her last relationship? Moreover, both the main characters are delightful and I loved their growing relationship, as they start off as enemies but begin to realize that it's not so bad having the other around, especially when there's so much chemistry between them that Ryder is determined to ignore because he's honorable and loyal and would never do anything to hurt someone he cares about.
With the main characters, the heroine is resilient; courageous; feisty; defensive at times when she believes people make the wrong assumptions about her; and I liked that she gave the hero a chance, even though he's her total opposite and reminds her of the man she left behind and who turned on her the second she threatened his perfect life. Then again, I loved how Ryder proves her wrong with how willing he is to support her through thick and thin, even when something big happens that could change things between them. While the hero, he's sexy; confident; charming; a good guy by the decisions he makes to do right by someone he once cared about; a good friend in what he does for one of his bandmates; and I loved his determination to prove himself to the heroine. He's nothing like her ex and wouldn't do anything to hurt her.
Overall, Ms. Salsbury has delivered a wonderfully-crafted, heartfelt, captivating read in this second book of her Love, Hate, Rock-n-Roll series where the chemistry between this couple was off the charts and had me loving the sexual tension between this pair that spilled over onto the pages in sizzling sex scenes; and the ending had me hoping that Ryder would be able to convince Jade that they belong together and they shouldn't let anything stop them from achieving their happy ever after despite the major obstacle that Jade thinks Ryder might not be happy about. However, it was the epilogue that wrapped this story up nicely, as Ryder and this couple's friends and family are willing to do anything to make the hero and heroine's life together the best it can be without any complications. Will Ryder and Jade get their way when it comes to something very important in their lives? I would recommend Skipped a Beat by JB Salsbury, if you enjoy the enemy to lovers trope, the opposites attract trope or books by authors Corinne Michaels, Penelope Ward, Kristy Bromberg and Vi Keeland.